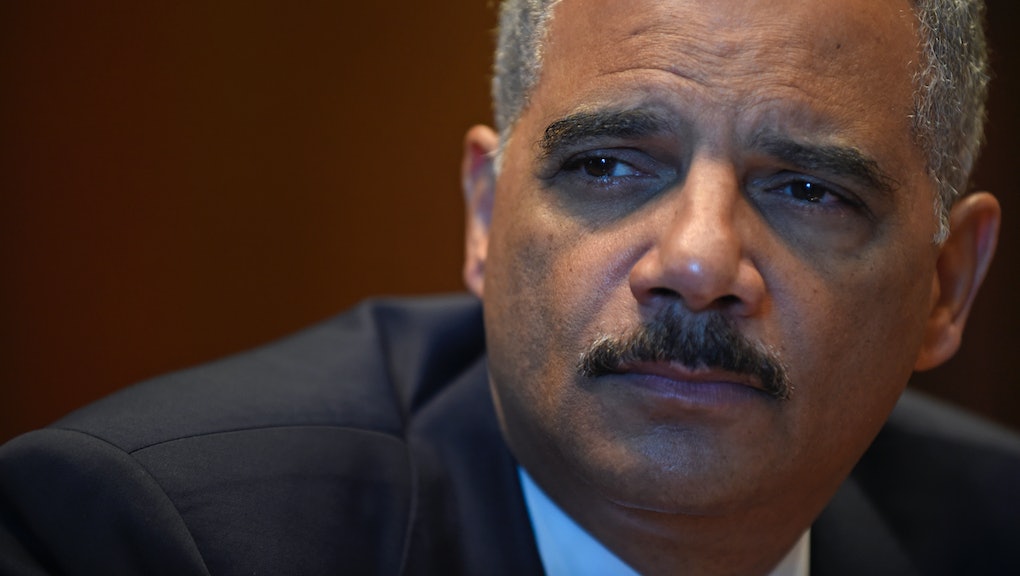 Eric Holder may be leaving his job, but he has at least one more big trick up his sleeve.

In an interview with Yahoo News released right before NPR broke the news of the attorney general's planned resignation, Holder questioned the war on drugs and said government officials should consider decriminalizing marijuana.

"We have seen taken from various communities across the country young men [who] didn't need to go to jail for as long as they did," he told Katie Couric, referring to nonviolent drug offenders being locked up for years. "I'm determined to confront [this problem] as long as I'm attorney general."

"As long as I'm attorney general" might end up being longer than Holder expects. He won't step down until a successor is confirmed by the Senate, a process that could stretch well into next year.

Still, a self-imposed lame duck period could give him the freedom to speak a little more openly on issues like drug legalization. In his conversation with Couric, he highlighted marijuana's classification as a Schedule I drug, which means it's treated like heroin, LSD and Ecstasy in the eyes of the federal government.

The Justice Department is currently in the process of granting clemency to any nonviolent federal drug offenders who have served at least a decade in prison.

Marijuana's potency relative to heroin is not the only reason for the re-evaluation. Federal and state governments' approach to the war on drugs has led to distressingly unequal treatment and racial discrimination, and Holder thinks the government's approach to the drug needs to be overhauled.

Black Americans comprise 35% of those arrested for drug possession, 55% of those convicted and 74% of those imprisoned, according to the ACLU.

It all factors into larger problems of law enforcement and race, which Holder wasn't shy about addressing with Couric. "You know, I'm attorney general of the United States," he said. "But I'm also an African-American who has been stopped unnecessarily."