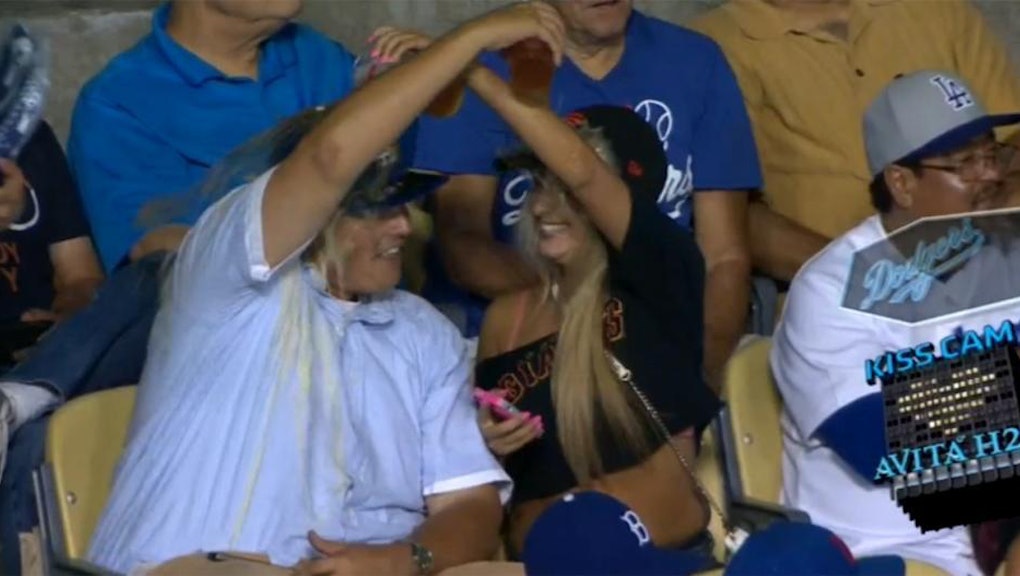 Now This Is How You Capitalize on a Kiss Cam

We've all seen it, the dreaded "Kiss Cam."

The even more awkward cousin of the "Dance Cam" and "Smile Cam," the "Kiss Cam" makes most sports fans cringe at the very thought of getting themselves thrown up on the big screen for tens of thousands of fans to see you awkwardly smooch — or avoid smooching — whoever happens to be in the next seat over.

A couple caught in the cross-hairs at Wednesday's Giants-Dodgers game, however, managed to flip the script in their own unique way.

That’'s right. Instead of a perfunctory kiss like the couples before them, these apparent frenemies dumped beers on one another. It's fitting that a Giants fan would pour beer on a Dodgers fan and vice versa, but it's not something commonly seen on the Jumbotron.

Other fans have simply refused in creative ways, like these siblings at a University of Minnesota hockey game. Other fans seem to enjoy it, like President Barack Obama at a U.S. men's basketball team event.

Either way, these fans had a good time and made light of the worst gimmick in sports. Believe us, it could have been worse.