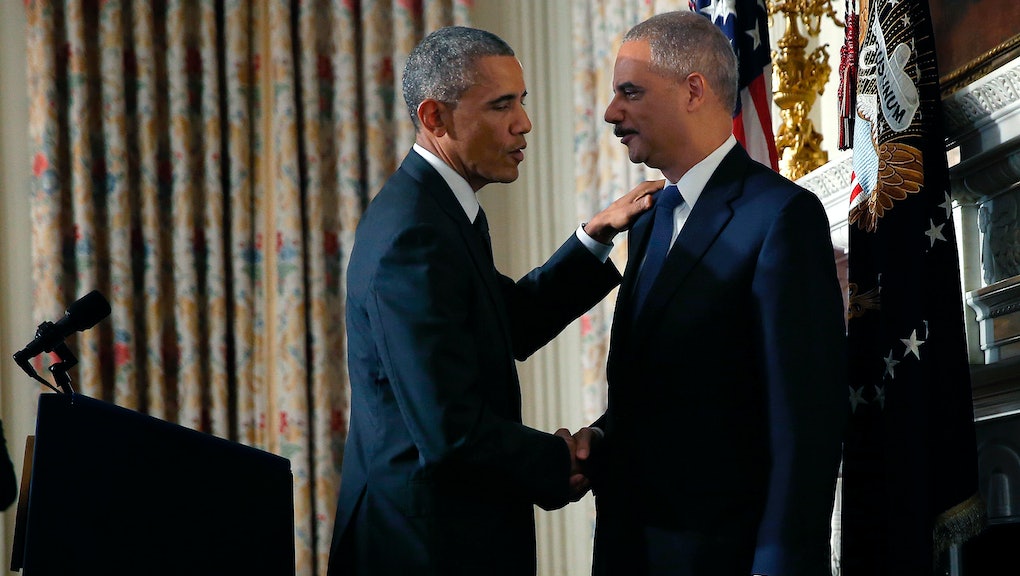 Eric Holder did a lot of good during his time as attorney general, including working on gay rights, taking steps toward prison reform and talking about race in a way the president couldn't. But there's one area where he didn't do nearly as much as he could have.

The financial crisis, perhaps the event that has shaped the Obama presidency the most, came and went with a disappointing lack of prosecution for those responsible for tanking the nation's economy.

Not everyone got off completely scot-free on Holder's watch, but the punishments that did come were often relatively minor fines and penalties against financial institutions themselves, and sometimes didn't even require an admission of guilt.

The federal government settled with Citigroup for $7 billion, JPMorgan Chase for $13 billion and Bank of America for a record $17 billion. But those figures aren't always what actually ends up being paid — Bank of America, for instance, may only have to pony up $12 billion.

As the New Republic points out, Holder's unwillingness to prosecute banks even won out when the bank in question was eminently prosecutable, like when HSBC was caught laundering money for drug cartels. "I am concerned that the size of some of these institutions becomes so large that it does become difficult for us to prosecute them when we are hit with indications that if you do prosecute, if you do bring a criminal charge, it will have a negative impact on the national economy, perhaps even the world economy," Holder said at the time.

HSBC was too big to bring to justice. It escaped with a $2 billion settlement.

In a ceremony celebrating Holder and announcing his resignation Thursday afternoon, President Obama countered critics, saying, "Since 2009 the Justice Department has brought more than 60 cases against financial institutions, and won some of the largest settlements in history for practices related to the financial crisis, recovering $85 billion, much of it returned to ordinary Americans who were badly hurt."

And more cases are likely to come. Holder announced earlier this month that Wall Street executives are being investigated for a "troubling return" to the kind of action that preceded the recession, and that criminal charges would be filed, according to USA Today.

"We are making good progress in these cases, which involve conduct that has undermined the integrity of our markets," he said during a speech Wednesday at New York University's School of Law. "We need not tolerate a system that permits top executives to enjoy all of the rewards of excessively risky activity while bearing none of the responsibility."

Just how much responsibility was actually borne by executives, though, is certainly up for debate.