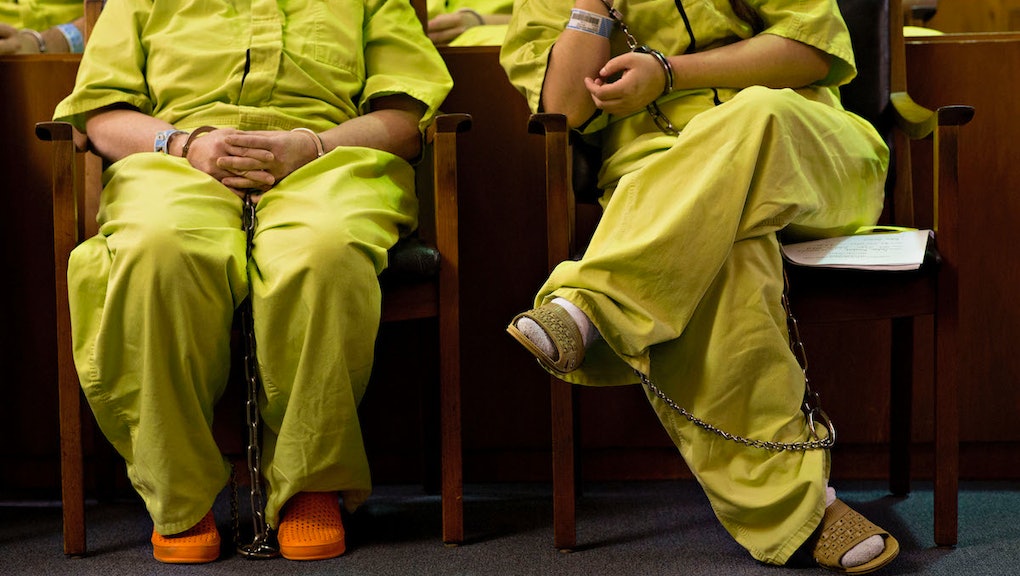 As you can see, it's not even close. Citing data from the International Center for Prison Studies, Niall McCarthy of Statista visualizes how the United States housed nearly one-third of the globe's incarcerated women in 2013. It's a huge problem the American public has only begun to recognize.

The context: Recently, discussions around the rise of mass incarceration have focused largely on men, most notably, black men. Illustrating this is how 1 in 10 black American males is in prison on a given day, while black men remain nearly six times as likely to be imprisoned in their lifetime than their white peers.

While those figures are staggering, they're also part of a much larger story. Considering that its total prison population grew by 500% in the past 30 years, it might seem unsurprising that America locks up so many women compared with the rest of the world. But there's another problem: Growth in the number of female prisoners was nearly 1.5 times that of men for this period.

The reasons: According to the Sentencing Project, the war on drugs is the biggest factor behind why more women are being imprisoned today than ever before.

At the same time, the dynamics of this growth have undergone a major shift. During the 1980s, harsh (and racist) sentencing policies made black women the primary female casualties of the crack epidemic, including those most often imprisoned. Not so much since 2000: The prevalence of methamphetamine in America's heartland has sparked a 48.4% rise in the number of white women imprisoned over the past decade, compared with a 24.6% decline in the number of black women.

A prime microcosm is the state of Oklahoma, which houses both the highest volume of meth labs in the country and the highest per capita female incarceration rate in the world, according to Brave New Films. Between 2000 and 2008, 34% of incarcerated women nationwide were locked up on meth charges, while 80% were there for non-violent offenses.

The results: In any case, the social costs of this rise have been uniquely devastating.

Brave New Films recently aired an educational short that claimed the following: Not only are a significant percentage of women pregnant when imprisoned, more than 70% are also the primary caregivers of at least two minors. This spells disaster for many families, as children of the incarcerated are systematically dumped into the notoriously problematic foster care system, or "other [similarly] unstable situations."

On top of which, children of incarcerated parents are five times more likely than their peers to commit crimes.

It gets worse: In terms of the women themselves, female inmates face both higher rates of sexual abuse, mental illness (73% versus 55% for men) and chronic or communicable medical problems (59% versus 43% for men) than their male counterparts, the Sentencing Project reports.

According to Newsworks, the hiring discrimination that ex-convicts face when looking for work may also be especially pronounced for women. A 2010 Arizona State University study found that 57% of the 50 employers they polled would have called back hypothetical male applicants with a criminal record, but when it came to women with the exact same record, that number dropped to 30%.

A global crisis: Yet perhaps the biggest revelation about the roots of America's female prison boom comes when you compare it to other countries.

Specifically, in most nations with comparatively large numbers of incarcerated women, as conveyed in McCarthy's map, they are generally being punished for the same reasons. Thailand, which has the largest percentage of female prisoners (14.6%) in the world relative to its male prisoner population, as well as Brazil, Mexico, Russia and others, boast an overwhelming number of women imprisoned on (wait for it) drug-related charges — just like in the United States.

So: While the U.S. jails women at relatively staggering rates, it seems the problem leading them there most frequently is the same, or at least similar, around the world. And since prison has repeatedly proven itself to be one of the least cost-effective and socially constructive ways of preventing crime, it follows that a massive reevaluation of global drug policy is in order.