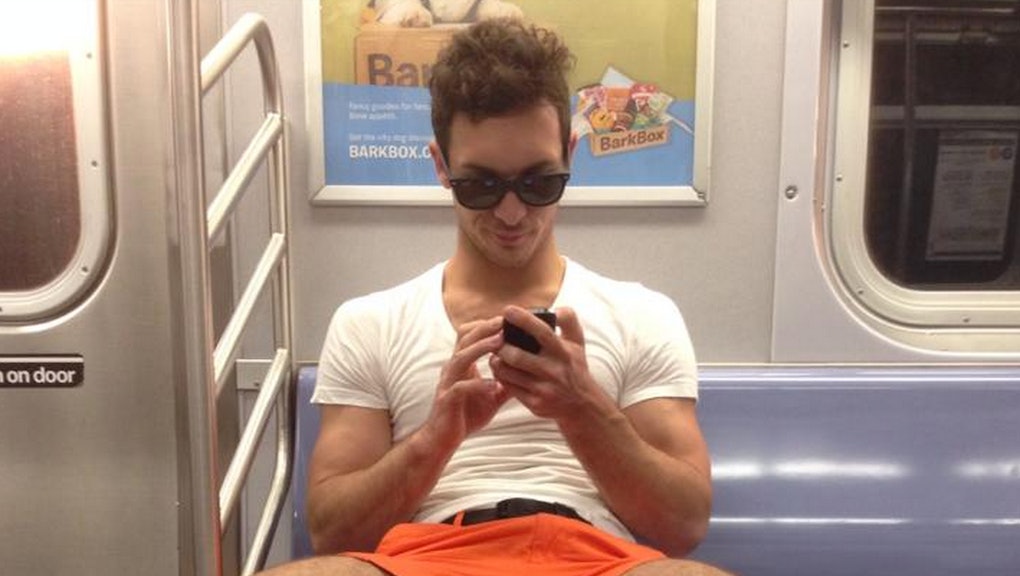 Hey, bro, you're not that well-endowed.

When a woman takes her seat, she occupies the given space with legs crossed or neatly positioned. As for men? Far too many have been observed sitting with their legs spread wide open, encroaching upon the personal space of everyone around them, especially women.

Needless to say, women are fed up with this lack of consideration.

To protest what's almost certainly a display of male entitlement and privilege, women from all over the world are fighting back the only way they know how, using cameraphones to capture this reality of the daily commute.

Recently, photographic evidence of these unsavory moments have cropped on more than a few dedicated Tumblrs, each snapping an effort to show men the severity of the issue.

So much more than an inconvenience, however, the issue hints at what many women are taught from an early age — that girls are to take up as little space in public as possible, especially if that space is also inhabited by men. It's a trend roundly critiqued in a viral 2013 poem performed by Wesleyan University student Lily Myers, in which she testified to witnessing generations of "shrinking women" in her family and all around her.

Feminista Jones, a columnist and social justice advocate and organizer, recently sounded off online about the trend as she's observed and experienced it firsthand, sharing photos and directing many others to blogs such as Men Taking Up Too Much Space On the Train and Move the Fuck Over, Bro. Jones said the issue reflects a world where the experiences and bodies of men take center stage — literally — and where most men will place their own comfort above the needs of others, including women.

"Girls are raised to cross their legs when they sit and they're told it is 'ladylike.' We're supposed to keep our legs closed as a way of not offering access to our intimate parts," she noted. "Men, on the other hand, are raised to embrace their virility and assert themselves boldly, especially in public spaces. Claiming physical space is a subtle way of marking territory and taking ownership of their piece of the world."

Apparently, one of the most common defenses of this practice from men, is that then the extra space to air out their nether regions. The operators of Men Taking Up Too Much Space On the Train have received such strong negative reactions from men arguing in self defense, that they created a running poem entitled, "Men Defending Their Balls."

But there are more than enough men who sit with their legs relatively closed, allowing others nearby to have a seat without competing with the intrusion of a spread-eagled leg.

So what's the solution to all of the fuss?

"[Men] can begin by being considerate, closing their legs, and occupying one space. If they're larger men, that may be hard, but they can at least make an effort," Jones noted. "There's no reason to remain seated if there is someone in need who is standing. At least try to close [your] legs and make some space."

Makes sense to us.