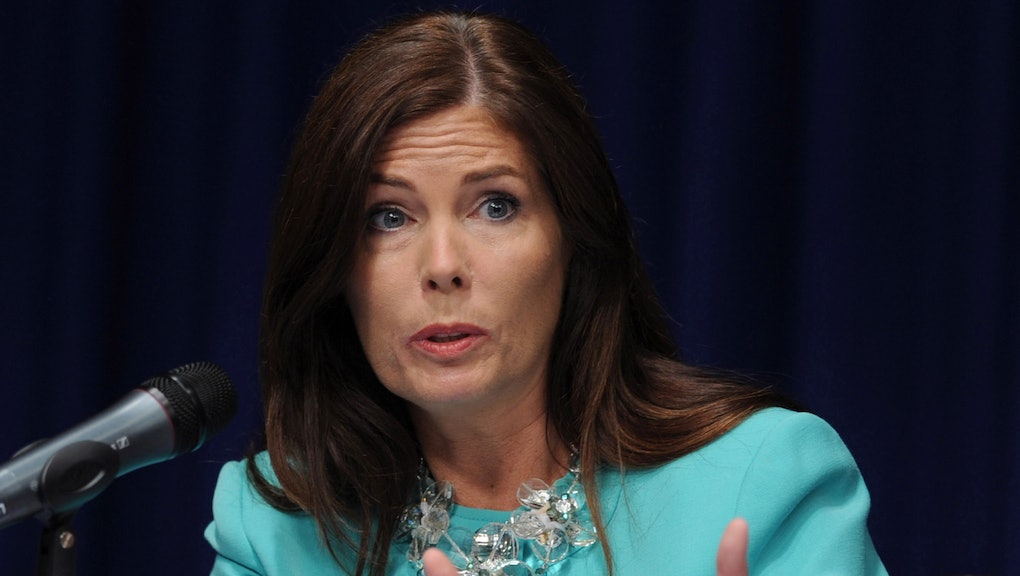 In July 2013, a state employee at a state prison in Pennsylvania was raped by an inmate who gained access to her office. Now, the young woman is being victimized all over again by Pennsylvania Attorney General Kathleen Kane, who has argued the woman was partly at fault for her assault.

The 24-year-old typist who worked at the State Correctional Institution-Rockview in Bellfonte, Pa., was knocked unconscious and raped for 27 minutes by inmate Omar Best. Best had a track record of preying on women, according to ThinkProgress, including a prior rape and attempted rape confessions when he was transferred to Rockview.

As the state's attorney general, Kane is tasked with defending the state and authorities at the Department of Corrections from a federal lawsuit brought by the rape victim in April. Incredibly, she is blaming the victim as part of her legal strategy.

"Some or all of the damages plaintiff have alleged are in part, or substantially due, to the acts of third parties other than the answering defendants," she wrote in court filings, according to the Centre Daily Times. "And/or plaintiff acted in a manner which in whole or in part contributed to the events which led to the damages plaintiff has alleged in her complaint."

The victim said she had repeatedly told supervisors that inmates were moving freely in the hallways and near the stairs near her office and "that she was uncomfortable when Best entered her office," Philly.com reported. Her superintendent, Marirosa Lamas, who moved the clerk's office from a secure floor to one with a cell block, was terminated from her job. Yet Kane is pursuing the "contributory negligence" defense because, the lawsuit states, "There were no locked doors between the offices and cell blocks, including Block C where (the victim) worked, except for the copy room."

The victim's lawyer and women's advocates have taken exception to state's position.

"It is troubling and disturbing that they would take a position so contrary to the position the district attorney took in the criminal case," the victim's lawyer, Clifford Rieders, of Rieders, Travis, Humphrey, Harris, Waters & Waffenschmidt in Williamsport said, according to the Centre Daily News. "That is unbelievable," agreed Centre County Women’s Resource Center Executive Director Anne Ard. "This kind of victim-blaming is unconscionable and, frankly, makes people distrust the justice system. I am appalled."

Kane, touted last year as the Democratic Party's new "it girl," is taking heat for her line of defense, despite feigning ignorance in a statement to CNN.

"This initial filing should not necessarily be interpreted as meaning this defense will be pursued throughout the entire case," the statement read, asserting that "Kane was not aware her senior deputy included that defense in his filing."

This irony turns hypocritical when trying to rationalize Kane's position as "simply doing her job." In fact, she has on occasion explicitly opposed the state's position, as in the case of her refusal to support Pennsylvania's former ban on same-sex marriage.

The unfortunate consequence in this case is that a 24-year-old is being blamed for her rape. Instead of understanding that "rape is rape," Kane, whether through her words or those of her deputy's, is finessing an inexcusably violent act to reposition the blame on the victim.

This is not unique. Take, for example, a judge from Montana who sentenced a 14-year-old girl's rapist to 30 days in prison because, the judge said, the victim behaved "older than her chronological age" and she was "as much in control" of the situation as her adult male rapist.

What this conveys is that women cannot rely on the justice system or lawmakers to protect them, suggesting that "rape culture" extends beyond the streets and is more insidiously, systemically rooted in the institutional structures of society.