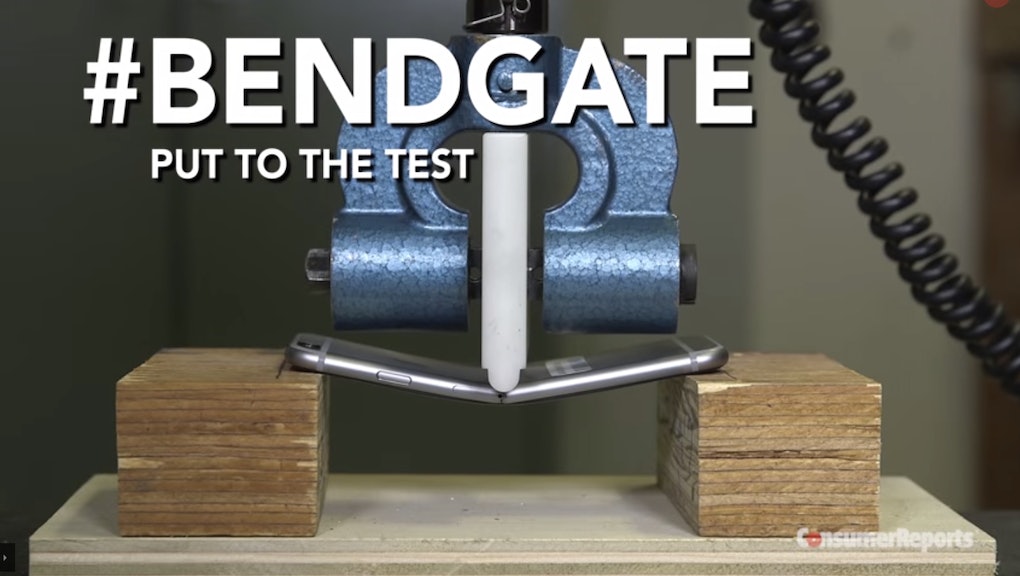 The news: #BendGate, the term for the ridiculous hand-wringing over whether the iPhone 6 and 6 Plus are too flimsy, is everywhere. KitKat tweeted about it, as did Samsung, which used the opportunity to poke fun at its competitor. Conan O'Brien made a video about it, and notorious spoon-bender Uri Geller even weighed in on why the bending happens in the first place.

Much like the antenna-related issues plaguing previous generations of iPhone, #BendGate has taken on a life of its own, and despite Apple's denials, people are still lambasting the company for the perceived flaw.

Enter Consumer Reports, the website that reviews and ranks different products with some actual science and thought behind their reviews. In response to the debate, they decided to perform their own pressure test on a range of phones, including the iPhone 6, 6 Plus and the Samsung Galaxy Note 3. "Everything about the uproar was highly unscientific. We don't like unscientific," they wrote.

They went beyond Apple's own test, applying about 55 pounds of force, the same required to break three pencils. They started out by applying 10 pounds of pressure for 30 seconds and increased the force by 10 pound increments. They then documented at what point the phones began to "deform."

The results: Sorry, #BendGate-rs, it turns out your uproar was all for nothing.

"Our tests show that both iPhones seem tougher than the Internet fracas implies," reported the website. The iPhone 6 Plus was a tad more durable than the iPhone 6 — the 6 Plus held up until 90 pounds, and came apart at 110 pounds, while the 6 began deforming at 70 pounds and came apart at 100. Suffice it to say that you'll need to do a bit more than just push really hard with your hands to bend it.

The strongest of the bunch was the Samsung Galaxy Note 3, which took a whopping 150 pounds to deform and separate — a force much stronger than anyone would normally encounter when sitting down with their phone in their pocket. Despite the damage, some of the phones continued to function: The screens still lit up and were sensitive to the touch, and one was still able to make calls.

The moral of the story? It seems like Apple's claims that only nine people have actually complained may indeed have some merit. We've finally reached peak #BendGate — wake us up when it's over.