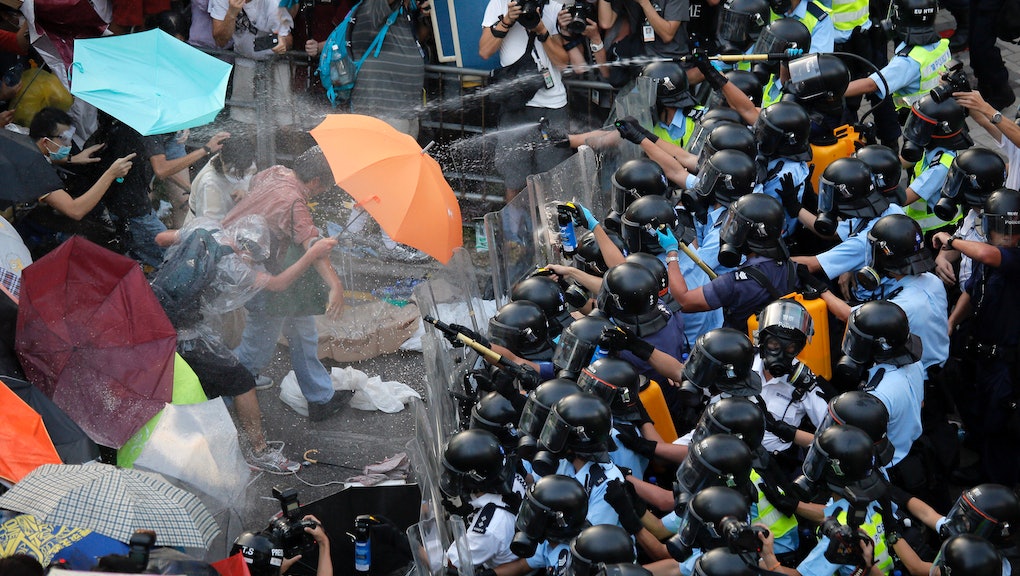 The news: The pro-democracy protests that exploded Hong Kong this weekend aren't going away anytime soon.

Thousands of people flooded the streets of Hong Kong this weekend in student-led protests against city authorities. The New York Times reports that local police intensified efforts to suppress the the ongoing demonstrations, bringing a bevy of less-lethal equipment like tear gas grenades, pepper spray, long-barreled guns and riot shields and truncheons. On Sunday, several student groups dispersed after rumors began to circulate that the police would use rubber bullets. The new crackdown has led to 34 injuries and 78 arrests.

Why are these people protesting? Hong Kong is a special administrative region in China with a semi-autonomous government where, compared to other Chinese citizens, residents enjoy more liberal restrictions on human rights. But after the Chinese government opened elections for Hong Kong's top leadership position in August and restricted the ballot to only those candidates supported by Communist Party officials in Beijing, student activists rallied as many as 60,000 people to the streets to denounce what they saw as a naked power grab by Chinese authorities.

"They are not honoring 'one country two systems,'" protester Ed Chin told the Los Angeles Times. "This is exactly the tactics they want to use — scare tactics, creating social unrest, making people unhappy."

Protesters are demanding the resignation of the city's top civil official, Chief Executive Leung Chun-ying, and three others involved in the reform project, and have claimed that they are prepared to boycott school and remain in the streets if their demands are not met. In an op-ed for CNN, Leung defended the reforms as compatible with universal suffrage, arguing that China's central government had always had full legal authority over Hong Kong. He and other government officials described the protests as illegal, with one spokesperson accusing the students of "damaging rule of law and social order."

Chinese University of Hong Kong's professor Willy Lam shot back, telling the Los Angeles Times that the crackdown was a "massive show of force by the Chinese and Hong Kong government against an agitated Hong Kong public that is increasingly mad." He added that there were "credible reports" military units were possibly preparing to intervene.

Here's some of the many photos coming out of Hong Kong:

Police attempted to subdue protesters with pepper spray, but some appeared to be wearing protective masks.

Many protesters used umbrellas as the police used water hoses:

The authorities made extensive use of tear gas as well:

Some of them were dressed in paramilitary fashion and toting tear gas launchers, like these police officers outside Hong Kong's civil government complex:

Protesters tied yellow ribbons to the outside of government buildings:

The protesters blocked roads and halted traffic throughout the night:

Hong Kong police say they have arrested at least 78 protesters:

Here are some other scenes from the protests: