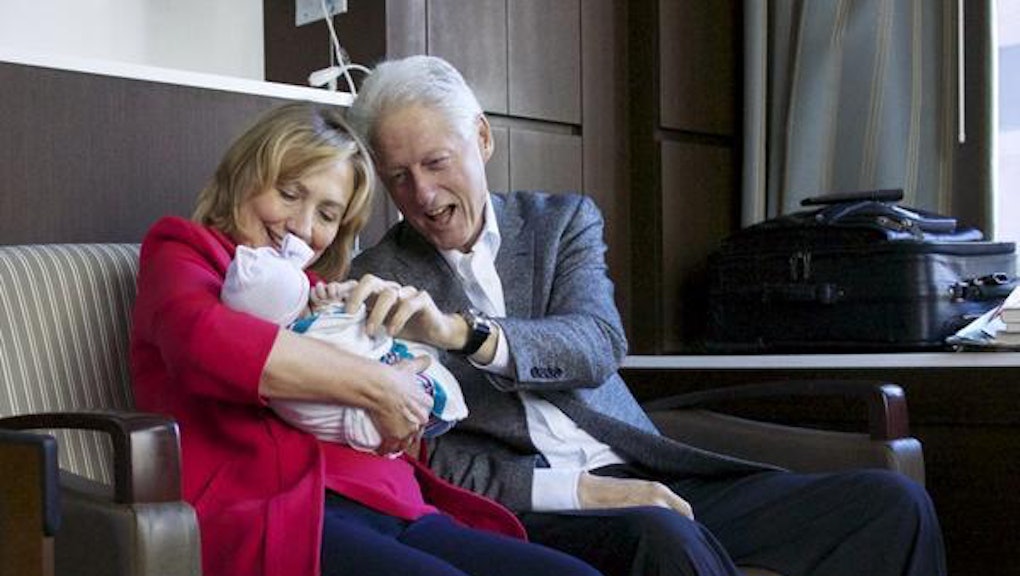 Bill and Hillary Clinton told the Associated Press they are "blessed, grateful and so happy" to become grandparents. But naturally, every political reporter country has been obsessively speculating on how the birth of Chelsea's first child will shape Hillary Clinton's potential run at the White House in 2016 (because it's never too early, apparently). The National Review's Jim Geraghty captures this facile obsession perfectly:

You'd think Geraghty's point — that the nation's political press, the people who are supposed to serve as watchdogs in Washington, are prone to hysterical speculation on every aspect of federal elections — is rather absurd, but it's apparently not.

The Huffington Post's Caroline Bologna, before Charlotte's birth: "As anticipation builds for the birth of Chelsea Clinton's first child with her husband Marc Mezvinsky, people are abuzz with speculation (and unsolicited advice) about the name. A Politico piece suggested that the couple aid grandma-to-be Hillary in her likely presidential campaign by picking one of the most popular names in Iowa and New Hampshire. The Washington Post recommends that they take it a step further and look into which baby names will be most appealing in 2016."

Politico's Katie Glueck: "The news of Chelsea Clinton's baby comes as most observers assume that Hillary Clinton will run for president. Hillary Clinton has said she wants to fully experience being a grandmother ahead of making a decision about her presidential plans."

Then there's this, from the Associated Press (as published on the website of the Christian Science Monitor):

The baby has been eagerly anticipated as Hillary Clinton considers her political future — she has called the prospect of becoming a grandmother her "most exciting title yet" ... The former secretary of state has said she didn't want to make any decisions about another campaign until the baby's arrival, pointing to her interest in enjoying becoming a grandmother for the first time. If Clinton decides to run for president, her campaign would coincide with the baby's first two years.

And then this garbage from the New York Post: