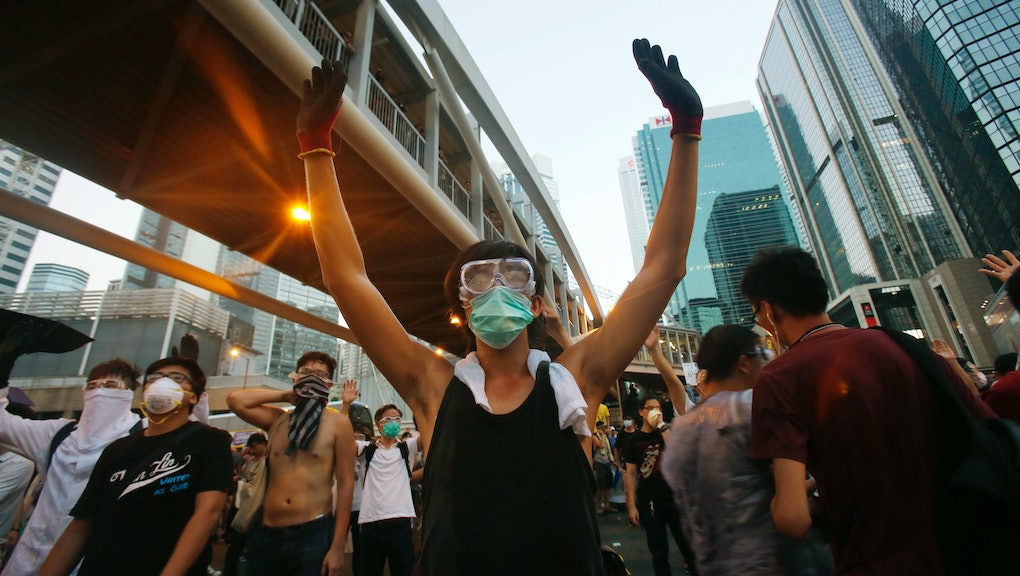 Ferguson and Hong Kong Have One Important Thing in Common

The news: If you've been keeping up with the images of protests coming out of Hong Kong, you might have noticed a recurring gesture among the protesters.

That's right: To demonstrate peaceful intent to the riot police, protesters have been raising their empty hands in the air.

A common thread: As many online commentators have noted, there's a striking similarity between the gesture of the "umbrella revolution" taking place in Hong Kong and the "hands up, don't shoot" gesture from the protests in Ferguson, Mo.

Is there an actual connection? It doesn't look like the hands-up gesture by Hong Kong protesters is a callback to the events still unfolding in Ferguson. As reported by Quartz, "The gesture is a result of training and instructions from protest leaders, who have told demonstrators to raise their hands with palms forward to signal their peaceful intentions to police."

While the gesture might not have been a deliberate cultural reference like Thai protesters adopting the Hunger Games salute, the unplanned nature of its similarity to the Ferguson gesture makes it all the more powerful: Although the two sites of protest are a world apart from each other and are fighting against very different sociopolitical issues, both movements are dealing with police brutality and demonstrating peaceful intent in an act of nonviolent civil unrest.

And the fact that Ferguson protesters are marching in solidarity with the Hong Kong protesters makes it all the more moving:

Ferguson and Hong Kong may face different conflicts, but some sentiments truly are universal.