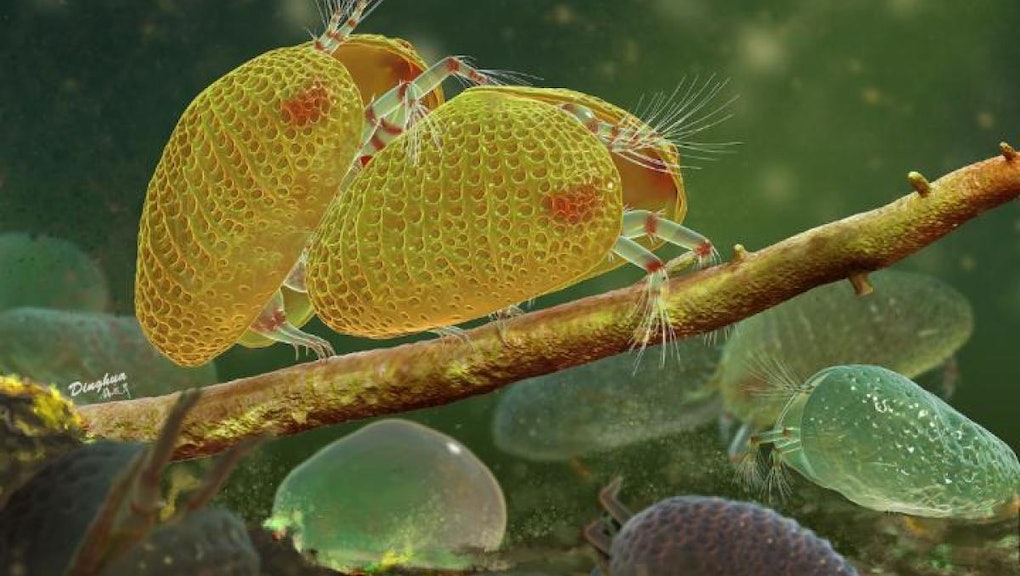 Proceedings of the Royal Society B: Biological Sciences

Life is filled with big questions. Are we alone? What is our purpose? Is there 100 million-year-old animal ejaculate preserved perfectly in a block of amber? Finally, one of those has an answer. A paper published Thursday in the journal Proceedings of the Royal Society B: Biological Sciences has highlighted the discovery of the oldest known sample of animal sperm, which dates back to the Cretaceous period. It is also shockingly large.

Researchers believe the fossilized sperm is the work of an ostracod, a crustacean that bares some resemblance to a shrimp with a large shell covering. Interestingly, though, the sample was not found in a preserved male ostracod, nor was it found lodged deep in amber like a prehistoric Fleshlight. Instead, the sperm was discovered in the reproductive tract of a female ostracod that was encased in resin.

While ostracods are not uncommon creatures — in fact, some are still alive today and can be found in oceans, freshwater lakes, and rivers — this particular species was previously unknown. Reserachers named the new discovery the Myanmarcypris hui. It is described as having a similar appearance to a modern day mussel, and is believed to have occupied a region that is near modern day Myanmar.

Prior to the discovery of the shockingly large and ancient ostracod sperm, the oldest known sperm was 50 million years old, the work of a now-extinct worm discovered fossilized in a cocoon in Antarctica.

Ostracods are tiny creatures and typically don't grow much longer than just a few tenths of an inch long. But it's sperm? That stuff gets much bigger. Scientists found as many as 50 sperm cells inside the preserved body. While they were unable to get a full measurement of any one of them, they found that the cells were at least 200 microns long, which is about one-third the length of the creature's entire body.

The trend of producing sperm that is abnormally large continues in ostracod species that are alive today. Researchers found that some can produce sperm that, when unraveled, are 0.46 inches long. That's as much as four times longer than the entire length of the body of the creature it comes out of. That's a lot of sperm!

More like this
"Brood X," a plague-level cicada infestation, is coming for us this spring
By Rafi Schwartz
The U.S. is spending millions to develop a nuke-powered spaceship
By AJ Dellinger
Google Earth's new Timelapse feature is a rude awakening for climate skeptics
By AJ Dellinger
Stay up to date