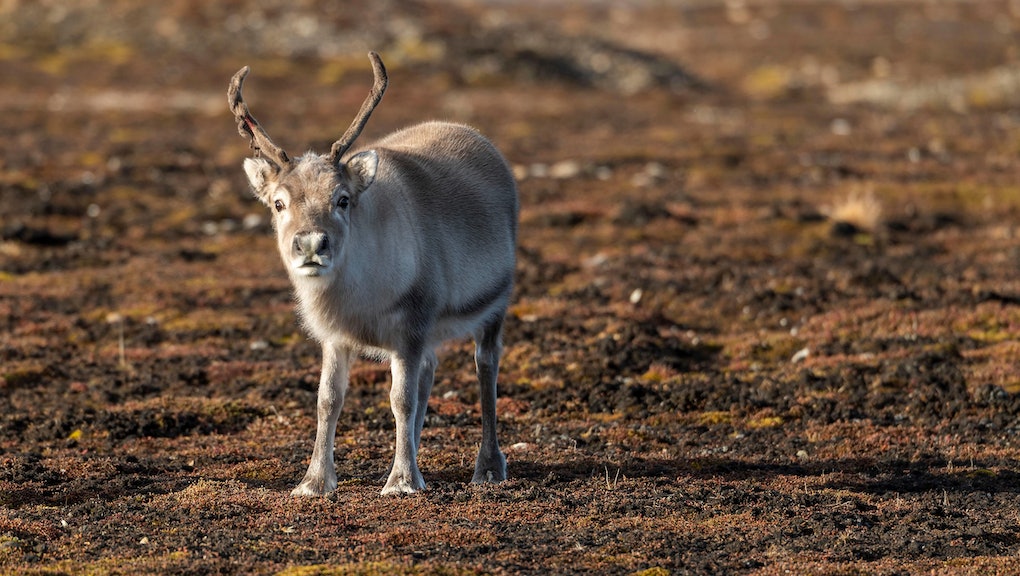 In a stark showing of how cruel nature can be, 200 Svalbard reindeer died of starvation last year in the Arctic archipelago of the same name. The Norwegian Polar Institute, which has been hard at work studying the reindeer across the landscape there for nearly 50 years (since 1978), has confirmed this is the highest death toll for the animals since the 2007-08 season. To blame, according to researchers, is a harrowing example of the effects of climate change.

According to the Norwegian Polar Institute's report, the reindeer (Rangifer tarandus platyrhynchus) met this unfortunate end because there simply wasn't enough food to go around. And for the reindeer that didn't pass away from malnutrition, they were discovered to be underweight, indicating a growing problem that could continue to worsen as the years go by.

The food shortage, according to ecologists, was apparently caused by a thick layer of winter ice that it appears the reindeer weren't able to break through to reach fresh vegetation. This typically isn't an issue for the animals, but with additional rainfall due to the warmer temperatures of late, the typically thin ice has become stronger and thicker, making it nearly impossible for the reindeer to get any meaningful amount of food to eat. More rainfall means more frozen ice patches all over the land, and that spells bad news for the animal life.

Warmer weather in the summer and spring months can pose a problem as well. Hotter temperatures can mean the reindeer experience a longer breeding season, which means when it comes to winter, the deer are competing for food even more so than usual, leading them to take often dangerous measures to get the nutrition they need to survive.

Researchers have also noticed via GPS signals that these effects have caused reindeer to head further out from the bounds of their normal grazing areas, climbing mountains and exploring dangerous terrain in an effort to find food. These efforts, combined with the temperatures, have resulted in the aforementioned mass starvation.

"It is scary to find so many dead animals. This is a terrifying example of how climate change affects nature," said Norwegian Polar Institute ecologist Ønvik Pedersen. "It's just sad." The reason these reindeer are under watch by this particular institute is because of the species' importance to the area's ecosystem.

These reindeer are largely left to flourish typically, and while they have few predators, their remains often feed the Arctic fox. A dearth of reindeer will likely lead to a drastic reduction in the other animal populations in the area, which can in turn affect vegetation and several other factors – when one factor is disrupted, it's echoed elsewhere in an ecosystem.

Right now, it's estimated that Norway's reindeer population is currently sitting around 220,000. As far as the total Svalbard reindeer left alive, the Norwegian Arctic Institute isn't quite sure, but the animal's population has been growing – for example, from 400 to 1,200 between just 1979 and 2013.

This is just one additional sign that the effects of climate change are beginning to manifest, according to scientists. The Arctic alone has been warmer over the past five years than any time in history since the beginning of record-keeping in 1900, according to the National Oceanic and Atmospheric Administration in the United States.

It's an alarming situation to be sure — and an even bigger reason to do our part when it comes to working to slow the damage humanity has continuously done over history to the planet.