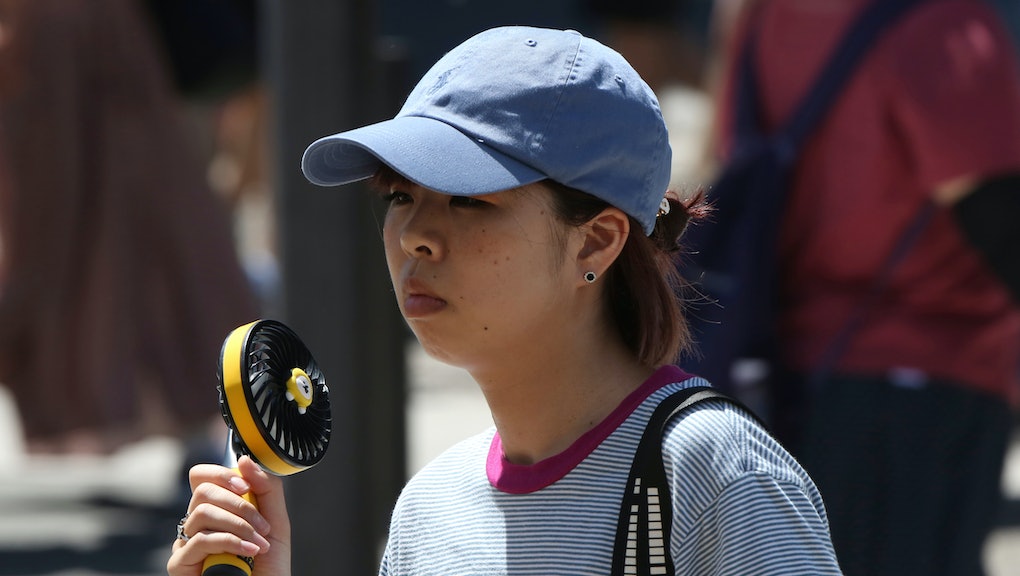 If you've been waiting for the temperatures to drop so you can whip out your fall wardrobe, you might have to keep those burnt orange cardigans tucked away a little longer. According to the Copernicus Climate Change Service, 2019 had the hottest September on record — and that could carry over into October. In fact, it seems that record-breaking temps are part of an overall trend for 2019.

Copernicus found that September 2019 was about 1.02 degrees warmer than the average from 1981-2010. Although Copernicus says this is the warmest September in its records, it's "virtually on a par with 2016." However, September isn't unique because this entire summer has been full of incredibly hot months.

Both June and August ended up breaking records for their months, but it was July whose temperatures were the most brutal. July 2019 ended up being the warmest month ever recorded.

“July has rewritten climate history, with dozens of new temperature records at [the] local, national and global level. This is not science fiction. It is the reality of climate change. It is happening now, and it will worsen in the future without urgent climate action," Petteri Taalas, secretary general of the World Meteorological Organization, said.

Funded by the European Union, Copernicus provides "authoritative information about the past, present and future climate, as well as tools to enable climate change mitigation and adaptation strategies by policy makers and businesses."

While the data collected by Copernicus is important because it helps put climate change into numbers, its impacts are clearly visible across the globe already. You just have to know what to look for. For example, the ongoing fires in the Amazon, which gained global attention when São Paulo, Brazil experienced a blackout, are all linked to climate change.

Recently, a massive iceberg about the size of London separated from the Amery ice shelf in east Antartica. Although ice does naturally break away, it also seems to be in line with Copernicus' data which found that sea ice extent in both polar regions was less widespread than average for 1981-2010.

Reviewing data on global temperates can be frightening, but it should be taken as an important reminder to start talking about climate change and prioritizing sustainability.

More like this
Amid daily reports of catastrophe, Americans are finally starting to realize climate change is bad
By AJ Dellinger
Much of the American West is on fire. Again
By Vanessa Taylor
14,000 scientists warn of "untold suffering" if we fail to act on climate change
By AJ Dellinger
Stay up to date