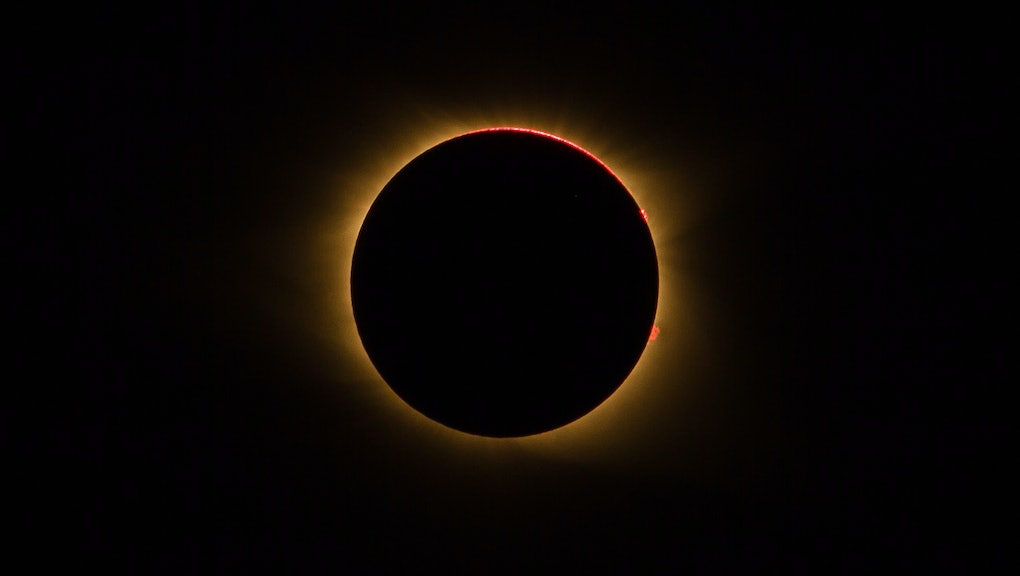 Catching a total solar eclipse is awesome, but not always possible depending on where you live. Sadly, not every eclipse can be as conveniently located for those of us in North America as the 2017 total solar eclipse that was visible across the United States. This year's event will be visible from South America, instead — primarily in Chile and Argentina. But thanks to the power of the internet, you can still check out the total solar eclipse without splurging on a plane ticket.

According to The Verge, the eclipse will start at 12:55 p.m. ET and continue over Chile around 3:22 p.m. ET. After traveling through Argentina, the eclipse will end as the sun sets in Buenos Aires at approximately 4:44 p.m. ET.

The last total solar eclipse was in 2017, when millions of people in the U.S. could witness the event in-person as the sun passed over the nation. A total solar eclipse occurs when the moon moves between the sun and the Earth, aligning perfectly, causing the moon to momentarily block out the light from the sun. For a brief while, the day suddenly turns into night. 2018 contained only partial eclipses, where the moon only covered part of the sun.

For those not in South America, livestreams and other online coverage will begin at 3:00 p.m. ET, as the eclipse becomes visible from land, starting with NASA TV's livestream. There will be three programs available: A silent broadcast, a stream with English commentary, and another stream with Spanish commentary.

The European Southern Observatory (ESO) will begin their live webcast of the eclipse around 3:15 p.m. ET. The broadcast is expected to last almost three hours, depending on weather and internet conditions.

The Exploratorium offers live coverage of the solar eclipse through their website and their Total Solar Eclipse 2019 app for Android and iOS. Broadcasts will be available in English and Spanish starting at 3:20 p.m. ET. For those who want to enjoy the viewing in silence, there will also be a commentary-free viewing as well.

It is popular belief that solar eclipses, whether total or partial, are dangerous to look at without specific solar eclipse eye protection. Although this is mostly true, NASA and other scientists have recently debunked part of this myth. There's a short moment, when the moon has completely covered the sun, where it's safe to look at the eclipse with the naked eye. However, your timing has to be very precise — staring into the eclipse at any other time can still cause eye damage or blindness (so maybe keep the glasses on).

Viewers watching the eclipse from the internet shouldn't have anything to worry about in terms of safety, though.

More like this
For the record, this lake in Patagonia is not supposed to be neon pink
By AJ Dellinger
Amid daily reports of catastrophe, Americans are finally starting to realize climate change is bad
By AJ Dellinger
This is what it looks like when a city floods in real-time
By AJ Dellinger
Stay up to date