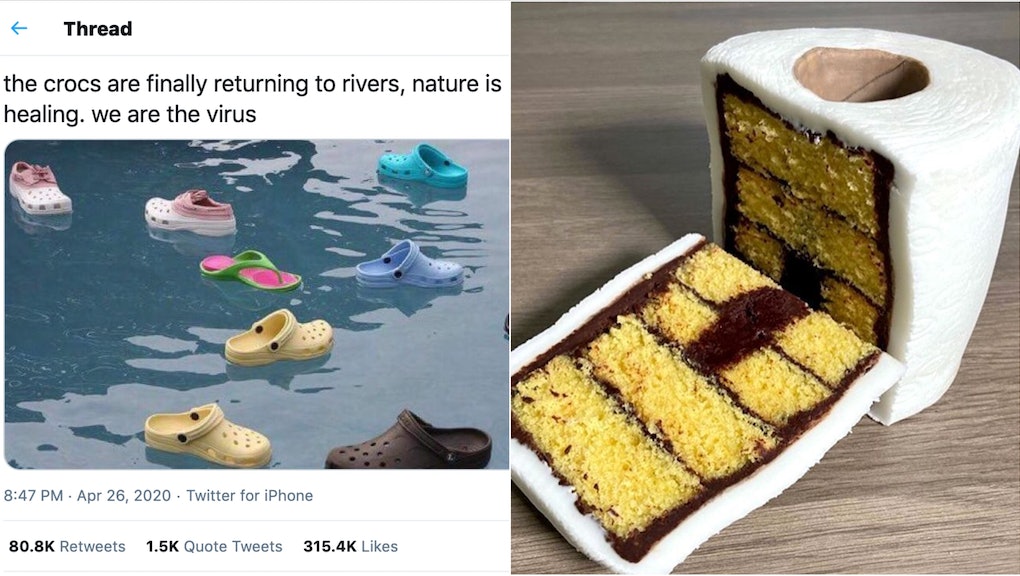 2020's best memes, from "nature is healing" to "everything is cake"

It’s been a long, weird 12 months, hasn't it? Winter normalcy gave way to a pandemic-induced lockdown, which has stretched out interminably into this current season of dry air, frigid temps, and time spent indoors — you know, that wonderful time of year when people tend to get each other sick. Along the way we experienced a summer of uprisings, an election, and divergent understandings of the word coup. We’re still processing the fact that March is only three months away.

Staying home all year, getting our sinuses repeatedly swabbed, enduring the same “bubble” of people, fearing for the health of ourselves and loved ones — this has not been great. Amid so much suffering, stress, and isolation, it might seem odd to think about viral web culture at a time like this. But sometimes, even when the world is coming apart, you can't help but enjoy a silly cake meme.

This year perhaps more than any reaffirmed the internet's status as a magical and cursed space, a bizarro zone where Grimes and Elon Musk can reveal their baby's name as X Æ A-12 to get dunked on and three-year-old photos of Robert Pattinson in a tracksuit can still cause a stir. So without further ado, here’s a roundup of the memes that helped the Mic crew weather this surreal, difficult year.

Back at the start of the pandemic, one glorious silver lining emerged from quarantine: with humans no longer out and about in the world mucking everything up, the Earth began rebounding. Pictures of pristine canals in Venice went viral, spawning the idea that “nature is healing.” Naturally, the concept devolved into memery, with people posting pictures of Lime scooters dumped in a river (as one hysterical example) captioned with “nature is healing, we are the virus.” Humans, man. We never cease to entertain. —Kara Weisenstein, Culture Writer

No single meme captured the surreal absurdity of 2020 quite like the “Everything Is Cake” meme. In a year where our worlds were rapidly unspooling, realizing that a roll of toilet paper was actually a baked good strangely made perfect sense. Watching an endless stream of everyday objects be revealed as cake also echoed a truth we’ve confronted all year — that absolutely nothing is as it seems. In that way, the uncomfortable delight we all felt watching a knife glide into a Croc felt like a perfect metaphor for our distorted reality. —Shanté Cosme, Executive Editor

Maybe it was just the stifling loss and inequality, but didn’t voting feel like nothing more than the bare minimum this year? This didn’t stop the breathless, insistent demands from certain Twitter echo chambers to VOTE whenever some new horror emerged — or the ensuing memes. Second only to jokes about still standing in line to vote, weeks after the polls closed, I could always count on an audible chuckle from combatting some apocalyptic threat — climate catastrophe, the planet being subsumed into a black hole, a pack of killer wolves — with voting. The enormous gulf between the needs of Americans and what our leaders were willing to provide widened even further this year, so it was only healthy to have a laugh. —Shawn Cooke, Culture Writer

As Election Day stretched into Election Week, I was a wreck. On the first night, I wanted an answer, and was convinced staying up till 3 a.m. would yield one. Then I had to wake up at 7 the next morning and really regretted my choices. By Thursday, I believed simultaneously that election workers were underpaid, undervalued heroes, and that the whole thing was taking unbearably, unnecessarily long. That's when I was reintroduced to Brian McKnight.

The "Nevada counting ballots" memes took the maddeningly mundane democratic process and made it certified comedy. From McKnight to Little League show-offs to animated sloths, no slowpokes were safe from the memers' wrath. —Kimberly Alters, Politics Editor

An escalating, absurd shitstorm of a year compressed into four escalating, absurd images. I recommend watching the video (1:00 – 2:00), which follows Korean mukbang YouTuber Tasty Hoon’s journey from food prep to suddenly getting whipped by ropes of thick cheese as his fondue machine disassembles, then disassembles some more. It’s not apparent whether he’s crying or laughing or both afterward. But if you keep watching (and can forgive the overwrought soundtrack), you will see our bowl-cutted protagonist retrieve the fallen cheese, coil it onto his less-than-hot fried chicken, and — I would suggest, not uncourageously — chew. —James Yeh, Culture Editor

Sure grandma, let’s get you to bed

Feel a little washed this year? Like every cultural institution you hold dear might not emerge on the other side of this pandemic in one piece? Whether we’re talking about movie theaters, live music, or the career achievements of Ellen DeGeneres, there was probably a meme for its precarity. The stock photo of a younger woman escorting an elderly woman with a walker was made for an enduring meme format. You didn’t have to apply it to something so existential — any bit of terminally online detritus or Limp Bizkit factoid could do — but it was comforting to remember that we’re all headed for the same obsolete fate. —S.C.

If you... then you don't need to worry about the vaccine

While coronavirus vaccine breakthroughs (big or small) have had most of us cheering from our isolations and quarantines at home, there has been growing skepticism towards the vaccine, thanks to anti-vaxxers fueling baseless misinformation and conspiracy theories. According to meme aggregator site Know Your Meme, the earliest use of the meme came from Twitter user @myeshachou, who tweeted, "if your social security number is saved in your notes app, you do not need to worry about the vaccine putting a chip in you." In true Twitter fashion, the Tweet spread like wildfire and turned into a hilarious call-out meme that had everyone saying, “I feel attacked.” After reading some of them, I can confidently say that I do not need to worry about what’s in the vaccine. —Alisha Sahay, Social Editor

Not even to dinner with the Kushners?

Project Runway contestant Tyler Neasloney was one of the best things to come out of the show reboot, and it’s not because of his design skills. Neasloney delivered some meme-worthy shade to judge Karlie Kloss that sent the interwebs wild and had me audibly screaming at my computer screen. When judge Brandon Maxwell said he couldn’t see Kloss wearing Neasloney’s design for the challenge, the audacious young designer responded, "Not even to dinner with the Kushners?" It was a top-level quip that was so satisfying it left the judges speechless. —Erica Euse, Culture Writer

More like this
Facebook is making emojis you can hear
By Chloe Stillwell
What 'Super Mario 64' selling for $1.56 million says about nerd culture in 2021
By Keith Nelson Jr.
Phoebe Bridgers and John Mulaney announced tour dates and the internet imploded
By Chloe Stillwell
Stay up to date