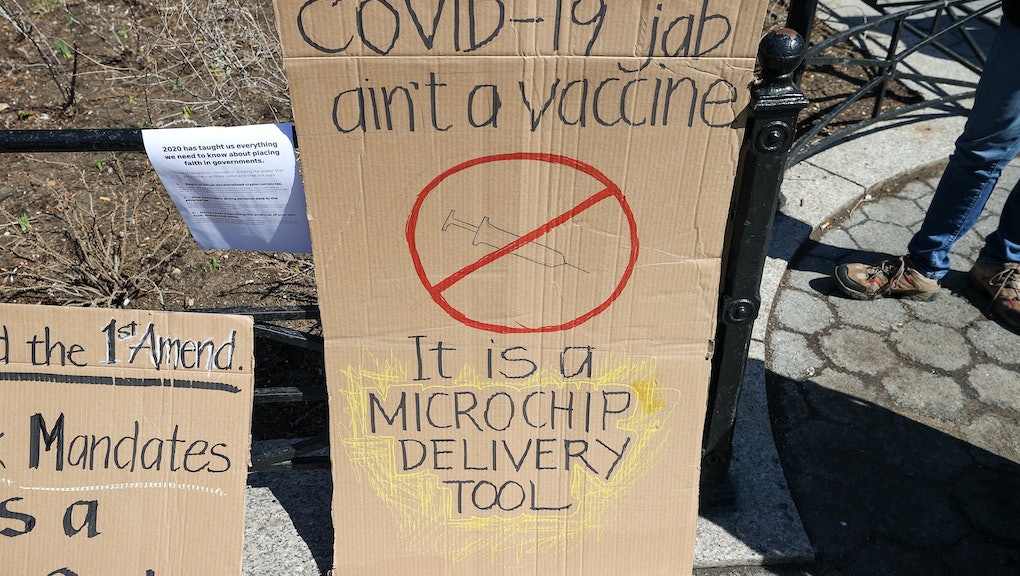 Earlier this month, we awoke to a sobering New York Times headline about how the U.S. probably won’t reach herd immunity, that long-awaited milestone when enough of us would be immune to the virus that we could return to normal, or something like it. But even if herd immunity might be elusive, the story pointed out, vaccinating as many people as fast as we can remains crucial to bringing down the number of cases and tightening the reins on the pandemic. A major obstacle stands in the way, though: vaccine hesitancy. And fueling this hesitancy is a maelstrom of conspiracy theories that have swirled through social media.

The anti-vaxx movement and Facebook have a mutualistic relationship, as USA Today reported, in which both profit from spreading these falsehoods. The outlet found that anti-vaxx entrepreneurs peddle supplements like colloidal silver and other shady vaccine “alternatives” through paid Facebook ads. In short, the anti-vaxx movement is lucrative — something to keep in mind the next time you encounter one of its so-called “theories.”

Familiarizing yourself with these theories, as baseless as they are, can help you come up with talking points the next time someone tries to float them past you (if you even want to get into it with them), or at least prevent you from falling for them yourself. Here’s a breakdown of three truly wild COVID-19 vaccine conspiracy theories and the science debunking them.

You can "shed" COVID-19 vaccines onto other people

According to this conspiracy theory, vaccinated people can shed the vaccine onto unvaccinated people, Vice explained, causing irregular periods and even miscarriages and infertility in the latter. The theory gained so much traction that a private school in Miami told teachers that if they chose to get the jab, they could no longer be in physical proximity to students.

You might remember the term “shed” from the beginning of the pandemic, in reference to people spreading coronavirus particles, Reuters said. But the medical experts the news organization reached out to said that shedding of the vaccine is not a thing. And although scientists need to conduct further research to determine whether the vaccine can affect menstruation in people who’ve gotten it, an NIH spokesperson told Reuters that there’s no evidence “that vaccination of one person can have negative health effects on others.”

The COVID-19 vaccine implants microchips into people’s bodies, so this theory goes, designed to surveil their every move, ABC4 said. James Tabery, an associate professor of philosophy at the University of Utah who writes about such conspiracy theories, traced the microchip theory to a misunderstanding of the Bill and Melinda Gates Foundation’s efforts to track vaccination information in developing countries that lack an electronic health record infrastructure, according to the network.

MIT researchers investigated whether marking a person’s skin with invisible dye — which a light or smartphone app could reveal — might help doctors determine whether they’d been vaccinated, but Tabery told ABC4 that the concept didn’t make it to human trials. “You sort of mash those two things together and sprinkle some paranoia and you get Bill Gates wants to microchip everyone,” he said.

Basically, there is no COVID-19 vaccine microchip tracking technology, Thomas Hope, a professor of cell and developmental biology at Northwestern University Feinberg School of Medicine, told the Chicago Tribune. Besides, he noted, you already have a tracking device: your phone. Social media collects and sells your data all the time.

COVID-19 vaccines will edit your DNA

This conspiracy theory seems to stem from a variety of sources. Reuters cited a lengthy post circulating through social media, which posed the question, “All of those considering taking… this vaccine... You recognize that this permanently and irreversibly changes your DNA?” Meanwhile the BBC described a video by osteopath Carrie Madej, in which she claimed that "the Covid-19 vaccines are designed to make us into genetically modified organisms."

According to the CDC, both the mRNA and viral vector vaccines authorized for use in the U.S. give our cells instructions in the form of genetic material, essentially “teaching” our immune systems to protect us against the virus. But the agency pointed out that this genetic material doesn’t get into the nucleus, the part of the cell that encases our DNA. So, no, these vaccines don’t modify your DNA — and in fact, they don’t interact with it, period.

This article was originally published on May 12, 2021

More like this
A Hot Vax Summer is impossible when my family in India is still struggling
By Angel Kumari
This anti-vaxx doctor is seriously telling lawmakers vaccinated people are "magnetized"
By Tracey Anne Duncan
Why the origin of coronavirus is still a mystery
By Marilyn J. Roossinck
Stay up to date