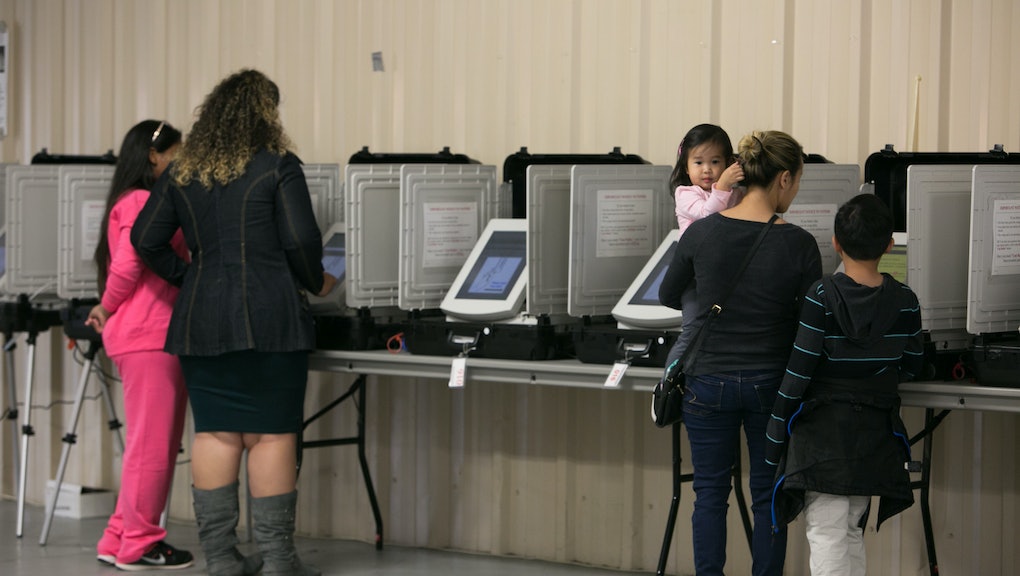 Next Tuesday, as millions of voters head to the polls to cast ballots in what's been billed as the most consequential election of our lifetime, voters in California and Colorado will be considering a number of different voting rights propositions that could have ripple effects for generations. Here are a few that you should know about:

In 2016, Hillary Clinton lost the presidential election even though she received 3 million more individual votes than Donald Trump. The reason for this is the Electoral College, the voting system outlined in the Constitution that determines who the president is.

Last year, the Colorado state legislature voted to join National Popular Vote Interstate Compact, a commitment signed so far by 15 states and the District of Columbia that says in the event of a repeat of the 2016 election, electors could vote according to the popular vote. The idea is that the people's voice should directly be able to determine who the president is, rather than a group of a few hundred electors.

According to the Compact's website, the bill "ensures that every vote, in every state, will matter in every presidential election. The Compact is a state-based approach that preserves the Electoral College, state control of elections, and the power of the states to control how the president is elected." It's not a constitutional amendment, but a formal agreement between states to honor the will of the people while maintaining the electoral system.

When enough states whose electoral votes amount to 270, the law will go into effect. As Paul Sracic explained for CNN in 2011 after California approved the Compact: "Assume that in the next election President Barack Obama receives more votes in California than whoever wins the Republican nomination. If NPV is in effect, Obama would not necessarily be awarded California's 55 electoral votes. If the Republican candidate captured more of the popular vote nationwide, then he or she would be given those 55 electoral votes, regardless of the vote in California."

If Colorado voters vote yes on Proposition 113, nothing would happen immediately given that there still aren't enough states signed onto the Compact. But the Centennial State would become the 16th state to sign on to the pact, bringing its nine electoral votes with it.

California's Proposition 17 would extend the right to vote to Californians on parole. Currently, those who return home from the state's jails and prisons are prohibited from casting a ballot while they're being monitored by the state.

Proponents of the proposition say that action to rectify the mass disenfranchisement of people who have been incarcerated is much needed. A report from the University of California, Berkeley School of Law found that between 1980 and 2010, the number of people on parole increased by 708%. While the average parole time is three years, some people are sentenced to parole for life — which would mean they'd lose their right to vote for life, even though they're no longer incarcerated.

California law also states that only registered voters can run for office, so Proposition 17 would open the door for individuals who were formerly incarcerated to hold elected positions. The proposition also mirrors a larger nationwide reckoning with the criminal justice system, in that many states are re-evaluating the efficacy of incarceration, the root causes of crime, and whether or not access to the polls should be predicated on one's history of conviction.

The bill has wide support among California's political organizations and politicians, including Gov. Gavin Newsom (D).

This California proposition would extend voting rights to 17-year-olds who would turn 18 by the general election. If Proposition 18 is passed, 17-year-olds across the state would be able to cast ballots in primary, general, and special elections, as well as run for office, as long as they'll be 18 by that year's Election Day.

If Proposition 18 passes, California would join 19 states and Washington, D.C., in extending voting rights to 17-year-olds. Lowering the voting age could have a number of ripple effects — from shifting the results of local elections that often are decided by a handful of votes to encouraging life-long electoral participation. As Fair Vote, a non-profit voting access organization states, voting is a habit; the earlier in life one starts voting, the more likely they'll continue with their participation.

More like this
Live from New York: Revisiting the totally bonkers era of post-9/11 'SNL'
By Rafi Schwartz
After 9/11, the U.S. leaned into security theater. Here's how that's playing out 20 years later
By Vanessa Taylor
This poll shows just how strong Trump's hold on Republican voters is
By AJ Dellinger
Stay up to date