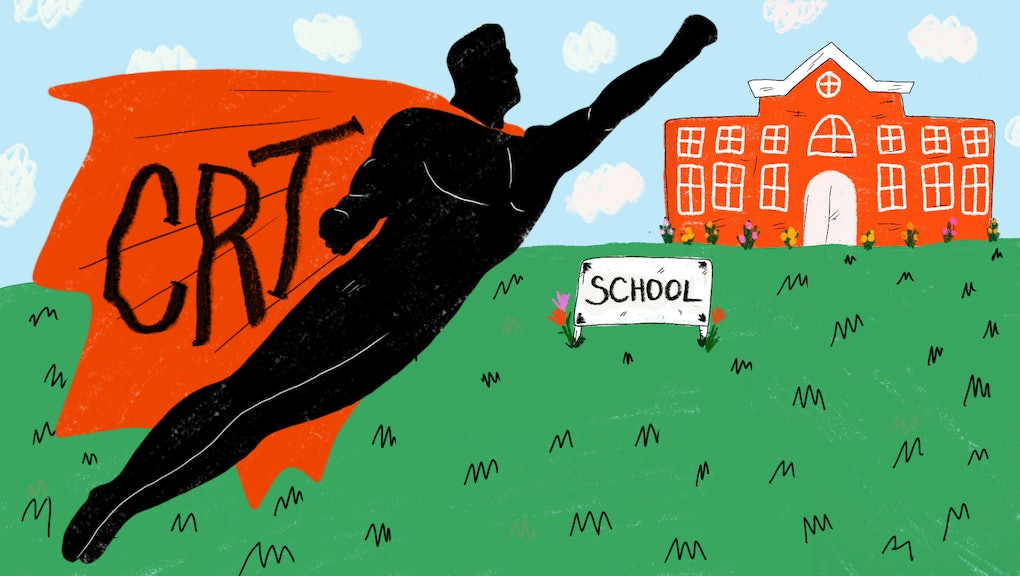 Critical race theory has been making headlines as the latest bogeyman for white conservatives’ racial anxiety and resentment, transforming typically sedate school board meetings into reality TV-worthy showdowns for parents hell-bent on shielding their kids from portrayals of America as anything less than exceptional. Twelve states have banned teaching CRT or limited educators' discussions of racism and sexism as of August 12, according to Education Week.

Even those of us who haven’t stepped foot in a classroom in a while have gotten swept up in the debate — including the progressive-minded among us who wished we’d learned about our country's racist origins and its ripple effects sooner, before the “onward and upward” narrative had taken hold.

The problem is, sometimes it feels like we can do little more than roll our eyes or vent to each other, maybe post an Instagram infographic or two. How can you support CRT if you’re not a teacher or student? According to race scholars, there are still actionable steps you can take, even if you’re outside the educational system.

Because of the misconceptions swirling around CRT, let’s first be very clear about what it is, and isn’t. Simply put, CRT is an intellectual movement focused on how systemic racism has shaped our legal history, says Alvin B. Tillery, Jr., an associate professor of American politics at Northwestern University who researches CRT. Legal scholars like Kimberlé Crenshaw, Derrick Bell, and Richard Delgado helped lay down the groundwork beginning in the 1970s.

Tillery says they make a set of arguments he thinks most people would agree with: Race is socially constructed — typically through the law and government institutions — not biologically based. As a result, racism is a permanent feature of American society that we need to deal with as it surfaces — it won't "evaporate into thin air" as our attitudes toward communities of color change, Tillery explains. Finally, we can make big gains in fighting racism only if white people see it as in their interest to do so, as well.

Although CRT has been around for a few decades, Keffrelyn D. Brown, a professor of cultural studies in education at the University of Texas at Austin, believes it only entered the limelight recently because “there was an intense interest” among many in the U.S. to understand race, racism, and their role in our society, at least since the protests in the wake of George Floyd’s murder last summer.

According to Tillery, the debate over CRT is part of a longstanding pattern. “The kind of angry white men that control the Republican party have decided to turn it into the latest racialized threat” to stoke anger among their base, he says, akin to the Central American “migrant caravan” in 2018.

Much of the rage toward CRT is based on a misunderstanding of it, both genuine and willful. Contrary to what opponents claim, it doesn’t teach students that white people are inherently racist, Tillery says. In fact, CRT isn’t even a subject educators are trying to teach, Brown explains, but a framework that can be used to understand how racism operates in different contexts, whether in schooling practices or everyday interactions.

What’s more, CRT is taught primarily in law school, Tillery says. By and large, K-12 educators don’t seem to be teaching it, NBC News reported. What they are teaching in many parts of the country is the truth: “that for most of our 200 and plus years, America was a racialized dictatorship,” Tillery explains. “That is frankly freaking out the same voters and politicians whose interests are fundamentally bound up with white supremacy.” They’re just using “CRT” as a catchall for any discussions related to race.

Indeed, what really seems to be at issue is schools discussing racism, period. “The desire is for schools to not help young people read and recognize and make sense of racism as both a historic and contemporary feature of our society,” Brown tells Mic.

Brown and Tillery offer their insight into how to support CRT, even if you’re not working or studying in the schools that have become ground zero of the debate, so that students can learn the truth of the racial injustice built into this country — and be better poised to fight it.

Deepen your understanding of racism

This can help you recognize when a criticism of CRT is valid, or rooted in racial anxiety. “There are people and communities that sometimes are afraid of diversity,” Brown says. “They’re afraid of their children becoming sensitive and perhaps even advocates for diversity and racial justice.” Likewise, many opponents of CRT point to it as being a widespread problem when in reality, efforts to teach students about race and racism “always has historically been marginalized."

But Brown notes that navigating these dynamics can be tough if you don’t have a complex understanding of racism that goes beyond how people treat each other. “It’s much easier to not recognize how it may play out in political and coded ways,” she says.

You could make your way through the plethora of anti-racist reading lists that flooded the Internet last summer, if you haven’t already. Look for books that tackle the contradictions between efforts to create a space for freedom and liberty, and the enslavement of Black people and genocide of Indigenous people, Brown says. She also strongly encourages reading American history through the lenses of communities of color, which traditional history textbooks typically leave out.

Make a strong case for CRT

For all their misrepresentation and maligning of CRT, you’ve got to hand it to the right: They “have real talking points,” Tillery tells Mic. Sure, these points are based on disinformation, he says, but the right is largely unified in its dissemination of them, thanks to conservative groups and political action committees. Partly because progressives consist of various disparate groups, we don’t have the same coherent messaging strategy. “There is nobody disseminating the talking points on the left,” Tillery notes.

But to really challenge vehement CRT opponents, you need to think like an attorney and have "really well-developed case material," ready to go, Tillery says. The first step to drawing up these talking points is to learn the substance of CRT by reading work by its founders. Read Derrick Bell’s Faces at the Bottom of the Well: The Permanence of Racism, Tillery suggests, or Jean Stefancic and Richard Delgado’s Critical Race Theory: The Cutting Edge.

Then, establish rebuttals to common arguments against CRT, sort of like the ones we throw down in the face of climate change denial. Cite evidence from your reading. When someone says climate change isn’t real, Tillery notes, we might point out that July 2021 was the hottest month on record, or that huge glaciers are melting in the Arctic. In the same vein, if someone says they don’t believe systemic racism exists, he says you could respond that from 1896, when Plessy v. Ferguson deemed racial segregation laws constitutional, to the passage of the Civil Rights Act in 1964, America had a racial caste system that denied service and opportunities in the labor market to people of color.

“These kinds of examples really disarm the nonsense,” Tillery explains. “If everyone on the left is just committed to ‘social good, social good, systemic racism is wrong,’ but you don’t have the talking points to really back down the counterarguments, then it leads to paralysis.”

Call racism what it is

Much of Bell’s writings on CRT are based on the writings of the founding fathers themselves about how they built racism into their fledgling country, Tillery says. He points out that if you read these primary sources — which you can Google — it becomes painfully obvious that the U.S. has been systemically racist for most of its history. So “don’t accept the terms of the debate that the right wing establishes,” he says. In other words, if you argue that America is steeped in systemic racism, and people clutch their pearls at you for daring to make such an assertion, “don’t run away from that.”

Tillery thinks the older politicians in power are following the dated playbook that encourages them to pander to the "great white male swing voter," which could explain why they tend to soften their comments about America’s racist history. But that scary swing voter “doesn’t exist anymore.” The U.S. Census Bureau predicted that slightly less than half of kids would be white by 2020. You have the leverage, so call it like you see it.

Know the limits of social media

As great as social media can be for sharing information, sometimes even in transformative ways, Brown says, it doesn’t change the fact that some people misunderstand CRT, or have zero interest in understanding it and just don’t want to discuss race at all. Since social media platforms don’t really allow people to unpack ideas in a nuanced way, miscommunication is common on them, she says. The anonymity they afford also makes it easy for people not to truly engage with the material, and/or act like antagonistic jerks.

Plus, Tillery points out that it’s hard to compete with misinformation bots when it comes to spreading the word. “I think it would be better if people actually held teach-ins, actually been to some of these public school meetings,” where you can absorb the arguments and contribute talking points, he says.

Even if you’re not fully invested in preserving CRT, Tillery believes it’s incumbent on all of us to ensure that America gets a full account of its racial history. “It’s not just something that’s just kind of an esoteric debate ... It’s about everybody,” he says, whether or not they’re in the classroom. The attack on CRT "is just another strike in our democracy, and we’ve got to be very, very cautious in this stage of our nation’s history about what we’re willing to accept.”

More like this
Brain scans revealed how racism weighs on Black women's health
By Sierra Carter
An anti-vaxxer decided to come to work in blackface, comparing her "plight" to that of Rosa Parks
By Melissa Pandika
How to end a text conversation without being rude
By Tracey Anne Duncan
Stay up to date