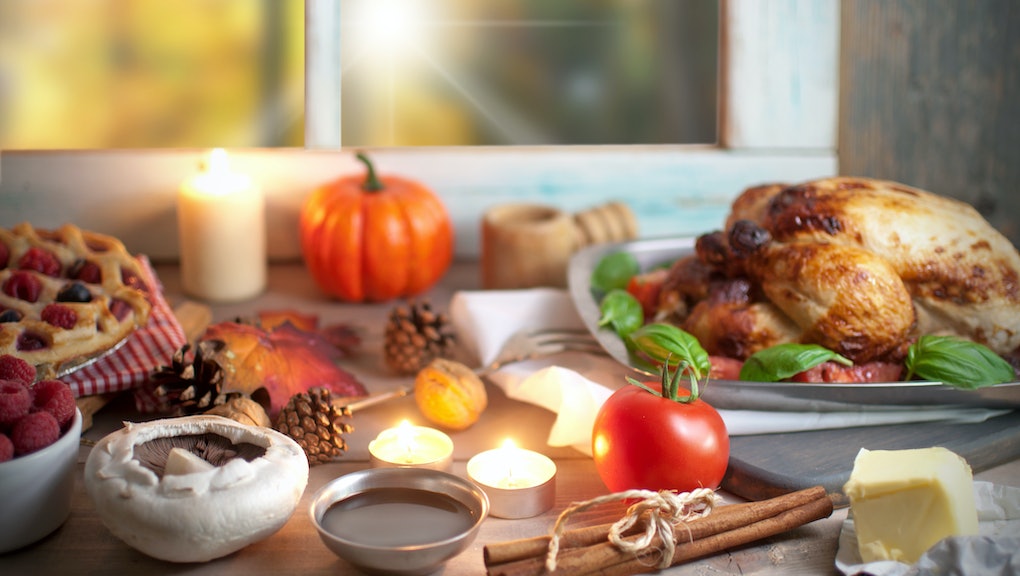 It's that time of year again. The holiday season is nearly upon us, and that means gifts, merriment, and unfortunately a massive amount of holiday food waste. According to Harvard's Food Law and Policy Clinic and the Natural Resources Defense Council, Americans throw away around $165 billion in food every year. Worldwide, the number stretched to 1.3 billion tons of waste annually. This isn't limited to food waste solely around the holidays, but making heaps of food for your Thanksgiving get-togethers or Christmas dinners and promptly throwing away what's left certainly isn't helping matters.

It's not just an inconvenience, either. According to the U.N., food waste is actually responsible for over 7% of the world's greenhouse gas emissions. In a way, reducing waste could also help save the planet. This year, pledge to make a difference by following these simple steps to reduce your holiday food waste. They require little action on your part, but following them can ensure you make a massive difference when it comes to reducing worldwide waste. If these tips work for you, be sure to pass them on as well.

When prepping holiday feasts, instead of heading to the grocery to pick out the most pristine ingredients possible, this year consider using "ugly" fruits and veggies as a base for many of the dishes you'll be creating. Many pumpkins aren't especially "pretty," for instance, but they make absolutely delicious pies. The same can be said for potatoes, carrots, and other root vegetables. By the time they've been prepped and added to dinner, no one will know what they looked like in the first place. Chances are, no one will care, either.

There's actually a subscription box service called Misfits Markets that focuses on this aspect of cooking, headed by CEO Abhi Ramesh. The company sources organic produce that stores or farms can't sell due to aesthetic imperfections, boxes them up, and sends them straight to consumers. Otherwise, perfectly good food could end up in the garbage. This way, you get the ingredients you need, all the while reducing waste created by the way grocery stores operate and their need for "perfect" produce.

"Our goal always has been to reduce inefficiency and reduce waste," Ramesh told Mic via phone. "One of the reasons why there's so much waste in the current food system is because of the way physical grocery stores operate. They have to actually stock shelves with hundreds and thousands and some cases, tens of thousands different of different varieties of fruits and vegetables, packaged goods, dairy, et cetera. It's tough to say 'Hey, here's how much we're going to need' and stock the shelves. Then there's a complex supply chain that creates several touch points throughout the process. I think that actually creates a tremendous amount of waste," he explained.

Using a service like Misfits Market (or even shopping for discount produce at your favorite grocer) helps reduce the amount of food thrown out. Just because a potato is adjoined with another, or a carrot looks like the state of Utah, that doesn't mean you can't eat it. And if it's going into a pot pie or other dish anyway, who would know?

Cook only what you need for your holiday meals

Instead of going all out for the holidays, reel it in a bit and only cook what you need. For instance, if you know you're only inviting five people, cook only the amount of servings that befit five guests. This way you don't have an overflowing table with food that isn't being eaten, and everything is accounted for.

"My family and I have started to do this during the holidays, Misfits Market's Ramesh told Mic. "Instead of saying 'Hey, we're going to go in and cook everything on the planet, bake 10 pies, and cook all this stuff, we're actually going to be a little more diligent about planning how many people are coming over." This can be trickier if you throw parties when you don't know who's coming, so worst case scenario is you plan for a certain amount of individuals you invite, and go from there.

"I think what people generally find is that if you don't plan, you generate food waste in the process. If you actually plan, write down a list, and measure portion sizes more accurately, that's a big way to cut down on holiday waste."

To help measure portion sizes, think about picking up pre-measured containers that are clearly marked to help you figure out exactly the amount of ingredients you need. You may also consider using recipe box services like HelloFresh for ideas that are already pre-portioned to the number of people in the parties you're serving.

What do you do if you happen to have food left anyway? Just keep repurposing it until there's nothing left to throw away – at least, not feasibly. Take leftover turkey and chop it up for a delicious turkey salad or casserole. Use leftover green beans for a new, delicious side dish. What's more, you could potentially incorporate some foods that you'd like to use from the freezer or refrigerator in these new "recycled" recipes, even if you think they're going or have gone bad.

"What you see 90% of the time is that the best by or sell by date is actually not reflective of the quality of the product. Most people will see something with a best by date of November 15 and be like 'Oh, I can't use it,' and they'll toss it, which is false," said Ramesh. "The reality is that with many foods, even after the best by date, that actually means nothing with regard to the quality of the products."

So go ahead, toss some leftover stuffing into a pie crust, pour some broth over it, and make a pot pie with odds and ends. Your stomach will thank you.

When the holiday parties have ended and you're still inadvertently left with food, even after planning for the correct amount of people, there are still options. You don't have to throw anything away. This may come as a no-brainer, but your friends and family are a great way to get rid of unwanted food, even after you've used all the leftovers you possibly could.

"There's something you can do with every single piece of food that you buy and cook over the holidays. Even if it's not you and your family consuming every single piece, there are still food pantries and places to donate," said Ramesh.

Box up plate lunches and donate them to shelters. See if any of your family members need some extra food to tide them over through the holiday rush — especially friends or kin with children who just don't have the energy to cook the next few days after a party when school is out. All of these actions are well within the spirit of the most giving season of all — and you can remain secure in the knowledge that you're making a difference when it comes to reducing waste.

More like this
Eco-friendly houseplants: Here's how to ensure your indoor plants are good for the planet
By AJ Dellinger
Somehow the Swiss Alps are still growing, shocking scientists
By Tebany Yune
Uber offered its drivers help with health care, but of course it was a mistake
By AJ Dellinger
Stay up to date