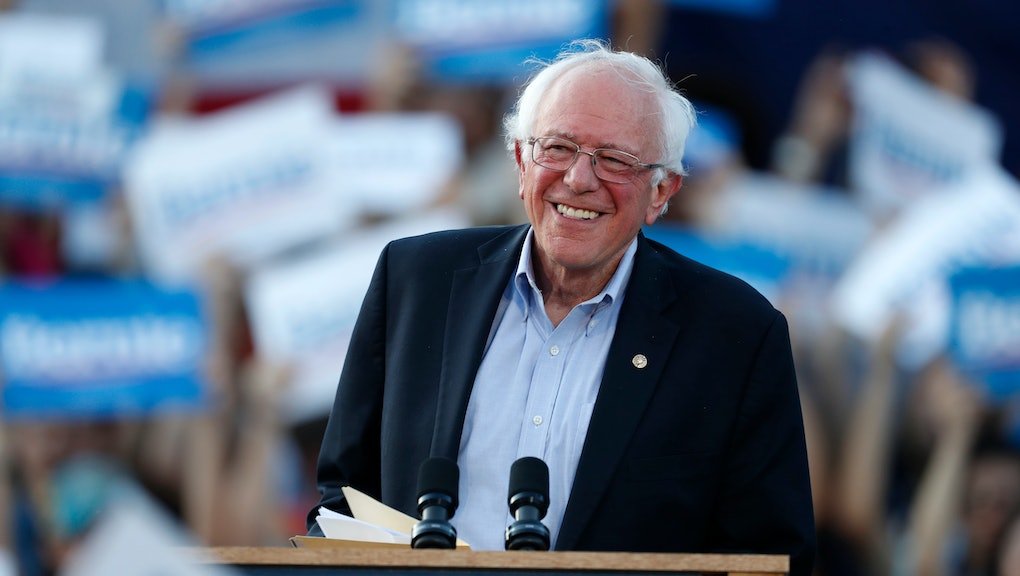 This Thursday, 10 of the candidates vying for the Democratic presidential nomination will descend upon Houston for the third Democratic debate. The festivities in Texas will pit Sens. Bernie Sanders (Vt.) and Elizabeth Warren (Mass.) against each other once again, after the two first faced off during the second debate in July. They’ll be joined by current frontrunner Joe Biden, the former vice president, allowing voters to see the three leading candidates of the race on stage together for the first time this primary season.

Sanders arguably single-handedly changed the trajectory of the Democratic Party in 2016, when his insurgent candidacy against Hillary Clinton thrust a host of unabashedly progressive ideas into the mainstream. The most prominent: Medicare-for-All. The revolutionary health care proposal calls for every single American to be covered by government-provided health insurance. It would shutter employer-provided health plans and roll Medicare and Medicaid into one universal health system, leaving only the Veterans Affairs system and Indian Health Services intact as alternate health care providers.

The government would offer an “especially robust” set of health benefits, Vox writes, including “hospital visits, primary care, medical devices, lab services, maternity care, and prescription drugs as well as vision and dental benefits.” Americans would also not be expected to pay out-of-pocket for any medical services, aside from prescription medication, and the plan would “cover all U.S. residents,” Sanders told The Washington Post, including undocumented immigrants.

But Sanders offers little in the way of detailed explanation of how the government would fund such comprehensive health coverage, aside from a tax on the very rich. Other skeptics, including Biden, suggest it would take too long to implement a single-payer plan, and an alternate proposal that reduces the number of uninsured overall is better, even if it doesn’t cover every single American.

Still, after emerging as a fringe idea with Sanders’ first run for president, the idea of single-payer health care in the U.S. has now been embraced in some capacity by many of his competitors this go-round. Here’s what’s on deck if Bernie Sanders wins the presidency, aside from Medicare-for-All.

1. A $15 minimum wage and boost to labor unions

While Democrats have been calling for minimum wage hikes for years, Sanders’ proposal to set the standard at $15 per hour was a dramatic increase over previous proposals. In January, he introduced a bill in the Senate to raise the federal minimum wage to $15 from $7.25, which he called a “starvation wage”; a measure promising a $15 per hour minimum wage by 2025 passed the House over the summer.

Sanders has coupled his wage hike push with a promise to empower unions. He’d end right-to-work laws, which the AFL-CIO says can make it harder for employees to organize and do collective bargaining, and enshrine the right to strike into law for federal workers. He’d also pursue legislation to protect the “card check” method of unionizing, which makes organizing easier for workers by bypassing the National Labor Relations Board’s election process. The goal, per his campaign, is to double membership in labor unions over the course of his first four-year term.

Sanders’ policies have inspired workers across the country to strike for a $15 minimum wage — although he found himself on the wrong end of a labor dispute earlier this year, when The Washington Post found that his campaign was paying field organizers less than the $15 per hour minimum he touts. His presidential campaign staff, which unionized in May, demanded a wage hike, citing the candidate’s own rhetoric about workers’ rights. The dispute was settled in July when Sanders announced that his campaign would pay an annual salary that was akin to slightly higher than a $15-per-hour wage.

2. A plan to cancel student debt for every single borrower

When Warren, Sanders’ close friend and possibly closer ideological rival, outlined a detailed plan to cancel student debt for nearly 95 percent of borrowers in April, it was the first defining moment of her candidacy. But Sanders’ plan actually goes even further than Warren’s by promising to cancel out all $1.6 trillion of student debt in America, meaning that balances for every single borrower would go to zero.

The Vermont senator plans to do that by offering a debt forgiveness plan sans eligibility requirements, freeing up to 45 million Americans from their student loan burden. He plans to pay for that relief with a tax on all financial transactions, which his campaign claims could raise $2 trillion in revenue over 10 years. Sanders also notes that the burden of student debt is disproportionately shouldered by women and minorities, and writes on his website that “our country is morally bound to close the racial wealth divide. In order to do that we are going to cancel all student debt.”

Along with debt forgiveness, Sanders has proposed tuition-free education at community colleges and four-year public institutions through the College for All Act, which would put $48 billion annually toward providing that resources to people regardless of income. While Sanders and his ideological kin argue that these proposals will boost the economy by freeing up spending power and redistribute wealth more equitably, others say that his policies are financially impossible and would send the deficit skyrocketing.

As Vox puts it: “By the end of the last presidential primary, the country was well aware that Sanders’ average campaign donation was $27.” The senator has made his total reliance on a vast network of small-dollar donors a signal of his ideological purity — his willingness to eschew possibly large and helpful influxes of cash from the wealthy in order to stay true to his populist message.

To that end, he has pledged to overturn the Supreme Court’s 2010 Citizens United decision, which ruled in 2010 that corporate political spending was protected as free speech under the First Amendment. His refusal of corporate PAC money has trickled down to his competitors, although some critics argue that Sanders’ “financial purity test” is actually putting Democratic candidates at a disadvantage when it comes time to win a general election against President Trump.

Sanders has also called for elections to be publicly funded and for Election Day to be made a national holiday so that it is easier for Americans at all levels of employment to be able to vote. He would also restore the Voting Rights Act, as well as reinstate voting rights for all felons who have served their sentences — “Every single American citizen must be able to vote. Period,” he tweeted in April — and has co-sponsored legislation to automatically register Americans to vote when they turn 18.

Sanders dropped his take on the Green New Deal last month, calling for a whopping $16.3 trillion to be spent tackling the climate crisis by 2035. His campaign notes that investment on this scale is “in line with the mobilization of resources made during the New Deal and World War II,” but that his team would make the “explicit choice to include black, indigenous, and other minority communities who were systematically excluded in the past.”

The details, per The Verge, are as follows: declare climate change a national emergency; achieve a carbon-neutral economy in the U.S. by 2050, including 100 percent renewable energy use in the transportation and power sectors by 2030; invest heavily in sustainable energy sources like solar, wind, and geothermal power; rejoin the Paris climate accords; put $200 billion toward helping developing nations limit their emissions, a crucial piece of staving off the worst effects of climate change on the global level; and establish a $40 billion “Climate Justice Resiliency Fund” to specifically help underserved communities adapt to the effects of climate change.

Sanders is known for his economic populism, but his foreign policy approach to the 2020 race has been quietly game-changing. After relegating foreign affairs mostly to the sidelines during his 2016 campaign, the senator has taken pains to address his agenda abroad from early on in his campaign — and not only that, but he’s shown a “willingness to cross red lines that have long defined the boundaries of acceptable opinion,” The Atlantic writes.

Among his priorities? Withdraw American troops from Afghanistan, Iraq, and Syria, ideally through Congress “[reasserting] its constitutional authority over the use of force.” The senator would also end U.S. support of Saudi Arabia’s intervention in Yemen, in line with a proposal he shepherded through the Senate last year, and he’d attempt to restart dialogue with Iran as well as rejoin the Iran nuclear deal.

But “most controversially of all,” The Atlantic notes, Sanders has “suggested cutting U.S. military aid to Israel.” The country has been generally untouchable for Republicans and Democrats alike — even when the relationship is sometimes fraught — but Sanders has gone so far as to label the Gaza Strip an “open-air prison.” In breaking with other longstanding tradition, Sanders has also invoked America’s history of problematic intervention in Latin America, and has signaled a willingness to work with China and Russia. Overall, Sanders has espoused a vision of foreign policy that relies on “partnership, rather than dominance.”