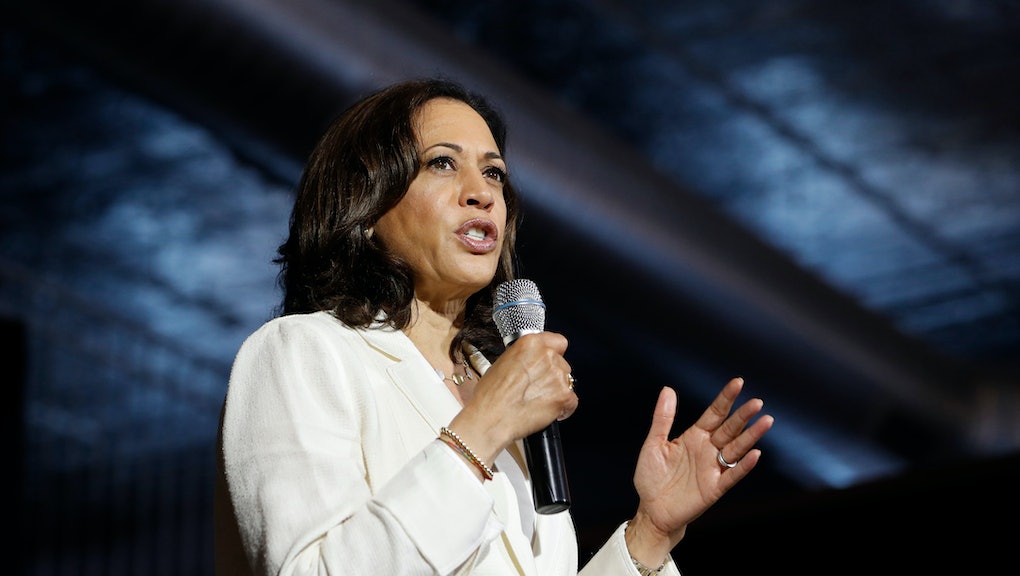 This Thursday, 10 of the candidates vying for the Democratic presidential nomination will descend upon Houston for the third Democratic debate. The festivities in Texas will mark the first time that all the leading candidates — former Vice President Joe Biden, along with Sens. Elizabeth Warren (Mass.) and Bernie Sanders (Vt.) — will share the same stage. While that means there may be a fight for oxygen at the very top, it also opens the door for candidates floating in the middle, who may be pulling noteworthy support but not cracking double digits, to land some solid blows on any of the top candidates if they so choose.

Enter California Sen. Kamala Harris. The former prosecutor has consistently polled just outside the upper echelon, and after launching a news-making attack on Biden at the first debate in June, she’s been mired in a slow summer. Her legacy on criminal justice as a California official has been the most persistent theme of her campaign, and while her legal instincts have been relegated to grillings on the Senate floor in recent years, Harris has made her criminal justice reform plan a pillar of her candidacy.

Her sweeping approach to the legal system includes a mix of legislation, executive action, incentivizing change through increased funding, and pressuring state and local governments to act. The top goal of the plan is to end mass incarceration, which Harris wants to do in part by ending the “war on drugs” and legalizing marijuana on the federal level. She wants to enact comprehensive sentencing reform, including ending mandatory minimums and private prison use and reforming the clemency process. The Mercury News adds that Harris would also do away with cash bail and capital punishment for federal crimes and put more resources into preparing inmates for release; she’d additionally restore voting rights for people who served their sentences.

The senator has “already discussed most of the proposals in the plan before,” The Mercury News notes. “But consolidating them into one progressive laundry list is a rejoinder to critics on the left.” Here’s what else is on deck if Kamala Harris wins the presidency, aside from an overhaul of America’s criminal justice system.

1. A new tax credit for the middle-class

Harris is generally seen as a more moderate candidate, but her LIFT Act proposal to benefit America’s middle-class is “a big expansion of the safety net,” Vox says. The gist is to essentially hand cash back to the middle-class and working poor every month, to the tune of up to $3000 annually for a single person making less than $50,000 per year, and double that for a household earning less than $100,000. The money — up to $250 monthly for singles and $500 for households — would be made available to lower-income Americans in addition to the existing benefits and tax credits they can already access. It could also be accessed in a lump sum as a tax credit at the end of the year.

The plan is a “fun-house-mirror inversion of the sweeping Republican tax initiative,” The Atlantic explains. Harris’ campaign projects that up to 80 million Americans could benefit from the proposal, a number The Atlantic notes could include lifting nearly 3 million children out of poverty.

Per Vox, the price tag for the endeavor would hit about $200 billion in year one, and balloon to $2 trillion over ten years — “roughly in the range of the price tag for the 2017 tax cuts” passed by Republicans. Still, The New York Times points out that Harris’ plan is an “incremental” one that might not appease the party’s staunchest progressives, while Politifact notes that the plan “would not benefit Americans without incomes, in an effort to reward those who work.”

Harris has sought to mold herself as a champion for minorities, a progressive with practical sensibilities. Perhaps the defining policy proposal of this ethos has been her creative idea to use interlocking executive actions to protect young immigrants, rather than hope that Congress gets on board with comprehensive immigration reform in the early days of a Harris administration.

Per the Los Angeles Times, the executive orders would: cement DREAMers as lawful immigrants and establish a “parole-in-place” program to allow them to live in the U.S.; remove certain barriers to green card access; issue a legal statement that DREAMers were “not at fault” for breaking immigration laws, making it easier for them to attain citizenship; and retroactively grant them work permissions through the Department of Homeland Security, thus removing any penalties they may have faced for working illegally.

Taken together, Harris’ campaign predicts that those orders would clear a path to citizenship for 2 million DREAMers, per the Los Angeles Times. Harris has also said she would reinstate the Deferred Action for Childhood Arrivals program, an Obama-era policy that protected DREAMers from deportation, and loosen the rules around the program to extend eligibility to more undocumented young immigrants.

Harris has indicated she would enter the White House with her pen at the ready, outlining a series of changes she’d pursue via executive action. Beyond immigration reform, she’s also proposed addressing America’s lax gun laws this way if legislation stalls, saying at a CNN town hall that she would give Congress the first 100 days after her election to “get their act together and have the courage to pass reasonable gun safety laws.”

Otherwise, her planned executive orders would: make illegal the importation of assault weapons; mandate “near-universal background checks” by requiring gun sellers with more than five transactions annually to perform a background check for all sales, thus closing the loophole of unlicensed dealers; deny any person with an outstanding warrant for their arrest the ability to purchase a firearm; expand the law prohibiting the sale of a weapon to a married partner convicted of domestic abuse to also deny dating partners convicted of the same crime; and push the Bureau of Alcohol, Tobacco, and Firearms to revoke the licenses of any weapons sellers found to have broken the law, fining such corporations for each violation and holding them criminally liable when necessary.

As part of her gun safety agenda, Harris has also released a detailed strategy for addressing domestic terrorism and violence committed at the hands of white nationalists, which includes a proposed red-flag law.

4. A trauma-based approach to reparations

How Harris identifies has been a point of interest throughout her campaign, as she represents many possible firsts for the White House: first woman, first Black woman, first Indian American, first Asian American. Some have leveled the criticism that Harris is not Black “enough,” a charge she flatly denies. (Harris’ father is a Jamaican immigrant, and her mother is an Indian immigrant.)

It’s under this lens that the candidate is questioned about her stance on reparations. Harris joined a bill proposed by her presidential rival, New Jersey Sen. Cory Booker, as a co-sponsor this year, signing onto his proposal to establish a commission to study the legacy of slavery on African Americans. The commission would then go on to make recommendations on possible reparations policies, though the bill itself does not put forth any specific reparations policies.

Harris has been evasive on the issue beyond her support for Booker’s bill. When questioned directly on her stance on reparations by The Grio, she instead pivoted to her LIFT Act proposal as one that would benefit Black Americans by doling out tax credits to people with household incomes below a certain threshold. When pressed by the interviewer that only “by default,” rather than specific intention, would the LIFT Act benefit Black families, Harris argued that the proposal is one designed to “focus on the specific issues that have resulted in the greatest disparities, and … that’s part of why we’re doing it.” She added that she would not propose a policy that only benefited Black people, because “any policy that will benefit Black people will benefit all of society.”

In a March interview with NPR, though, Harris sketched an approach to reparations that went beyond merely tepid support of exploring the issue. Describing slavery as an ongoing source of trauma for generations of African Americans, Harris said that when left unchecked, such trauma can lead to “physiological outcomes.” That prompted NPR host Steve Inskeep to ask outright whether “reparations could be mental health treatment for African Americans,” then. Harris zoomed out a bit in her answer, stating that the word “reparations … means different things to different people,” but what she’d advocate for is “[studying] the effects of generations of discrimination and institutional racism” to “determine what can be done, in terms of intervention, to correct course.”

5. Equal pay for men and women by law

In an effort to close the gender wage gap, Harris has proposed imposing hefty fines on employers who are found to pay men and women differently. The plan would rewrite discrimination law to mandate that companies receive federal certification that they are paying women fairly, and that any discrepancies in compensation can be attributed to “merit, performance, or seniority,” the Los Angeles Times explains. Companies found to be violating this law would be penalized proportionally, at 1% of their profits for every 1% gap in pay between men and women that can’t be attributed to the above factors.

The law would also require companies to disclose their compensation information to the Equal Employment Opportunity Commission, and thus “aims to shift the burden from workers, who now must prove pay discrimination by employers, to corporations, which would have to show they eliminated pay disparities,” Reuters points out. Harris has also indicated that she would be willing to implement the policy by executive order if Congress does not do so.

The Harris campaign has said overhauling the discrimination law could generate $180 billion over 10 years, with the fines collected going toward funding for universal paid family leave. But while Harris noted that the wage gaps for women of color are even more severe than for women broadly, the plan does not specifically seek to proportionally address those race-based earning inequalities.

More like this
Trump wanted to quarantine Americans at Gitmo last spring, according to a new book
By Rafi Schwartz
SCOTUS just dealt a unanimous blow to the NCAA over student-athlete compensation
By Rafi Schwartz
57% of Republican voters believe Trump only lost because of fraud, per a new poll
By Rafi Schwartz
Stay up to date