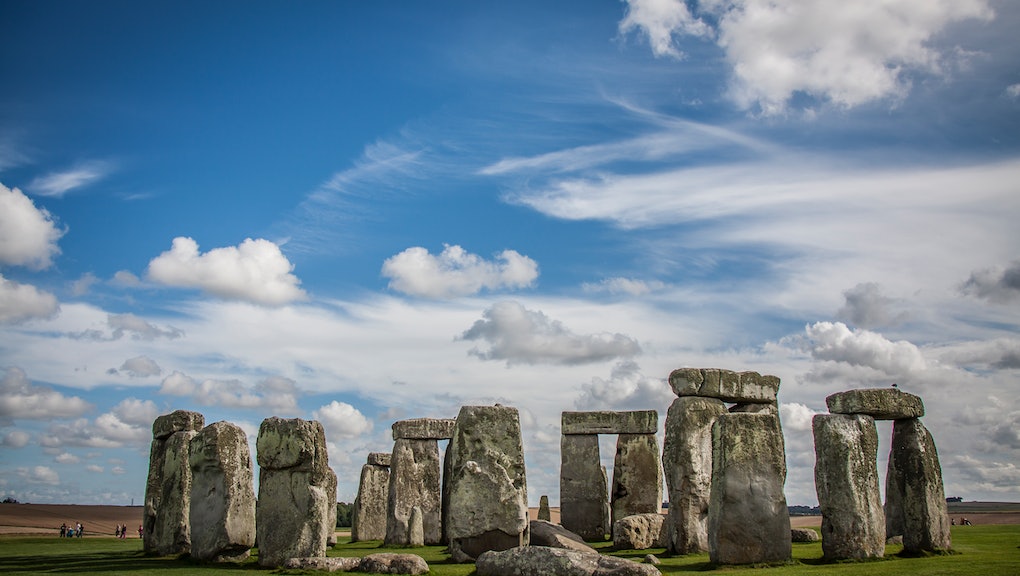 5,000 years later, we finally know where the stones in Stonehenge came from

Archaeologists have finally discovered where the largest standing stones in Stonehenge come from, and it's all thanks to a restoration worker who kept a drilled-out portion of one of the slabs for over 60 years. As he was turning 90 last year, he decided to return the souvenir. Scientists seized the opportunity to run analyses on the sample and figure out its origin. Nearly a year later, the researchers have announced that the stones in the 5000-year-old structure came from the West Woods in Wiltshire, about 15 miles away from Stonehenge.

Their findings were published on July 29 in the journal Science Advances and add to previous Stonehenge studies that have sourced the smaller stones from locations as far away as Wales.

These enormous slabs of sandstone, called "sarsen" stones, make up the majority of the standing and fallen ring of Stonehenge. Researchers have been prevented from sampling the rocks due to strong preservation laws in Britain.

In 1958, restorative work was underway to lift a few of the fallen stones into the positions they would've been in during Stonehenge's heyday. To do this, workers had to reinforce one of the slabs with metal rods, requiring the construction crew to drill and extract three parts of the core to make way for the rods.

One of the three-foot long chunks was preserved by an employee, who returned it last year.

Researchers took the core and performed a detailed, non-destructive chemical analysis to understand its origins. They already knew which stone it came from, but needed to know the geochemical signals that could identify what elements were in it. The unique combination of elements could then be matched to other stones within Stonehenge and around Britain. Like DNA testing for rocks, in a way.

Using the geochemical signals, the scientists found that most of the sarsen rocks in Stonehenge matched with rocks from the same place—the West Woods in Wiltshire. It was an unexpected finding for the research team; only two of the sarsen stones seem to come from a different location.

"The biggest surprise for me was finding out that the chemistry of the remaining sarsens was so consistent," team lead Dr. David Nash told The New York Times. "I expected a little more variability."

Perhaps the reason the researchers expected more variability was because of a previous finding that sourced the "bluestones," the relatively smaller stones dispersed within Stonehenge's ring, all the way from Wales. This discovery blew minds as researchers considered how the Neolithic people of the late Stone Age—whose most advanced tools were made of rock, bone, and wood—moved these giant slabs to create such a monument.

The proximity of the source of the sarsens, a 40-minute drive, suggests that the builders, very understandably, decided to pick the largest stones of the monument from a location that was significantly closer than the bluestones.

"We can now say, when sourcing the sarsens, the over-riding objective was size—they wanted the biggest, most substantial stones they could find and it made sense to get them from as nearby as possible," English Heritage historian Susan Greaney said in a statement. "This is in stark contrast to the source of the bluestones, where something quite different—a sacred connection to these mountains perhaps—was at play."

More like this
The ocean is about to swallow a climate research facility, which feels fitting
By AJ Dellinger
Leaked calls reveal the conservative "master plan" to tank climate action
By AJ Dellinger
"Brood X," a plague-level cicada infestation, is coming for us this spring
By Rafi Schwartz
Stay up to date