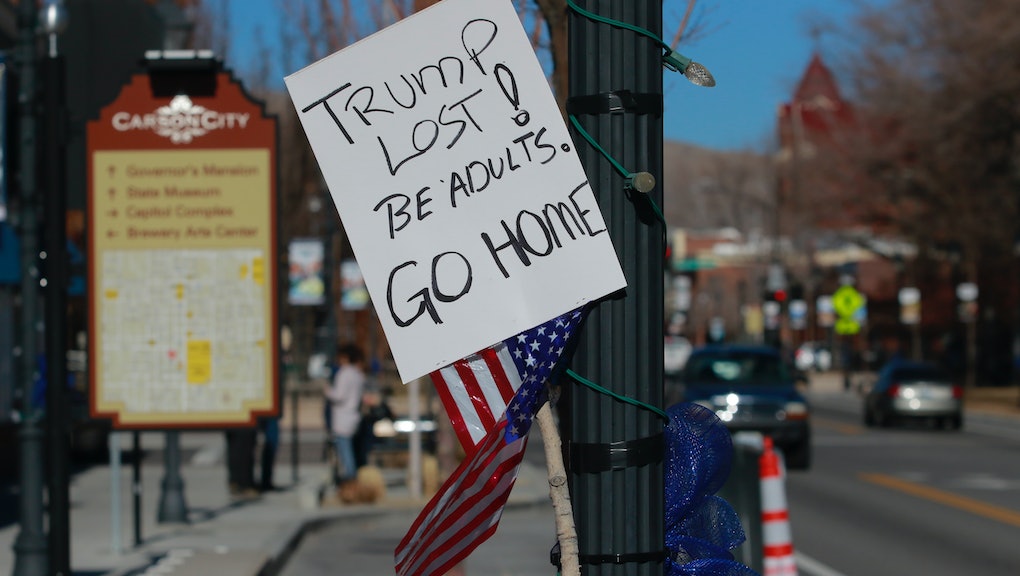 57% of Republican voters believe Trump only lost because of fraud, per a new poll

It says nothing good about our country that 1 in every 3 people apparently believe Joe Biden only defeated Donald Trump in the 2020 election through outright fraud. It is similarly unfortunate that the more than 30% of the country who do believe that has largely stayed unmoved by "facts" and "reality" for the past few months, according to a just-released poll from Monmouth University.

"The continuing efforts to question the validity of last year's election is deepening the partisan divide in ways that could have long-term consequences for our democracy, even if most Americans don't quite see it that way yet," Monmouth University Polling Institute Director Patrick Murray explained in a statement accompanying the poll, published Monday morning. Indeed, a full 57% of Republican respondents affirmed that they believed Biden "only won [the 2020 election] due to voter fraud."

Crucially, as Monmouth notes in their poll top-sheet, "14% of the American public say they will never accept Biden as president, including 3 in 10 (29%) Republicans and Republican leaners."

Disheartening as that all may be, the subtle differentiation between "Republicans" and "Republican leaners" hints at a perhaps more crucial political trend — that of disenfranchised conservatives leaving the GOP, while staunchly maintaining their hard right-wing inclinations.

"At first glance in the crosstabs, it looks like the number of 'Republicans' who believe this has been trending down while the number of independents who agree has ticked up," Monmouth explained in its analysis of the recent poll, conducted between June 9 and June 14 from among 810 adults in the U.S. "However, this appears to be a product of a shift in how Republicans identify themselves, with some moving their self-affiliation from being partisan to being an 'independent' who leans partisan."

By combining the self-identified Republicans with those newly "independent" conservatives, Monmouth's data is surprisingly stable from month to month, with two-thirds of right-leaning respondents continually citing "fraud" as the reason for Biden's defeat of Trump in 2020. However, the swing from partisan-affiliated voters to self-described "independents" who share largely the same set of beliefs suggests long-term problems for the GOP as an institution at risk for bleeding membership — and therefore, funds — even while its electoral reach remains largely unchanged.

Ultimately, if past is prologue, future polling will likely show more of the same sort of electoral denial that has become a mainstay of our fractured political reality.