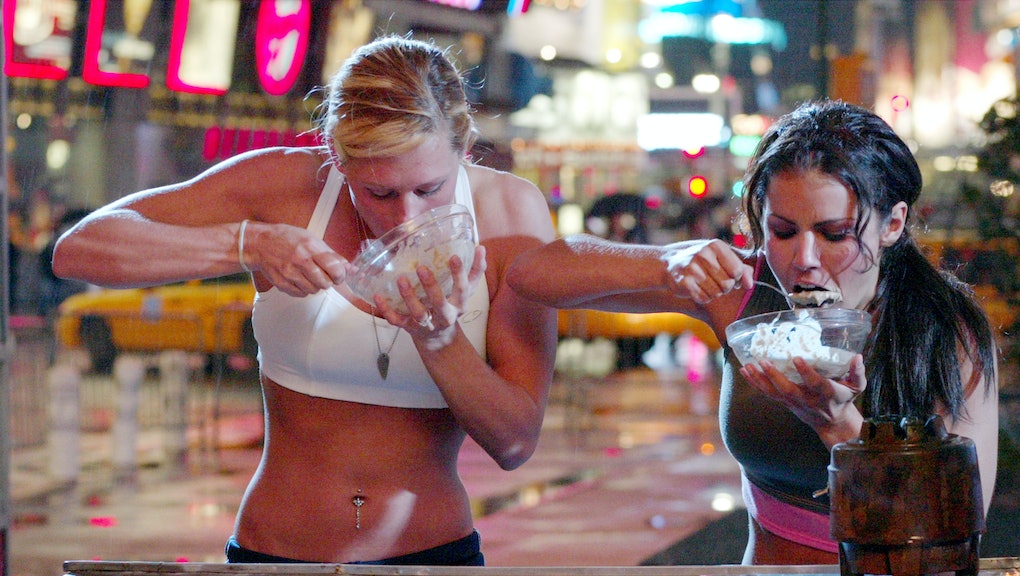 The breadth of Netflix’s offerings is beginning to look a lot more like cable on the surface — low stakes cooking shows, random movies getting a chance to shine, and so, so much of everything. However some of these most popular shows feel strange and bad in a way that could make you long for some of what scandalized cable audiences in decades past. Love Is Blind, The Circle, and now Too Hot to Handle — the latest reality hit, which focuses on a house full of hot people who can’t kiss or do anything more than that — have to some extent subverted common reality tropes with dizzying twists in format, but ultimately land on the same kind of retrograde ideas.

Everyone involved seems to realize these shows are in a sort of arms race to create the most absurd premise and viral interest, displacing old watercooler moments with characters making even worse and more consequential decisions than ever before. You’ll maybe want to take a shower or go on a long walk after something like Love Is Blind, but reality TV has always been predicated on some degree of shame-watching. Luckily, there are some comparatively quaint reality shows available to watch on streaming, spanning the turn of the century right up to the present day.

If it wasn’t the first reality show, Survivor certainly was the vanguard for every American competition that followed. It’s amassed a startling 39 seasons up to this point, with 34 of those available to watch on Hulu right now. This is the kind of reality contest that doesn’t have any other precedent or skillset — you don’t train for Survivor in the same way that you might for American Idol or American Ninja Warrior. Although future contestants would get a stronger foothold on how to best certain challenges, Mark Burnett and the team would tinker with the formula enough to keep it coming, and bring back old favorites to take on each other, their spouses, or newcomers.

Before Joe Rogan became better known for smoking up Alex Jones and Elon Musk, he presided over the most outrageous reality competition on TV. Hardly for the weak stomach or faint of heart, every moment on Fear Factor deserved a Static X song playing in the background, whether it’s a car flipping down a runway, or contestants swallowing blended rats and horse rectum. Some of the most enjoyable, stomach-churning trash currently available on streaming, and casts whatever gross quarantine meal you’ve made into sharp focus.

The most wholesome reality show I’ve encountered, Terrace House, dials down the conflict, dials up the pleasantries, and is the only show with live commentary that works this well. The panel of this Japanese reality show, comprised of actors and comedians, add necessary levity and animation to an episode where the splashiest moment might be someone asking permission to go on a date the following week. While Terrace House gets by on the quotidian hangout vibe, it’s surprising how seamlessly contestants are allowed to just go about their lives while filming. And since it’s a rotating door of cast members, you quickly get the sense of who’s a right fit for the house, or who genuinely needs to move on after being holed up there for several months at a time. It’s the only series I’ve seen where male contestants weep geysers when their friends leave the show.

Stretching the limits of reality programming a bit here (hey, I’d argue that any unscripted series with no actors should qualify,) we come to the most easygoing slice of quarantine TV. I’ve watched at least double digit episodes of Triple G since this started, not only longing for the chance to return to a grocery store without holding my breath, but for the incredibly fun, shambolic structure of these games. Although Guy’s mischievous streak is maybe overplayed to raise the stakes, this show still often features chefs making high-end meals out of I don’t know, canned shrimp, monkey bread, or foods that start with “Z.” It’s also the rare series where special charity episodes offer a heightened urgency, since the judges tend to go easier on amateur chefs.

One of the best shouty hate-watches in the game, House Hunters is another that toes the line of what might be considered a reality show. A House Hunters couple does not practice rational decision-making, or reads far further into the placement of a staircase relative to the door than I have ever considered. It was always this way, but now that millions of Americans face immeasurable financial strain, I suddenly love to hate people whose deal-breakers are if a house isn’t a colonial, doesn’t have a hot tub, or is like 3 miles too far from their start-up’s office.

No matter the gimmicks or structural quirks employed by Netflix, they’ll never tap into the intoxicating mayhem of Vanderpump Rules. Something like Too Hot to Handle will inevitably come up short in stripping away the alchemy that makes something like Lisa Vanderpump’s restaurant empire work. A show that created guilty-pleasure stars in their own right, it’s the kind of overt shamelessness that’s hard to look away from. Like with any other family or workplace dynamic reality series, it’s the one I just can’t imagine what it will look like in a year or so.

More like this
The 8 best reality shows you're not watching, but should be
By Brandon Yu
Live from New York: Revisiting the totally bonkers era of post-9/11 'SNL'
By Rafi Schwartz
Steve from 'Blue's Clues' gave us the closure we didn't know we needed
By Kara Weisenstein
Stay up to date