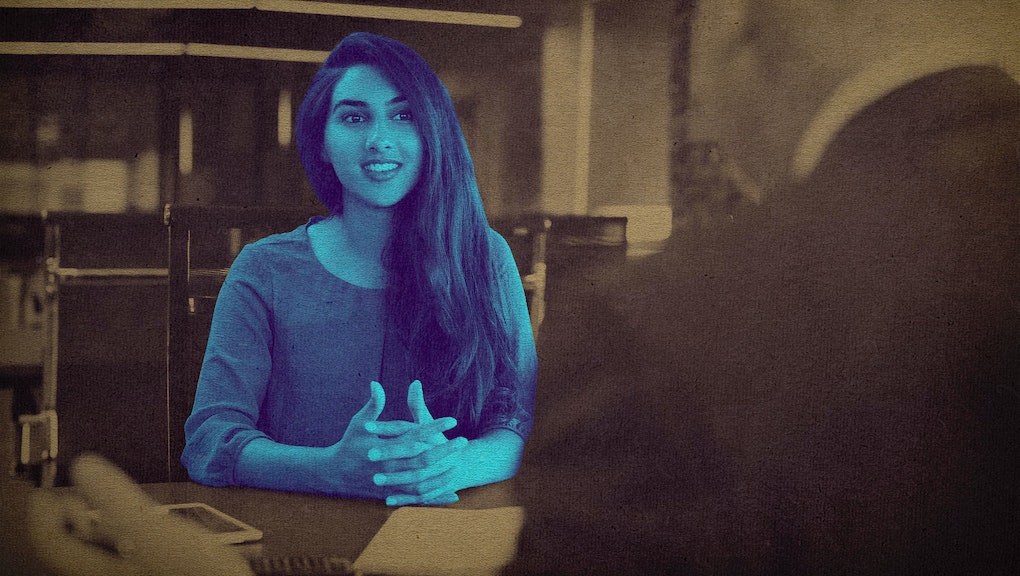 9 job interview mistakes that could legitimately cost you the position

Even the most seasoned candidates are bound to make a few job interview mistakes. And while certain faux pas might not be a deal breaker, others might end up costing you the job.

"There are several reasons a candidate isn't selected for a job, and what happens during the interview can definitely make or break their chances," Debora Roland, vice president of human resources at HR technology company CareerArc, tells Mic. But no pressure, right?

If only. Being afraid of messing up in front of a recruiter or hiring manager is startlingly common; according to a Job Interview Anxiety study from Everest College, 92 percent of applicants fear at least one aspect of the job interview process, from not being qualified enough to getting stumped on a question.

But the better prepared you are, the better you'll be, so before going into your next session, don't just practice your handshake — take note of these common mistakes made during job interviews so you can avoid making them yourself.

1. Having a resume and interview that don't match up

During the interview, the recruiter might ask you a question they already know the answer to in order to see what you'll say, such as, "What were your responsibilities at your last job?" or "When did you leave?" If your response doesn’t align with the information provided in your resume, cover letter, or LinkedIn profile, it might raise red flags, as it implies that you’re hiding something or being dishonest about your work experience or timeline.

Of course, sometimes there's a valid reason for the discrepancy (like if you were saving sensitive information for an in-person conversation), but even so, having two different answers rarely looks good. “Whatever the case, it makes things harder and less straightforward than with a candidate whose experience lines up in both places,” Roland explains.

2. Not notifying them that you’ll be late

When it comes to job interviews, the saying goes, “if you’re on time, you’re late.” While that’s hyperbole, it’s certainly best practice to get to an interview a few minutes early so you can account for delays, settle in, and make a good first impression with anyone you meet before hand.

If you're actually running late, though, don't roll in unannounced. Give the interviewer a heads up on your estimated time of arrival, as it'll not only show that you respect their schedule, but it'll allow them to move appointments around instead of wasting time waiting for you.

“I don’t believe that traffic or a bad luck commute should disqualify a good candidate, but it makes a big difference to reach out to a recruiter right when you realize there will be a delay to let them know,” Jamie Kezner, senior manager of student programs recruiting at Amazon, tells Mic. “Avoid disrupting the schedules of those interviewing you and it will be appreciated.”

It’s important to advocate for your worth in the workplace, but equally as important to know when to bring up the topic. Asking about salary too early in an interview “can send the message that you care more about compensation than you do about the role or company being a good fit,” says Kezner.

There’s no concrete formula as to when it’s appropriate to ask about money, but a good rule of thumb is to follow the interviewer’s lead. If they mention salary early on, great — just make sure that you already have a range in mind so you don't freeze on the spot (if you're not sure how much to ask for, check Glassdoor, which provides salary ranges for specific positions, levels of expertise, and locations).

If the interviewer doesn't bring money up at all, that's also OK, as they might just be saving the conversation once you're further in the process. “A hiring manager often can’t tell you details about the salary, and if there’s opportunity to flex the offer, that’s the job of the recruiter” later on, explains Kezner.

No matter what, don't panic or try to squeeze in questions about money in the last minute of the interview. And the same rule goes for asking about benefits like health insurance or 401k plans. “Some candidates seem over-eager, asking about benefits right from the first conversation,” says Roland. “It's definitely an important factor in the decision-making process, but figuring out whether the candidate, role, and company are the right match takes priority.”

A job interview is a two-way street; you’re getting a feel for the company as much as they're getting a feel for you. That means not just asking the interviewer some questions, but making sure that what you ask is smart, thorough, and telling of your interest in the position. Basic inquiries about things you could have learned from the company's site will make it seem like you haven’t done any research or aren't passionate about the job, says Roland.

Instead, ask thoughtful questions tailored to the specific position and business like, "How will my success be measured in this role?" or "What kinds of challenges is the company currently facing?" Bonus points for asking a question that references a certain deal, acquisition, or department that only a serious and enthusiastic candidate would know.

It's understandable if you're on edge during an interview, but avoid displaying nervous behaviors like tapping your feet or twirling your hair. “I once had a candidate who ended every response with excessive giggling. While not in any way offensive, behavior like this can be distracting,” explains Roland. “Practice interviewing with a coach or even another business professional before you make the rounds. It can be hugely helpful in identifying any distracting or off-putting behaviors you may not even realize you're doing."

If you know that you'll be exhibiting symptoms of anxiety or any other type of mental health issue, talk to a therapist about how to potentially keep those behaviors at bay for a short-term period.

If you seem like you don't even want to be in the interview, why would someone want to hire you? In addition to smiling and sounding enthused, that means staying off technology — seriously. According to a study from staffing service The Creative Group, the very worst thing you could do in a job interview is check your phone. Seventy-seven percent of executives in hiring roles said any candidate caught doing this would be immediately disqualified.

Other similar shows of boredom or unprofessionalism include dressing too casually, checking the time, or chewing gum. Basically, if you come across like you're not taking the interview seriously or have better things to do, it won't look good.

It doesn't matter if you've emailed your resume, cover letter, or recommendation letters over in advance — always take print copies with you to the interview, as the person might want to review your information while you talk.

"Even if an interviewer has already read it, you never know when they reviewed or how the day has been leading up to the interview," explains Kezner. "Having copies ensures your information is top of mind."

A job interview is no place to neither display your political affiliations, nor gauge those of your interviewer. That might seem obvious, but surprisingly, people do it all the time. “We've had candidates bring up politicians and political ideologies in rather strong terms during interviews [which was] completely out of context and not at all relevant or appropriate to the discussion,” says Roland.

Unless you want to send the message that you’re more concerned about pushing your own ideologies than proving yourself for the job, don't talk politics. And that goes for all sensitive matters; steer clear of making any pointed comments about race, religion, or gender. If your interviewer happens to make an offensive comment about your identity or that of others, politely steer the conversation away. Condemn their behavior (either in person or later to HR) only if you think it's worth risking the job over — which it might be, if the interviewer has discriminatory views.

Look, no one likes the “What’s your biggest weakness?” question in a job interview, but it's asked for a reason. Hiring managers want candidates who can talk comfortably about their shortcomings, says Kezner. And while it may feel counterintuitive to relay your flaws to your prospective employer, it demonstrates self-awareness and humility, crucial attributes in any field. So instead of saying you're a “workaholic” or “too meticulous”, which are basically a cheesy way to disguise strengths, describe actual issues you face (having trouble with punctuality, accepting criticism). Then tell the interviewer how you're working to improve them (setting stricter deadlines, developing a thicker skin as your experience grows).

“Candidates sometimes get hyper-focused on presenting a perfect story [like] a resume with only the best examples of their work or answers to questions that showcase they're excellent at their job,” Kezner explains. “If a candidate isn’t humble, or can’t share times that they have failed or misstepped ... it’s a sign that they might not be a good cultural fit.”

If you take care to avoid these major interview deal breakers, you'll likely gain a major edge over your competitors vying for the same role. Still, if you do slip up in some way during the interview, remember that you don't need to be the perfect candidate to score the job.