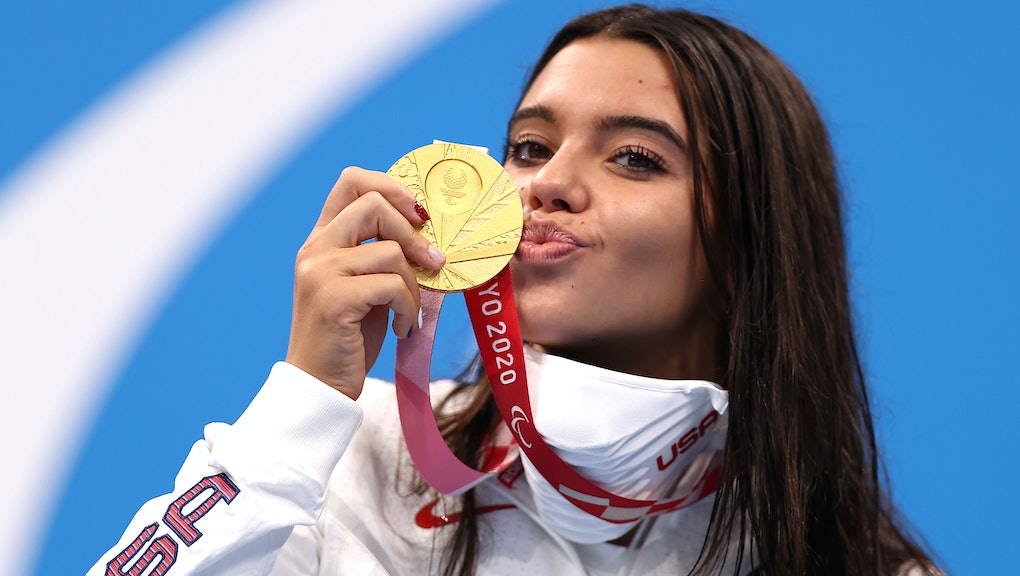 A 17-year-old swimmer from Long Island shattered her own world record at the Paralympic Games in Tokyo on Thursday, winning the first gold medal of the competition for Team USA. Anastasia Pagonis finished the 400m freestyle in 4:54.49, a whopping 10.85 seconds ahead of the silver medalist, Liesette Bruinsma of the Netherlands. Pagonis first broke the Paralympic record earlier in the day, when she won her heat in 4:58.40, almost 30-seconds faster than the runner-up.

In addition to being an incredible swimmer, and now, a gold medalist, Pagonis is a TikTok star with more than 2 million followers. She uses her massive platform to show people how she navigates life as a blind athlete, teaching them about adaptive sports and the visually impaired community. A video in which she explains how she brushes her teeth has more than 12 million views.

Her guide dog, Radar, makes frequent cameos on social media. The yellow Labrador Retriever was trained for two years by the Guide Dog Foundation and the New York Islanders hockey team, before he was matched with Pagonis. "He’s changed my life," she told NBC in June, after qualifying for the Paralympics. "I didn’t have any freedom or independence before him, and now that I have him, I feel like a totally different person."

The New York native was a star soccer player until she began losing her vision five years ago, because of genetic retina disease and autoimmune retinopathy. She was encouraged to channel her athletic skill into swimming and took to it like a fish, pardon the expression. Now, with a Paralympic gold medal in her trophy case, the blind swim-fluencer is being celebrated on a global scale. Through her social media content and her record-breaking races, Pagonis is showing other blind youth that they can conquer the world.

"I do this for that random little girl that’s sitting out there scrolling through her phone and just listens to one of my videos and hopefully I can help her and change her life in some way," Pagonis told the Washington Post. "And I do it for myself. People are going to make fun of me. People are going to laugh at me. I might as well make fun of myself." We're sure she's not hearing laughter today, just cheers.

More like this
How many times must victims relive their trauma in the Larry Nassar case?
By Chloe Stillwell
Colin Kaepernick's new Netflix documentary highlights the man behind the icon
By Keith Nelson Jr.
The first frustrating roadblock in Marilyn Manson’s sexual assault lawsuit is here
By Chloe Stillwell
Stay up to date