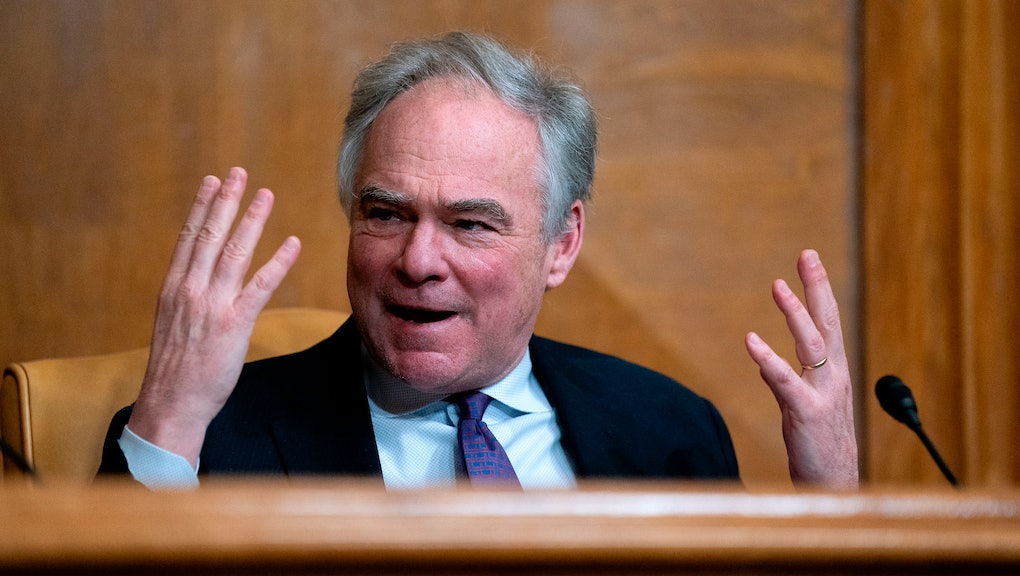 It's been three decades since Congress first voted to give the President of the United States an astonishingly wide berth to conduct military operations in Iraq and the Gulf, and almost two decades since they reasserted those permissions in the aftermath of the September 11 attacks. But now, in the wake of yet another American military operation in the Middle East, a bipartisan group of lawmakers has come together with plans to rescind the president's power to effectively start and stop wars from the White House. Instead, they want to put that authority back in the hands of Congress.

On Wednesday, Democratic Sen. Time Kaine of Virginia and Republican Sen. Todd Young of Indiana introduced a joint resolution to repeal both the 1991 and 2002 Authorizations for Use of Military Force (AUMF) bills. The AUMFs, which remain in effect to this day, have been used as executive cover for a host of military actions in the region. The resolution comes one week after President Joe Biden launched a surprise airstrike in Syria without first notifying Congress.

"Last week’s airstrikes in Syria show that the Executive Branch, regardless of party, will continue to stretch its war powers,” Sen. Kaine said in a press release. “Congress has a responsibility to not only vote to authorize new military action, but to repeal old authorizations that are no longer necessary. The 1991 and 2002 AUMFs that underpinned the war against Iraq need to be taken off the books to prevent their future misuse. They serve no operational purpose, keep us on permanent war footing, and undermine the sovereignty of Iraq, a close partner."

On the same press release, Sen. Young stated, "The fact that authorities for both of these wars are still law today is illustrative of the bipartisan failure of Congress to perform its constitutionally-mandated oversight role." He also highlighted the fact that both parties have a vested interest in the measure.

Indeed, the proposed joint resolution has earned support from a surprising array of cosponsors, including committed isolationist Sen. Rand Paul (R-KY), and Iraq War veteran Sen. Tammy Duckworth (D-IL), who explained in the release that "for decades, administrations of both parties have kept these authorizations on the books to justify military action in the region without returning to Congress to make their best legal case for the need for such action."

But while curtailing the ability for the executive branch to unilaterally act without consulting Congress certainly appears to be a step toward peace (of a sort), the issue seems less about warfare itself and more part of a longstanding fight between the two branches of government over where certain powers belong.

"Let’s be clear: this is not about this president or any other president," Rep. Barbara Lee (D-CA) — the only member of the House to vote against the the expansion of war powers in the wake of 9/11 — told Politico after Biden's Syria strike, referencing the need to repeal the AUMFs. "It is about the need to restore the balance of power with Congress in the use of military force."

More like this
Biden's idea of filibuster reform is to bring back painfully long and boring floor speeches
By Vanessa Taylor
More than 200 GOP lawmakers asked the Supreme Court to overturn Roe v. Wade
By Rafi Schwartz
Republicans are in an excellent position to weasel their way back to House control
By AJ Dellinger
Stay up to date