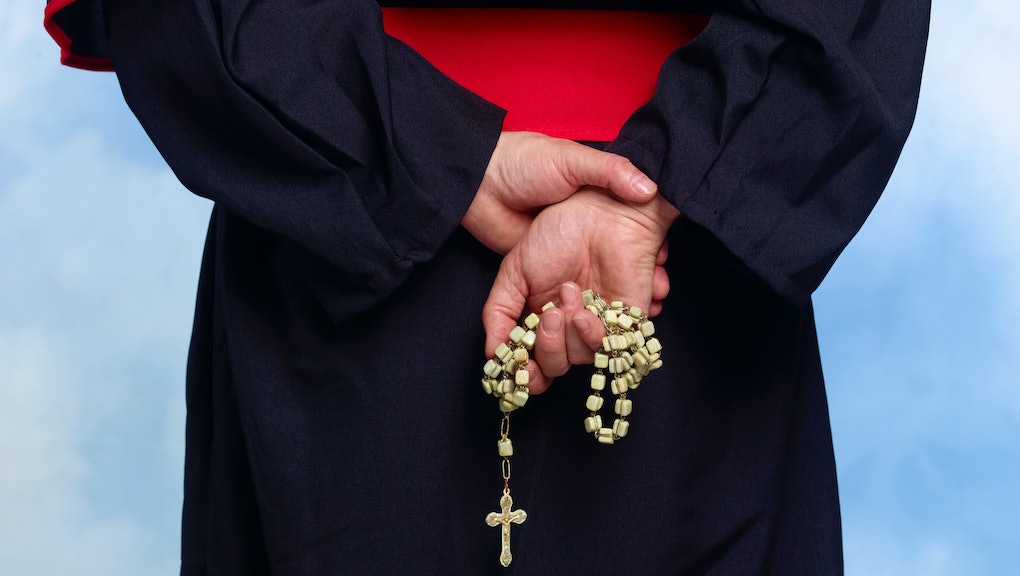 While outing queer people is a cruel in any context, it can get far more complicated when the person being outed is a high-ranking Catholic priest. In a recent shitball of a story that’s been continuing to gather shit along its route, cell phone data was used to reveal officials from the Catholic Church — both at the Vatican and in the U.S. — using the gay hookup app Grindr.

The Pillar, a conservative Catholic publication used “publicly available data” to track the phone activity of several priests, according to the New York Times. The reports from the Pillar’s (deeply unethical) investigation led to the resignation of Monsignor Jeffrey Burrill, the former general secretary of the U.S. Catholic Bishops’ Conference, who was accused of using the app and of hanging out at gay bars and bathhouses.

Look, there are a lot of unsavory things going on here and I am certainly not dismissing the fact that Burrill took an oath and then appeared to have violated it. But at the core of all this is the reality that homosexuality is still considered morally unacceptable by the Church — and worse, is often linked to pedophilia.

“That conflation of homosexuality and pedophilia is part of a longstanding effort by Catholic conservatives to blame the church sex abuse crisis on the presence of gay men in the priesthood,” the Times pointed out. And, despite Pope Francis’s more progressive stance on LGBTQ people, the Church generally still encourages queer people not to act on their desires (for other grown adults).

Also, it’s hard to take The Pillar’s Grindr report seriously when you consider just how homophobic and decidedly un-journalistic that publication really is. In the report about Msgr. Jeffrey Burrill, they also frequently conflate homosexuality with “sexual abuse and coercion.”

“We think investigating stories that matter can help the Church to better serve its sacred mission, the salvation of souls,” their website says. The Pillar could have focused on other priests as well — ones who were found using heterosexual dating apps as well — because they broke vows too, right?

They, of course, chose to zoom in on the priests who used Grindr, though. Also, their report discussed the presence of minors on Grindr, even though there’s no evidence that any of the priests met up with anyone underaged. In no way am I championing these priests, especially given the Catholic Church's reputation in this context, but I do believe this report was problematic in many ways and how this story has unfolded is very telling.

Fortunately, many in the Church also felt uncomfortable about the way The Pillar gathered its data. Steven P. Millies, the director of the Bernardin Center at Catholic Theological Union in Chicago, wrote an op-ed condemning the publication’s methods: “Whatever we may say of their practice of Catholicism, The Pillar's investigators paid little heed also to the canons of ethics for journalists.”

As a queer journalist (and a former Catholic), this story is a troubling reminder of how irresponsible journalism can perpetuate the narrative that gay men are predators who are fundamentally deceitful and immoral — a terrifying and wholly ignorant myth that has kept us in the fringes for so long. But beyond that, as the Atlantic pointed out, this is a story about what happens when you combine the clusterfuck that is institutional homophobia, unethical reporting, and growing breaches in personal data.