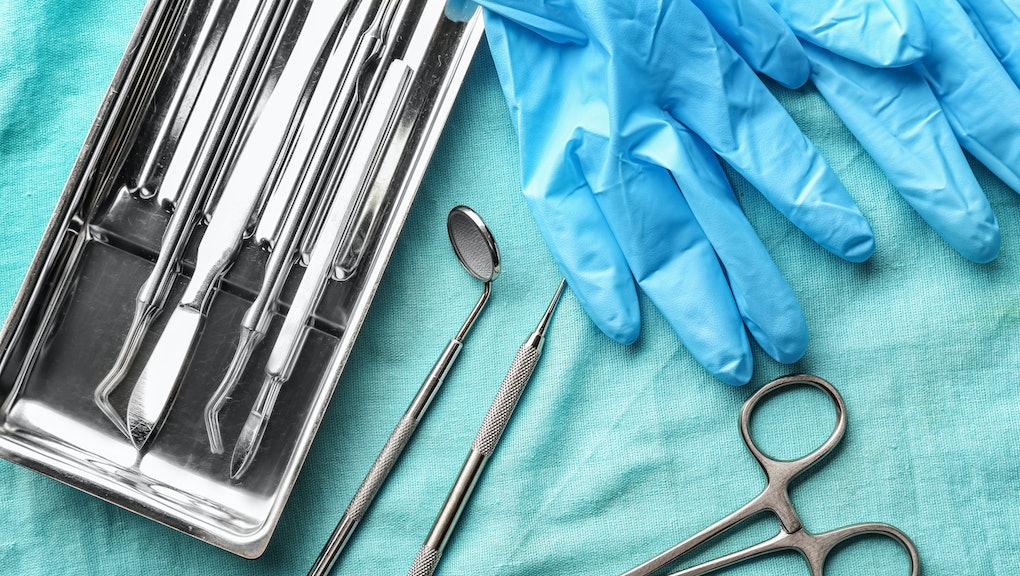 The infamous jaws of a great white shark have nothing on one seven-year-old from India. In a blog post published this morning by the Saveetha Dental College and Hospital in Chennai, the institute explained that surgeons there had successfully removed 526 teeth from a boy’s mouth —this is nearly double the amount of teeth typically found in great whites. All the teeth were piled into a 200-gram sack attached to the boy’s lower right jaw. Surgery to remove it, which was free of charge to the boy’s family, took place on July 11, according to The New Indian Express.

The parents of the child — identified by the Express as P. Ravindran — sought treatment when they noticed swelling in the area, the blog post said. They’d worried it was a cancerous tumor, and it wasn’t the first time that part of Ravindran’s mouth had been examined. When he was three, his parents “noticed a small swelling at the right lower jaw, but he refused to co-operate for any investigative procedures as he was very young,” the post said.

The swelling slowly increased over four years, and after the 4 x 3-centimeter lesion was detached from Ravindran’s jaw last month, doctors x-rayed it, saw the tiny structures, and concluded it was a “compound odontoma,” defined in one medical journal as “regularly calcified tissue that bear similarity to teeth or appear as a collection of small teeth.”

For five hours the doctors then carefully removed the miniature teeth from the sack. They were “reminiscent of pearls in an oyster,” one surgeon said, according to the hospital. Another doctor on hand added: “This pandora box of miniature teeth is a jewel on our crown.”

Tooth sizes varied from 1 mm to 15 mm, and “each resembled a tooth with crown covered by enamel and a root like structure.”

Other than requiring molar implants when he turns 16, due to the growth preventing the early development of those teeth, Ravindran was otherwise unaffected by the sack, its contents, and the surgery to remove it, The New Indian Express reported. The publication also indicated that the boy’s doctors suspect the “cause of the condition could be either genetic or environmental.”

Dr. Joseph Brofksy, section head of pediatric dentistry at Cohen Children’s Medical Center in New York, says the teeth found in compound odontoma are not and could never develop into “functioning teeth.” There’s just not enough room in the sack for that to happen. “One tooth is starting to develop and it just breaks down in that sack and starts producing more,” Brofsky explains. “But they are made out of enamel and they do have some other dental parts, so they do call them teeth.”

He says no one is sure what causes compound odontoma to form but the condition could also be a result of trauma. In 35 years of practicing pediatric dentistry, he says he’s only seen two or three cases of compound odontoma — though he says that an oral surgeon with a broader age range of patients could see more.

“It’s cool,” he says of the compound odontoma. “When you’re taking [the pieces] out with the oral surgeon … you’re going, ‘how many things are in there?’” Profsky wonders if the number of fragments the doctors in Chennai came up with, 526, might be “a little high.” These types of fragments can be as small as half a millimeter, Profsky says, and, thus, difficult to discern.

“I’ve never heard of 500, but it’s not unthinkable,” he says. In the compound odontomas Profsky’s seen or heard of, the number of pieces sometimes adds up to 100 or perhaps 200. But in looking at the x-ray photos of the the boy's case online, and observing the size of the sack and its contents, Profsky concedes that it appears to be legit.

More like this
Jeff Bezos is too rich for one lifetime, so he's trying to live forever
By Joseph Lamour
Biden's new office to fight for environmental justice already faces an uphill battle
By AJ Dellinger
Studies suggest that Pfizer is no longer the cooler vaccine
By Ian Kumamoto
Stay up to date