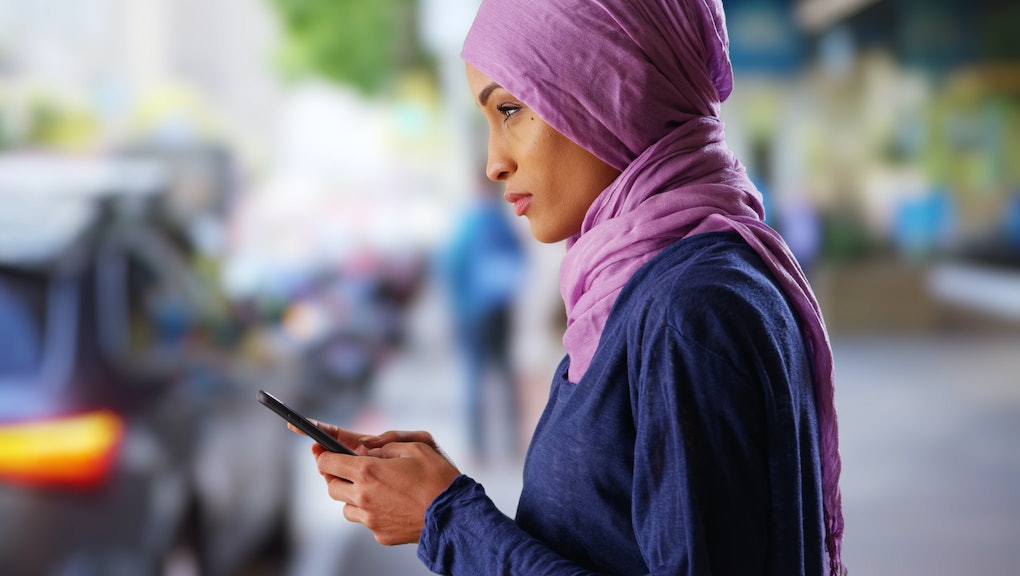 If you're Muslim, you know Muslim Pro, a popular Quran and prayer app. When I converted to Islam, it was one of the first apps people suggested I get, and that's no surprise. According to its website, Muslim Pro has been downloaded over 95 million times around the world. But earlier this week, Motherboard reported that Muslim Pro is connected to a United States military data supply chain. While surveillance is nothing new to Muslims, hearing that a prayer app was somehow transmitting information to the U.S. military has left many feeling unsettled.

In its privacy policy, Muslim Pro identifies that it works with two data location companies, Tutela and Quadrant. However, Muslim Pro failed to mention one other company it sold data to: X-Mode. Motherboard found that X-Mode was not only collecting location data from Muslim Pro, but also other identifying information, like the WiFi network a phone was connected to, timestamps, and information about the phone itself. This data was then sold to contractors and, by extension, the U.S. military.

Kameelah Rashad, the founder of Muslim Wellness Foundation and a psychologist specializing in racial trauma and the impact of anti-Muslim bigotry, told Mic in an email that her initial reaction to Motherboard's report was "one of both utter lack of astonishment at the violation, and also of anger and frustration at the relentless nature of surveillance and how profoundly vulnerable our communities are."

The report prompted immediate backlash. Kausar, a student based in the United Kingdom who requested to remain anonymous, "felt very betrayed" by the news, they told Mic. The feeling was "maybe out of naivety," Kausar said, adding, "The hyper-surveillance of Muslims seems to have criminalized every kind of Islamic practice, even prayer. ... I think the most insidious fact of all was [that] they sold data to the U.S. military, an organization whose essence for the last 20 years has been terrorizing Muslims in the most inhumane way."

Aqsa Rashid, a student based in the Washington, D.C., metropolitan area, was also struck by the de facto criminalization of religious practices. "I was generally unsurprised [by the report] because I know how insidious the state can be. But at the same time, it's not the kind of reaction I'd have towards people telling me about how Twitter, Facebook, or Insta sells our data," Rashid said. "This is an app that a lot of us trusted and have had on our phones for years, and it brought a lot of comfort. We just wanted a place to read a dua, and we can't even do that in peace."

A day after Motherboard's report, Muslim Pro released a statement claiming, "Media reports are circulating that Muslim Pro has been selling personal data of its users to the U.S. military. This is incorrect and untrue." To be clear, media reports do not state Muslim Pro directly sold to the military, but rather that one of the third-parties it contracted with did. In the same statement, Muslim Pro stated it had "terminate[d] our relationship with all data partners, including X-Mode." But for many, the damage was already done.

"The report of Muslim Pro's privacy and data violation has struck a chord, because it strikes at the heart of a spiritual practice that is too central to who we are and what we believe as Muslims," Rashad, the psychologist, told Mic. "It's a devastating betrayal to realize that American Muslims might have inadvertently been mined for information harmful to us, through a tool that helps us pray. Such a disgustingly ugly and cunning Trojan horse."

Yasmin, an educator based on the East Coast who declined to provide her last name, pointed out how race also shapes the response of Muslims to news of surveillance. She told Mic, "Black Muslims in particular have an intimate understanding of the gaze we continue to live under. The shock of some Muslims speaks to the humanity they are afforded under white supremacy. Black Muslims, ejected from the category of human via their Blackness, exist under surveillance, having long understood they are denied any marker of human."

The intersection of race and religion is critical in understanding the history of Muslim surveillance in the U.S., as Black Muslims make up about a fifth of all U.S. Muslims. In 2018, a study published by SAGE Journals found that "previous research suggests a high prevalence of entrapment in post-9/11 terrorism sting operations. ... Strikingly, the most consistent predictor of entrapment is [B]lack Muslim identity."

"While our non-Black Muslim counterparts continue to feel violated and traumatized by the news of Muslim Pro, Black Muslims do not and never had a sacred space to worship or be in community with one another," Yasmin explained. "The actions and movements of the state are memorized, practiced, and then reinforced and used against Black Muslims. In short, we are surveilled by the very ummah scrambling when the gaze is then turned upon them."

Apps are important aids in religious practices for many Muslims, especially when people are based in non-Muslim communities. For example, a resounding athan, or call to prayer, is hard to come by in many parts of the U.S., but Muslim Pro allowed people to set it as an alert on their phone for the five daily prayers.

"Selling data to the U.S. military is the equivalent of teaming up with Abu Lahab to destroy the ummah."

But as illustrated by Motherboard's report and the U.S.'s past surveillance of Muslims, places of comfort can easily become compromised. The popularity of prayer and other Muslim-marketed smartphone apps now makes them the new frontline in gathering information about Muslim communities. Rather than utilizing manpower by sending mosque-crawlers into masjids or posting federal agents on residential blocks — surveillance tactics that are expensive and time-consuming — the U.S. government can just purchase information from seemingly innocuous apps.

While it's unclear just how many people involved with Muslim Pro are actually Muslim, a support team response in 2019 confirmed that Muslims make up part of both its team members and shareholders. To Asma Alabed, a writer based in the Middle East/North Africa region, the fact that other Muslims are cashing in on this surveillance exchange is part of what makes Muslim Pro's participation so disturbing.

"Many Muslims have adapted a capitalist mindset that is market-oriented, at the expense of the principles of our faith and the Prophetic model of business," Alabed told Mic. The concept of "being sold out by our own," Alabed continued, "really made me question how identity politics have played into what we consider ‘Muslim’ and how liberal performativity has so pervasively warped our principles and understanding of faith."

For Alabed, Muslim Pro's entanglement in a military supply chain illustrates how rather than wrestle with their complicity in harming their communities, some Muslims are content "just rid[ing] with it and give in to our oppressors."

"Selling data to the U.S. military is the equivalent of teaming up with Abu Lahab to destroy the ummah," Alabed concluded. "Nah. It’s the hypocrisy for me."

The details about how exactly X-Mode used the data it acquired from Muslim Pro are slim. In an e-mail, X-Mode told Motherboard that its work with U.S. military contractors "is international and primarily focused on three uses: counterterrorism, cybersecurity, and predicting future COVID-19 hotspots." But it doesn't really matter whether or not it's confirmed that this data was actually used for surveillance, because another crucial aspect of surveillance is the psychological havoc it wreaks on communities.

In 2014, a study published in the Journal of Muslim Health found that "experiences with government surveillance are accompanied by increases in anxiety over future surveillance [and] avoidance discussing topics that may increase the possibility of surveillance." These mental health impacts are not simply accidental byproducts of surveillance, but in fact a desired outcome of the practice to begin with, as outlined by the Muslim Wellness Foundation in a Twitter thread responding to Motherboard's report.

"Let's be clear — the monitoring and surveillance of American Muslims, (and other minoritized and marginalized groups), is a form of psychological warfare," Rashad, the founder of the Muslim Wellness Foundation, told Mic. "It is designed to induce paranoia, anxiety, hyper-vigilance, fear, and exhaustion. This strategic, subtle, and overt targeting erodes a community's sense of safety and trust. Ultimately, this warfare has a very real material and psychological impact such that we become consumed with the act, rather than the steps necessary to challenge a system that would consistently and predictably deploy these violent tactics."

Finding strategies to cope with the mental health harms of surveillance is, then, fundamental for Muslims moving forward. Rashad said, "As a psychologist who is also a Black, Muslim woman, I would first remind our communities that Allah is and remains our protector and guide. We put our trust in him and must remember that oppressors will never prevail."

"Secondly," she continued, "as recommended by one of Muslims' often cited hadith/traditions — trust in Allah and tie our camel. Tying our camel in this instance means that we learn about the long history of U.S. surveillance, importance of digital safety and security, and willingness to disabuse ourselves of the romantic and utterly false notion that 'this can't happen in America!' It has, it does, and it will continue to occur. Essentially, we need to be prepared so they won't catch us slippin'!"

"As a generation raised on the internet, our elders' warnings of 'strangers on the web' now translates to 'corporations and institutions on the web'. Muslims alone are not being watched. In fact, one of capitalism’s grounding tenets is a steady observation of would-be consumers. Apps, be they targeted toward Muslims or not, trap us in never-ending cycle of selling our data for profit," Yasmin said.

"We must then consider, as we move full-steam ahead towards continued globalization with Silicon Valley leading us, the ways in which our very existence is publicized and the consequences that brings."

More like this
How the shock and confusion of 9/11 enabled our modern conspiracy era
By AJ Dellinger
Biden's new office to fight for environmental justice already faces an uphill battle
By AJ Dellinger
Vaccines are good. Threatening to evict someone over them is not
By Rafi Schwartz
Stay up to date