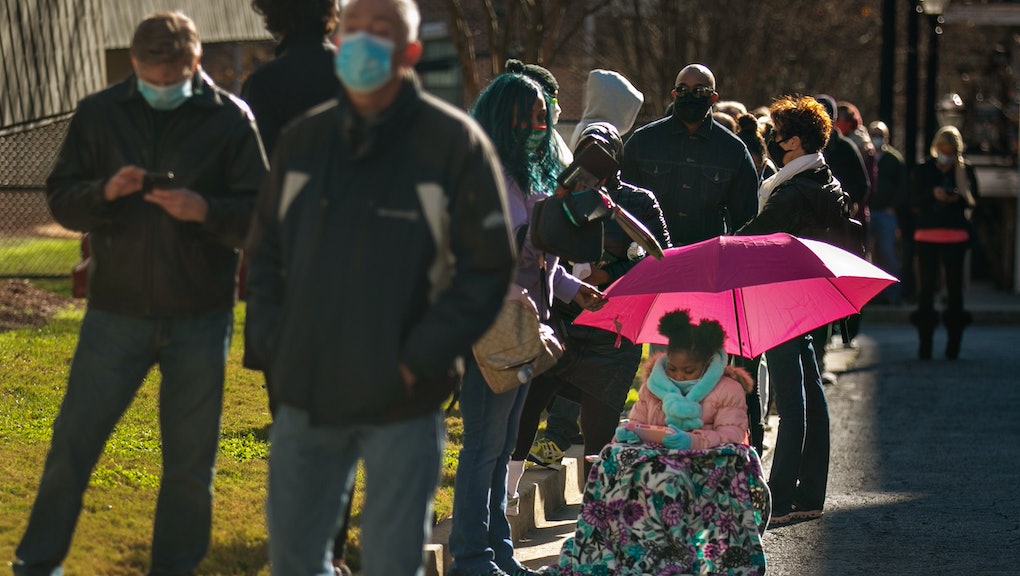 A Georgia federal judge blocked yet another voter suppression lawsuit

Late Monday evening, a federal judge blocked an effort to keep more than 4,000 people across two Georgia counties from casting their ballots. With seven days until the two Georgia runoff elections to determine which political party takes control of the Senate, the order could have a direct impact on election results given that the races will likely come down to a handful of votes.

The Muscogee and Ben Hill County Boards of Elections attempted to purge thousands of voters from their county rolls based on data obtained from the U.S. Postal Service. The boards of election, supported by Texas-based organization True the Vote, claimed that if voters' registration information matched change-of-address forms where the new address was out of the state, then those voters should be rendered ineligible to cast ballots in Georgia.

But the federal judge, Leslie Abrams Gardner, sister to former Georgia gubernatorial candidate Stacey Abrams, ruled that this method of attempted voter verification was actually thinly veiled voter suppression. Democrats argued that change-of-address records are unreliable and they don't really prove anything — and they're that certainly not grounds for removing someone's registration from the voter rolls. It's also voter suppression that violates federal law — the National Voter Registration Act mandates that this form of voter address verification can't be done within 90 days of a federal election, something Gardner noted in her ruling. Gardner also ruled that no Georgia voter targeted by the lawsuit should have to cast a provisional ballot, which are much more likely to be rejected than regular ballots.

Marc E. Elias, an attorney with the National Democratic Party, which brought the suit against the two Georgia counties, told Politico that the judge's ruling was a "blow to GOP voter suppression," and that he would "continue to monitor how other Georgia counties respond to the suppression scheme. ... Where necessary, we will sue and we will win."

It's common for so-called election integrity or voter verification efforts by Republicans to target areas that swing Democratic. The rejected effort in Georgia is a perfect example: Muscogee county voted overwhelmingly for Biden and is not a majority-white district. So this isn't the first lawsuit we've seen in Georgia this year, and it probably won't be the last. When elections come down to a few thousand votes — President-elect Joe Biden won Georgia by 12,000 — lawsuits like this are inevitable.

More like this
Nancy Pelosi took a stand on the Jan. 6 committee, and it left Republicans whiny as hell
By Rafi Schwartz
The first insurrection felony sentence is here, and nobody's happy about it
By Rafi Schwartz
Biden's idea of filibuster reform is to bring back painfully long and boring floor speeches
By Vanessa Taylor
Stay up to date