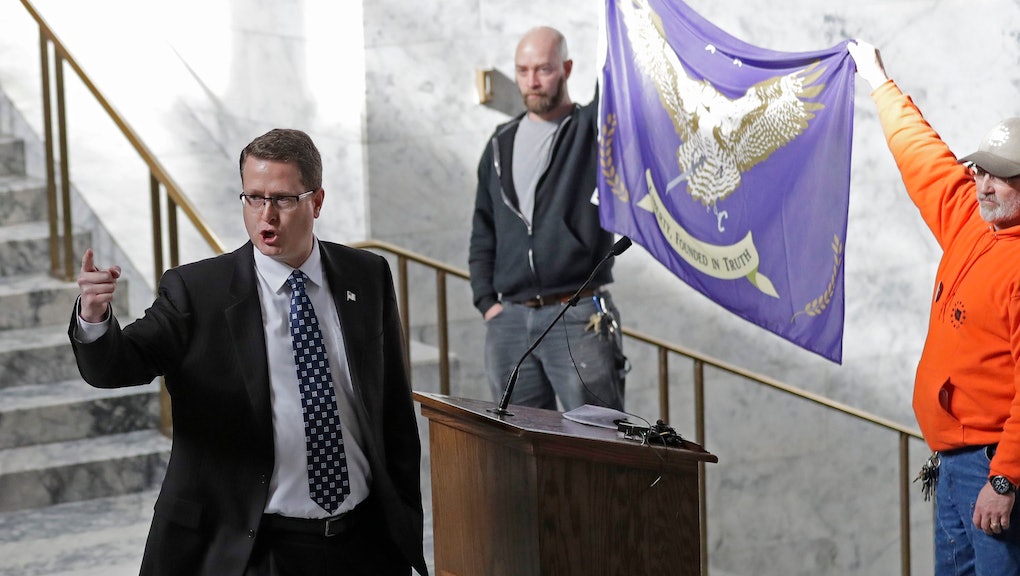 A GOP state legislator in Washington is an active participant in a far-right separatist movement. Matt Shea is a legislator in the eastern part of the state, which is home to the so-called Patriot Movement of right-wing agitators, militant ranchers, and armed militias who see themselves as being in conflict with the federal government. In 2016, they laid siege to Oregon’s Malheur National Wildlife Refuge, leading to a standoff with law enforcement, who fatally shot an armed rancher. Shea played a role in this, as well as other similar incidents, according to a report published by the Washington State Legislature last week.

“Representative Shea, as a leader in the Patriot Movement, planned, engaged in and promoted a total of three armed conflicts of political violence against the United States Government in three states outside the state of Washington over a three-year period,” reads the report, which was released last Thursday. “In one conflict Representative Shea led covert strategic pre-planning in advance of the conflict.”

The Republican minority leader, J.T. Wilcox, tweeted that Shea “has been suspended from any role in the House Republican Caucus.”

“He should resign,” Wilcox added. “He cannot use House Republican staff, he cannot meet with the caucus, his office will be moved.”

Shea called the investigation a “sham” and a "coup", and said that he would not step down.

On Tuesday, The New York Times published a story on Shea, revealing that he has caught the attention of local law enforcement in his district due to his far-right activity. According to the report, law enforcement was disturbed by Shea’s engagement with militia groups and his rhetoric, including talking about the creation of a 51st state named Liberty in eastern Washington and calling for a new Christian government. According to the Times, Shea distributed a document called the “Biblical Basis for War” in which he says that everyone who supports abortion, same sex marriage and communism must “surrender.”

The document included plans for militias to take over law enforcement and to enact “constitutional changes” to “sanctify [the government] to Jesus Christ.”

In an interview with the Times, Spokane County Sheriff Ozzie Knezovich said that Shea is just the tip of the iceberg of a growing far-right separatist movement in the Northwest. ““I think a lot of people underestimate the size and the growth of what’s going on,” he said. Knezovich was so disturbed by Shea’s actions that he approached him and warned about the dangerous people he was associating with.

“My message was: ‘Matt, if you get involved in this stuff and get that label, there will be no saving you,’” the sheriff told the Times.

Shea only expanded his profile in far-right circles, though, and ultimately Knezovich sent information about him to the FBI. “He’s not about preserving America," Knezovich said. "They are about starting their own country.”