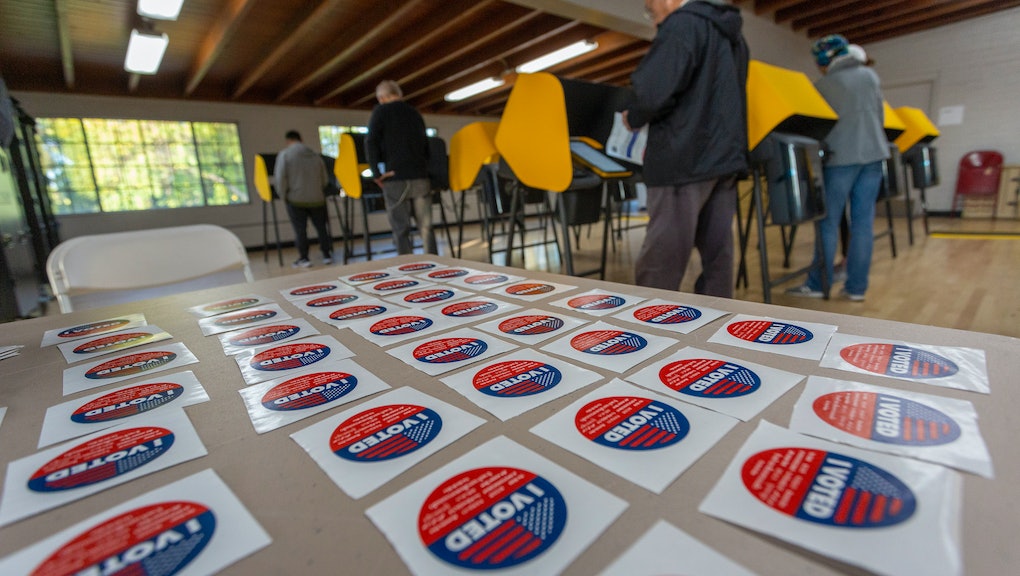 A guide to down-ballot voting

In a year with a presidential election dubbed the most consequential of our time, it figures that the fight between Joe Biden and Donald Trump is getting most everyone's attention. When you fill out your ballot, though, you'll see a number of other names and titles, propositions, and referendums that are asking for your support. If you're like me, you might have been too consumed with what might happen to the White House to do your research about all of these other down-ballot races. There's still time to catch up, though — and I promise it won't take that much effort. Here's the Mic guide to voting down-ballot:

Why are down-ballot races important?

Sure, the president has a lot of power to sign executive orders, nominate federal judges, or represent the country to foreign nations, but most everything else about your life is determined by your state, county, or city. Taxes, zoning, schools, and spending on entities that gobble up public funding (like prisons) are by and large determined by local officials.

Though they don't get as much press, members of your city council, school board officials, and local elected judges actually have the biggest impact on your day-to-day life. Want to defund your local police? Take it up with your city council. Think that public schools should offer free SAT tutoring? Talk with your school board members. Want to build a community garden? That may be a task for the city's parks and recreation department.

How do I know what down-ballot measures are even on the ballot?

Down-ballot items get added to the ballot depending on a state's rules. For instance, in some states a ballot item needs a certain number of signatures, to show that there's broad voter interest, before it actually gets placed on the ballot. In other states, the legislature votes on which measures people will be able to vote on. No matter how they're placed on the ballot, referendums and propositions need your vote.

A great place to start to educate yourself is Ballotpedia. You can type in the name of your state, and the search engine will generate a list of candidates for state government, local judges, ballot propositions, and more. Your state's secretary of state's office website is another great resource, as that office runs elections. There, you should be able to find sample ballots, registration information, and voter guides.

Some states send voters a voter guide in the mail along with their ballot. If you've received one, you should absolutely take a few minutes to sit down with it, as it includes comprehensive information about each measure on your particular ballot, straight from the source. Be mindful, however, that interest groups and proponents of ballot measures have a hand in crafting the language that describes the items, so read with a little skepticism and supplement that information with your own research. The League of Women Voters, for example, put out a great set of guiding questions for evaluating ballot propositions, which you can check out here.

Okay. What else can I do to prepare for down-ballot voting?

A good place to start is to seek out an organization you trust, and use its recommendations for how to vote on particular down-ballot measures. Ballot measures are intended to withstand legal scrutiny, which means that they aren't necessarily written plainly or in a way everyone can understand, and a trusted organization can help you parse the real-world affects of a particular proposal

If you're a voter who's most concerned with civil liberties like voting, abortion, or access to public services, then you might want to check out voter guides put out by the American Civil Liberties Union. The ACLU of Florida offers a justice voter guide, for example, which includes candidate questionnaires and explainers on the importance of elected officials like sheriffs or the state attorney. If you prioritize labor rights, try a guide crafted by a state or local chapter of a union; in California, the SEIU 521 offers a voter hub where they offer recommendations on how to vote on ballot propositions and who to vote for in local elections. If you're primarily concerned with environmental justice, then check out endorsements and voter guides from organizations like the Sierra Club. You can always look for other guides online by doing a Google search for "[organization name] voter guide."

Another resource you might want to check out are local newspapers that you trust. The editorial boards of the Houston Chronicle, Los Angeles Times, and Chicago Sun-Times — just to name a few — offer endorsements for their readers. A local newspaper is one of the best places to get a sense of how a particular ballot measure will affect your community. If you tend to agree with the paper's perspective, then their recommendations could be extra helpful in determining how you want to vote.

Can I get an example of a proposition?

Sure! Here are some down-ballot propositions of consequence at the state level:

More like this
Live from New York: Revisiting the totally bonkers era of post-9/11 'SNL'
By Rafi Schwartz
Oops, the Arizona recount the MAGA crew demanded actually took votes away from Trump
By Rafi Schwartz
This poll shows just how strong Trump's hold on Republican voters is
By AJ Dellinger
Stay up to date