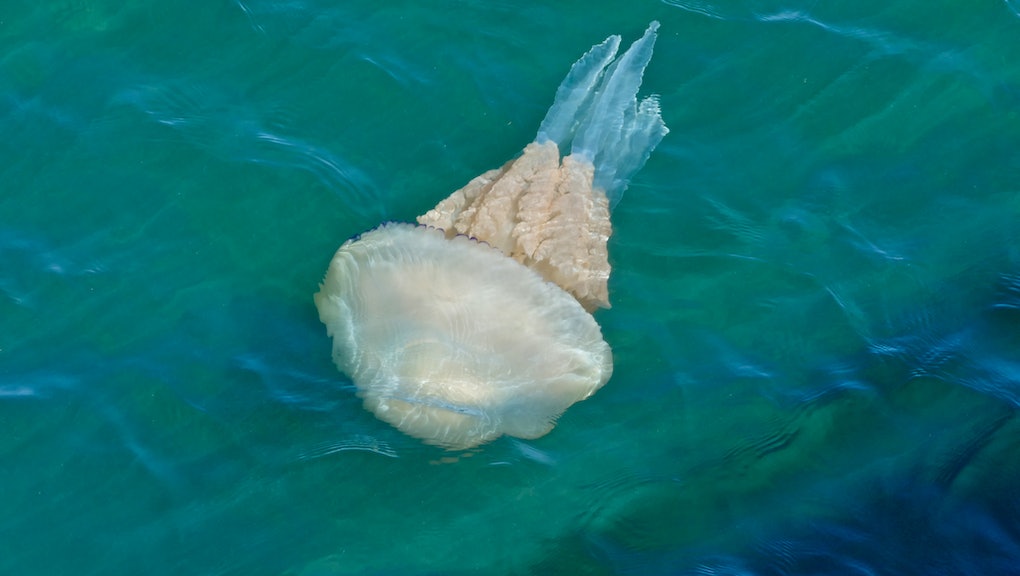 Most swimmers would probably freak out if a human-sized jellyfish swam alongside them. But wildlife biologist and host Lizzie Daly yelped with excitement after experiencing just that.

In a video posted to her Facebook page on Saturday, July 13, Daly can be seen swimming with a giant barrel jellyfish (Rhizostoma pulmo) during a dive off the coast of Cornwall in the UK, as Motherboard reports. The biologist told The Guardian that she and underwater cinematographer Dan Abbott had sighted some smaller jellyfish around a nearby reef when the barrel jellyfish suddenly appeared from the murky water.

Abbott’s footage shows Daly swimming with the eerie, translucent behemoth, its lace-like arms trailing behind it. Although these arms contain stinging tentacles, Daly said that the creature packs only a mild sting and doesn’t pose a danger to humans, according to USA Today.

The jellyfish hung out with the Daly and Abbott for about an hour. The event occurred, coincidentally enough, on the last day of Wild Ocean Week, an online video series Daly created to highlight local wildlife and fundraise for the Marine Conservation Society, a marine charity in the UK, per Motherboard.

Daly told USA Today that the jellyfish was around five feet long. Indeed, the barrel jellyfish, also called the dustbin-lid jellyfish, ranks as the largest jellyfish in coastal UK waters, according to The Wildlife Trusts. Its pulsating, parachute-shaped bell alone can measure up nearly three feet across, and it can tip the scales at up to 77 pounds.

“I've never seen a [barrel jellyfish] or any jellyfish that big,” Daly said on-camera shortly after returning to land, soaking wet and exhilarated. “It was the size of my body.”

Cheryl Ames, a research collaborator with the Smithsonian National Museum of Natural History, expressed similar amazement to the Washington Post. She told the newspaper that seeing a barrel jellyfish that large was “incredible,” adding that they could never grow to that size in an aquarium.

Ames noted that barrel jellyfish roam not only the waters off the coast of the UK, but also the Mediterranean, and that they feed on small crustaceans, zooplankton, and fish. According to The Wildlife Trusts, they’re typically seen washed up along UK beaches in May or June, lured ashore by plankton blooms, a major food source for barrel jellyfish. Swimming beside them, like Daly did, is rare, Motherboard noted.

Daly seemed to consider her experience as almost spiritual, describing it as “serene” and “grounding,” according to The Guardian. “It was very humbling to be swimming alongside of it,” she told USA Today. “It was just a pretty majestic creature.”

Michele Kiernan of the Marine Biological Association in Plymouth in the UK said Daly’s encounter was owed to a “long spell of no rain in the southwest,” which made the water clearer and the barrel jellyfish more visible, according to The Guardian. Kiernan also pointed to a possible decline in leatherback turtles and other animals that prey on barrel jellyfish, as marine animals become increasingly ensnared “in entanglements and waste.” According to the National Oceanic and Atmospheric Administration, at least 200 different species get entangled in fishing nets and other marine debris.

In a CBS News Report, Daly said that she and Abbott also saw dolphins, minke whales, and seals while shooting their video series. But the barrel jellyfish seemed like the perfect coda to their expedition. “What a way to finish Wild Ocean week,” she said in her video. “Absolutely incredible.”

If this gentle giant of a jellyfish isn’t enough to make you care about the wildlife in our oceans, Daly’s infectious awe might do the trick.

More like this
The ocean is about to swallow a climate research facility, which feels fitting
By AJ Dellinger
Leaked calls reveal the conservative "master plan" to tank climate action
By AJ Dellinger
"Brood X," a plague-level cicada infestation, is coming for us this spring
By Rafi Schwartz
Stay up to date