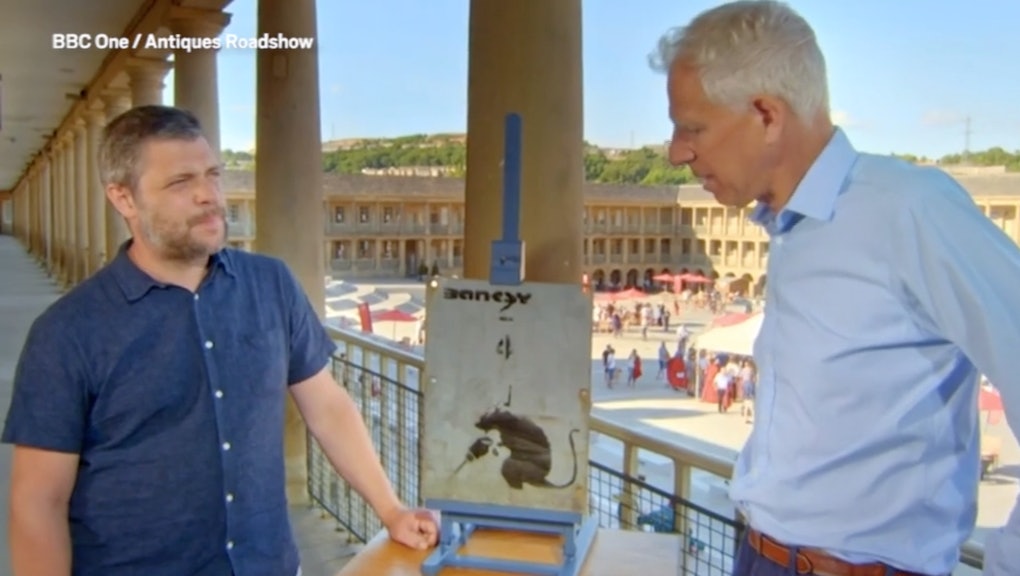 Screenshot via BBC One

Listen, I’ll be the first to admit that some of my favorite art in my home is stuff I found on the street. For example, I’ve got a killer Picasso print from the 1980s that a neighbor decided to toss and I rescued from the trash when I lived in the East Village circa 2011. Another time, my friend found an amazing Thelma & Louise poster on the street in Brooklyn and we legitimately fought over which of us should be allowed to keep it.

That said, a shameless British man took this impulse to a morally dubious place when he went on Antiques Roadshow recently and tried to get a Banksy piece appraised — after admitting he ripped it off a wall. The unidentified man explained that he spotted the small work of street art — of a rat holding a power drill — near the Brighton seafront in 2004 and decided to make it his. “It looked loose, I went over — pulled it off, basically,” he admitted, laughing about how it took “a little bit of a tug” to pry the piece off the wall.

Art expert Rupert Maas had bad news for the man, however. While an authenticated Banksy of that size would’ve fetched at least $25,000, a stolen Banksy is worthless, since the artist refuses to authenticate it — as he always does when people take his art from the public spaces where they were installed. “He calls it pest control,” Maas told the would-be Banksy owner. “I think the message here is, if you do see a piece of graffiti art out there, leave it — leave it for the public,” the art expert added.

This isn’t the first time someone’s gotten what’s karmically coming to them for pilfering valuable objects, of course. A Canadian tourist who stole artifacts from the ancient Italian city of Pompeii 15 years ago recently returned them because she claimed they were cursed. In a letter confessing her crimes, the woman explained she took two mosaic tiles, parts of an amphora, and a ceramic fragment from Pompeii’s archaeological park in 2005, when she was in her early 20s. At the time, she said she wanted to own a piece of history that “nobody could have” but later realized the objects had “so much negative energy […] linked to that land of destruction.” She blamed the theft for a spate of misfortune she suffered in the years after, including two bouts of breast cancer and financial hardship. “Please, take them back, they bring bad luck,” the woman wrote.

Closer to home here in the U.S., 80-year-old Brooklyn artist Harvey Wilson made waves on social media after someone took lots of paintings from outside his Fort Greene home. According to flyers the artist plastered around his neighborhood, he was displaying a bunch of work created during the pandemic on the street (indoor galleries pose a legitimate health risk to octogenarians, after all). But when he stepped away for a few moments, all the art disappeared. The elderly painter is understandably devastated, according to those who know him, but is holding out hope that someone scooped them up, mistakenly thinking they were free, and will return them for a small reward.

But the incident is a potent reminder that if something seems too good to be free, it probably is. To sum up, unless you can be certain art was bound for the trash, maybe think twice before claiming it as your own. You never know who you might be stealing from.