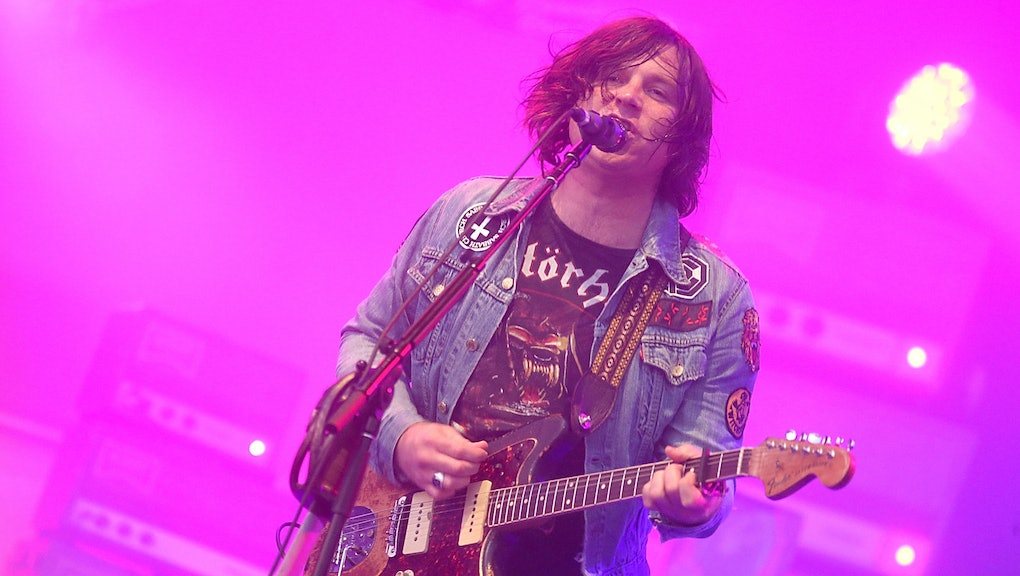 The #MeToo movement has had a storied evolution for almost four years now. Just in its first year, in 2018, the New York Times reported that the movement had seen the demise of 201 prominent men, with 50% of their replacements being women. So in 2021, and considering all of the non prominent ripple effects of the more high-profile cases that began with the reckoning of Harvey Weinstein, suffice it to say that #MeToo sufficiently shifted culture. Don't get me wrong, the patriarchy is still high, but there's an awareness, more channels to speak truth to power, and a general air of "ew" that have made life a little bit less like Handmaid's Tale for many women. But the now somewhat routine experience of a man being outed as an abuser has created the awkward outcome of society having to constantly ask itself what to do with these men after they've been Me Too'd. And Ryan Adams has taken to his social media this week to make us all feel about as uncomfortable as possible about that.

Ryan Adams was an indie phenom on the cusp of mainstream musical success in the early aughts and into the 2010s. He was a beloved institution in the rock, folk and punk scenes, and a prolific one at that. Over his two decades of success, he released over 20 LPs if you count all of his iterations between Whiskeytown, the Cardinals and other off shoot side projects, and earned seven Grammy nominations. But on the other side of Adams' often romantic-leaning catalog apparently was a darkness. It all came crashing down after a 2019 exposé detailing a range of abuses towards multiple women, from his ex-wife Mandy Moore, to Phoebe Bridgers, to a 14-year-old fan (the last of which Adams "unequivocally denies" and there has yet to be an update in that specific sexting scandal).

The initial report detailed what sounded like systematic, and potentially pre-meditated abuse, in which Adams would seek out young unknown female musicians and promise to help advance their careers while putting them in increasingly uncomfortable sexual situations. Bridgers, who ended up dating Adams, described obsessive and controlling behaviors, and her breakup track "Emotional Motion Sickness" painted an even grimmer picture of a man obsessed with manipulating young women with lyrics like "You said when you met me, you were bored/ And you, you were in a band when I was born." Adams, like with many other women, tried to scorn Bridgers and harm her career when she left him. The list of varying offenses goes on, and it did not take long for the court of public opinion to sufficiently cancel Adams.

While he did post a lengthy apology via the Daily Mail a year ago, it was pointed out by both Moore, and Karen Elson, that it seemed to lack sincerity since he hadn't tried to make private amends with either of them. Instead it seemed to be more of a desperate attempt to win favor back with a blanket "I'm sorry" that did not specifically address any details of the allegations. It certainly felt more like he wanted to just be redeemed, instead of actually grappling with his behavior.

But now Adams is going one giant leap further, and is begging on his Instagram for any label possible to put his music out while complaining, "I'm 46 and scared and I'm gonna be living in my sister's basement." And while Adams' situation might be dire, it's the biggest white whine in the world for such a successful, famous white man to now be bemoaning the ruin he brought on himself. It's also questionable as to what ruin really looks like for Adams. Only he and his accountant know the figures, but considering the record level of poverty in our country after a pandemic, it's hard to imagine Adams is in a situation recognizable by regular people who are struggling to make ends meet.

Variety initially reported yesterday on Adams' now deleted posts in which he said, among many desperate things, "I know I’m damaged goods...and they aren’t the ideal thing, but I had a label interested for months and they wasted my time...I just really want a second chance to make some music — maybe help other people believe you can get up out of the gutter and be something." It is ironic that he wants to "help people" when he's only really trying to prove that he can have redemption by just asking for it. It's worth noting that Adams has his own label as well, on which he's put out two records since his fall from grace — they just didn't chart in America or the UK. A more sincere move would be to be using his PAX AM label to make amends to the artists he's wronged. But it seems he is more preoccupied with begging for money and an audience.

While the posts have been deleted, Adams went back on his social media to yell at Variety for shaming him and bemoan the subsequent loss of his publicist. In a post-run photo he added a lengthy caption alleging that he was being "too real" and that people just can't take how rock and roll that is. He points out that publications won't cover his music, but they'll "exploit his struggle with mental health and attempts to right his career." He eventually proves he doesn't understand repercussions nor cancel culture by adding "I’m only cancelled until they can disparage me. To me that doesn’t feel like punishment. Trust me I do that to myself more than anyone ever will. It just feels like abuse."

It is truly wild to see a man who abused numerous women attempt to victimize himself so boldly, and to claim abuse himself just because there are consequences for his actions. The most ridiculous part is that Ryan Adams is still making music, it's just not selling and he has to put it out himself — like the women who he abused had to at the start of their careers after he broke his promises to help them when he didn't get sexual and romantic attention in return. In a year that's seen the release of a Woody Allen film, Louis C.K. return to the stage and Bill Cosby released from prison, the idea of the rebirth of the abuser is a touchy subject. But Adams doesn't seem to want to consider himself in that broader picture and digest his place in the abuser narrative; he just wants us to buy coffee table books of his career and dig his new music. The goal of the #MeToo movement was to use consequences to deter abusers from such harmful behavior; Adams had to learn the hard way.