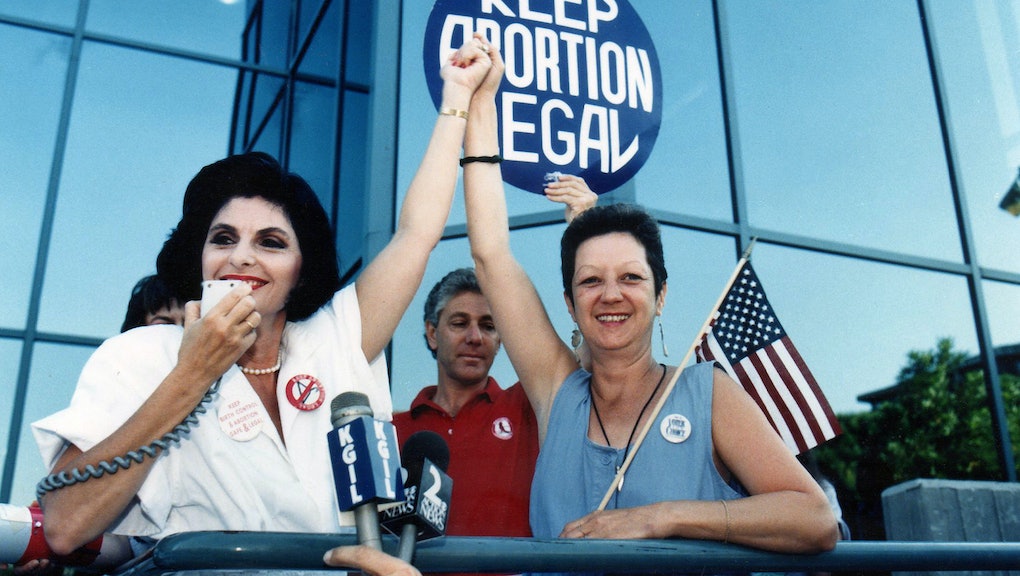 The new documentary AKA Jane Roe contains a shocking confession in its final 20 minutes: Norma McCorvey, better known by her pseudonym “Jane Roe” from the landmark 1973 abortion lawsuit Roe v. Wade, admitted that the anti-abortion crusading of her later years was “all an act” paid for by the Evangelical Christian right.

McCorvey was homeless, pregnant and unable to get a safe or legal abortion in the state of Texas when she became the poster child of the pro-choice fight. Her willingness to share her experience led to Roe v. Wade passing in 1973, legalizing abortion in all 50 states. In the ‘90s, however, McCorvey inexplicably changed her tune, becoming an anti-abortion ex-lesbian born-again Christian, to the glee of the Evangelical right, who used her as a mouthpiece.

AKA Jane Roe director Nick Sweeney interviewed McCorvey for his film in 2017, shortly before her death. “This is my deathbed confession,” she chuckles in the film, sucking oxygen from a tube in a nursing home. McCorvey grew up queer, poor and she was sexually abused by a family member after leaving reform school. Her interview features many end-of-life reflections, including the admission that her pivot to the pro-life camp was “all an act.”

“Did [the evangelicals] use you as a trophy?” Sweeney asks McCorvey in the film.

“Do you think you would say that you used them?” the director asks.

“Well, I think it was a mutual thing,” McCorvey answers. “I took their money and they took me out in front of the cameras and told me what to say. That’s what I’d say.” Then she gives an example of a scripted anti-abortion line. “I’m a good actress,” she notes. “Of course, I’m not acting now.”

At another point in the film, the evangelical leaders who paid McCorvey to renounce her pro-abortion past watch the footage of her confession. They're taken aback in the documentary but easily corroborate her story. "I knew what we were doing," Reverend Rob Schenck admits in the film. "And there were times when I was sure she knew. And I wondered, Is she playing us? What I didn’t have the guts to say was, because I know damn well we’re playing her."