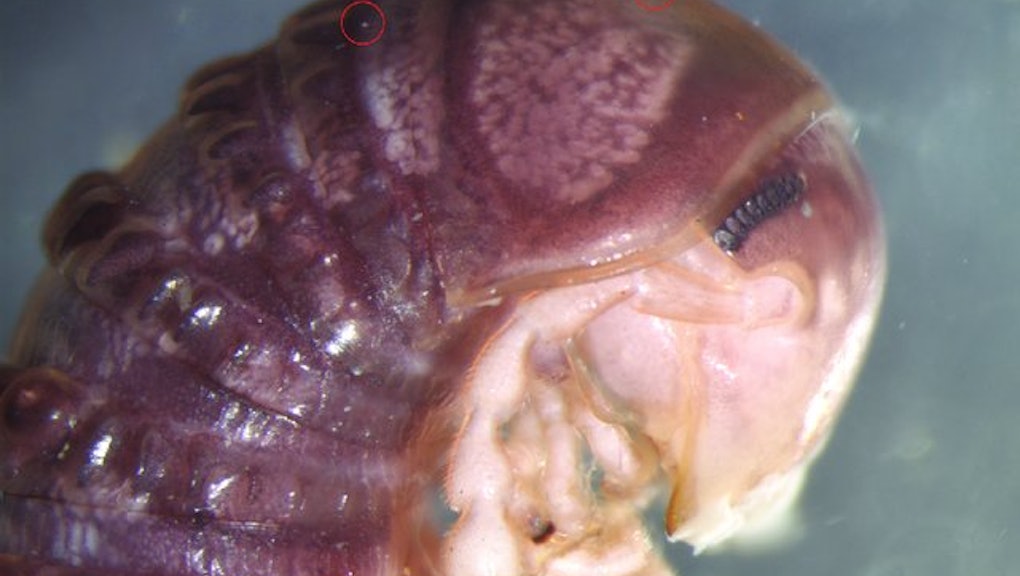 A researcher from the University of Copenhagen's Natural History Museum of Denmark was checking out extreme close-ups of the North American millipede on Twitter (as one does) when she noticed white spots on its carapace. While the specks might look like nothing to most people, to Ana Sofia Reboleira they indicated the presence of a parasitical fungi not seen on this species of millipede before.

Her hunch was correct, and last week the newly discovered parasite was coined Troglomyces twitteri in the fungi-focused journal MycoKeys. It was named in honor of the social platform where it was discovered.

"Until then, these fungi had never been found on American millipedes," Reboleira explained in a U. of Copenhagen press release. "So, I went to my colleague and showed him the image. That's when we ran down to the museum's collections and began digging."

T. twitteri, as it turns out, is a type of parasite that belongs to the Laboulbeniales order of fungi. These species of fungal parasites tend to attach themselves on the outside of hosts, creating one of those horrific images of insects with weird growths all over them. As fungi, one might immediately think of a plant-like organism — but they actually look like small larvae once you put them under the microscope. The 'head' buries into the shell with suction to drain nutrients from its host while the other half sticks up to ready itself for spore spreading.

The fungi tends to root in places where it's easier to send out spores to other hosts, which is why the authors found most of these parasites near the millipedes' genitals. Apparently, millipede sex is "an intimate affair that can resemble human mating, only with a lot more legs," as described by LiveScience, so T. twitteri can end up acting like an STI spread between two partners.

Although there are about 30 species of Laboulbeniales that haunt all sorts of millipedes, Reboleira stated in the press release that there are probably still way more to discover. There's not a lot of research about these particular fungi, including their biology, and she believes learning more about these parasites can help scientists learn more about insects and the parasite/host relationship.

As for T. twitteri, Copenhagen's team insisted that using Twitter as inspiration for the name was not a dig on the nature of the social media platform.

"As far as we know, this is the first time that a new species has been discovered on Twitter," Reboleira explained. "It highlights the importance of these platforms for sharing research — and thereby being able to achieve new results."

Reboleira expressed hope that amateur and professional researchers will become more inclined to share findings through social media thanks to discoveries like this. The importance is particularly significant right now, she noted, as many scientists haven't been able to do their usual lab or field work during the pandemic.