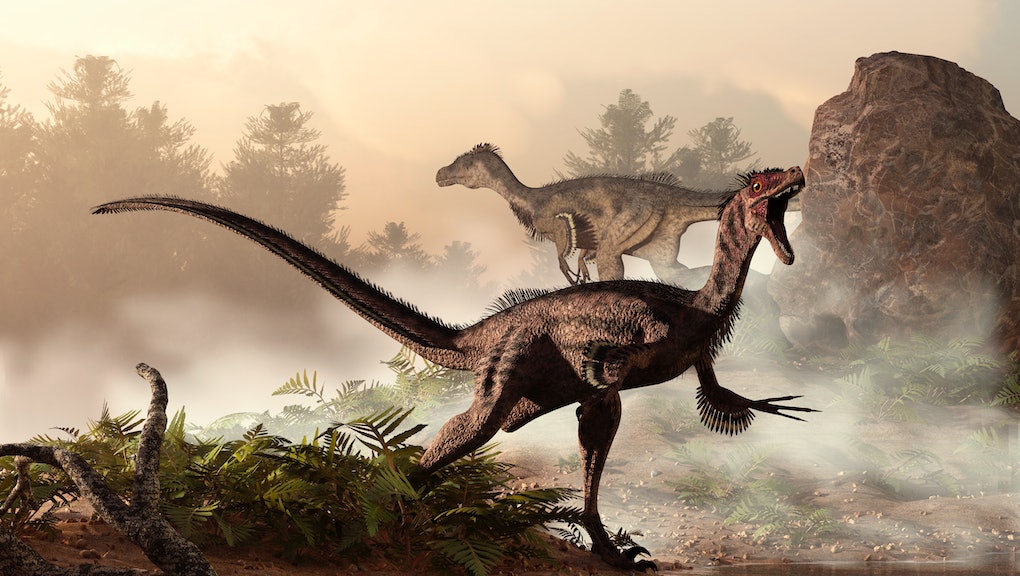 Researchers from the University of Wisconsin-Oshkosh have made a discovery that could crush our fantasy career goals as Jurassic Park raptor trainers. The scientists analyzed the teeth of the velociraptor's close relative, deinonychus antirrhopus, and found evidence that the raptors seldom worked together to hunt prey down in groups. In reality, they say, it's likely raptors were more like Komodo dragons in the sense that they might share a kill but not actually coordinate to bring a victim down.

Deinonychus is the species that the Jurassic Park series used to create its velociraptors. The idea of the raptors hunting in packs first came about by a Yale paleontologist named John Ostrom. He was the man who Michael Crichton contacted for advice on dinosaurs. Later, it was also Ostrom who introduced the theory that dinosaurs were ancestors of birds. While his bird ancestry hypothesis has become more accepted within the paleontology community thanks to continued dinosaur research, his pack-hunting raptor theory hasn't quite endured the same scrutiny.

"Raptorial dinosaurs often are shown as hunting in packs similar to wolves," vertebrate paleontologist Joseph Frederickson, who led the study, told Phys.org. "The evidence for this behavior, however, is not altogether convincing. Since we can't watch these dinosaurs hunt in person, we must use indirect methods to determine their behavior in life."

One way is to look at the dinosaurs' descendants. "The problem with this idea is that living dinosaurs (birds) and their relatives (crocodilians) do not usually hunt in groups and rarely ever hunt prey larger than themselves," Frederickson explained. "Further, behavior like pack hunting does not fossilize so we can't directly test whether the animals actually worked together to hunt prey."

Which took the scientists to the next step: Analyzing the remains of the predators' teeth.

By studying the chemistry of the teeth, the paleontologists were able to get clues about the creatures' diet and water sources. The teeth indicated that the Deinonychus's diet changed from when it was young to when it grew older — meaning its parents didn't likely take care of their young the way pack animals do.

If the raptors were anything like Komodo dragons, the babies could've actually been at risk of being eaten by their own parents. Like other reptiles, they might have sought shelter away from the dangerous adults, eating food that differs from what the adults ate, until they were strong enough to join the mature group. This could be why the teeth indicated two different diets as the Deinonychus aged.

"This is what we would expect for an animal where the parents do not provide food for their young," Frederickson told Phys.org. "We also see the same pattern in the raptors, where the smallest teeth and the large teeth do not have the same average carbon isotope values, indicating they were eating different foods. This means the young were not being fed by the adults, which is why we believe Jurassic Park was wrong about raptor behavior."

A lot of what we know about dinosaurs has changed since the first Jurassic Park novel and movie was released. And, if anything, even more is likely to change in the future. Frederickson added that the method of analyzing the teeth could also be applied to other extinct animals, so who knows — maybe a different species could turn out to be the prehistoric pack hunter we've been looking for.

More like this
"Brood X," a plague-level cicada infestation, is coming for us this spring
By Rafi Schwartz
The Green New Deal is back, baby
By AJ Dellinger
Are electric cars really green?
By AJ Dellinger
Stay up to date