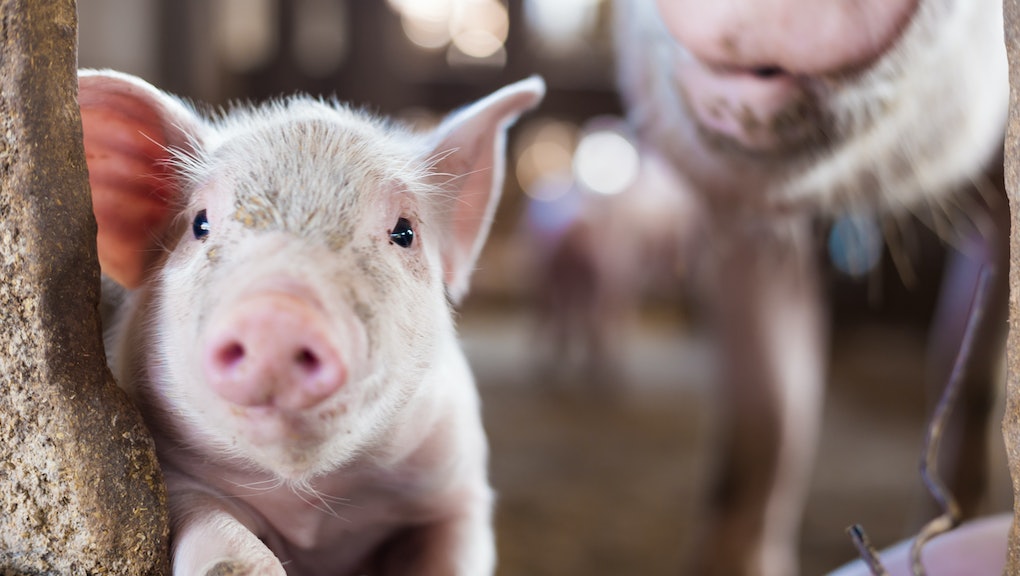 A pig cafe in Tokyo has opened, so you can swine and dine to your heart's content

Japan is giving new meaning to the term “pigging out” after Tokyo recently saw the opening of a coffee shop that serves not just your favorite matcha lattes, but the chance to interact with adorably tiny pigs. The cafe Mipig, located in the Meguro ward of the Japanese city, is a new three-floor, open-space establishment that is meant to be a place “where you can feel relaxed with a lovely micro pig,” as written on the company's website. According to CNN, the pigs featured at the cafe don’t belong to a certain variety — they’re just small, baby pigs that will eventually grow larger in size.

Mipig, which opened in March, was funded through Camp-Fire, the Japanese equivalent of Kickstarter or GoFundMe, reported CNN. While Hooome Co. and SaLaDa Co., the companies behind the cafe, were hoping to raise two million yen to launch the project, they raised nearly five million ($45,000 USD) — clearly, people want their pigs.

Animal cafes are not a new concept, of course, but up until now, they've mostly only involved cats. In recent years, cat cafes have cropped up across the world in countries like the U.S., Denmark, Austria, Canada, Italy, Russia, and France. But as the market for feline-centric coffee shops becomes increasingly saturated, entrepreneurs are looking to stand out from the litter by putting a new, pig-filled twist on the idea.

Hooome Co. and Salada. Co. aren’t the first to have thought of piglets as the perfect playmates, however. In 2015, the Huffington Post reported that a “Pignic” pop-up that offered a swining and dining experience had opened in London for one weekend only to promote mini pig welfare.

It's no wonder that people and companies are gravitating towards pigs. According to the American Mini Pig Association, pigs make excellent pets because they’re incredibly emotionally intelligent; highly motivated by food and thus easy to train; and furless, making them hypoallergenic. CNN notes that pigs are becoming common pets for celebrities in particular, with Ariana Grande adopting the Instagram-famous Piggy Smallz, Paris Hilton getting Princess Pigelette, and Victoria Beckham purchasing two pigs for her husband David.

Thanks to the world's growing interest in pet pig ownership, the companies behind Mipig have established a farm to breed pet pigs that customers want to adopt, according to SBS. At Mipig, animal welfare is clearly a priority; a website policy states that customers are encouraged to thoroughly wash their hands before entering the establishment to avoid infecting the pigs, to wear special slippers inside, and to wash their hands before leaving, as well. Those who are sick, have visited a country with a swine fever outbreak like China in the past two weeks, or who have come into contact with another pig in the last two weeks, will be refused entry to the cafe.

If you can follow those guidelines and want to hang with some tiny pigs next time you're in Tokyo, Mipig is open for business. And if pigs aren't your thing, don't be bummed — Japan is actually full of animal-themed cafes. The Ikefukurou Café offers the opportunity to sip drinks alongside owls; the Tokyo Snake Center is a chance to hang out with (caged) snakes; and ChikuChiku features little hedgehogs lounging in dollhouses and dining at Barbie-sized tables. It seems that in Japan, at least, cat cafes are out and, well, pretty much everything else is in.

More like this
Jaden Smith is opening a restaurant that'll serve free food to homeless people
By Kara Weisenstein
Eating meat is killing people, but not in the way you think
By AJ Dellinger
Riiiiiiight, Ellen DeGeneres is ending her talk show because she's bored
By Kara Weisenstein
Stay up to date