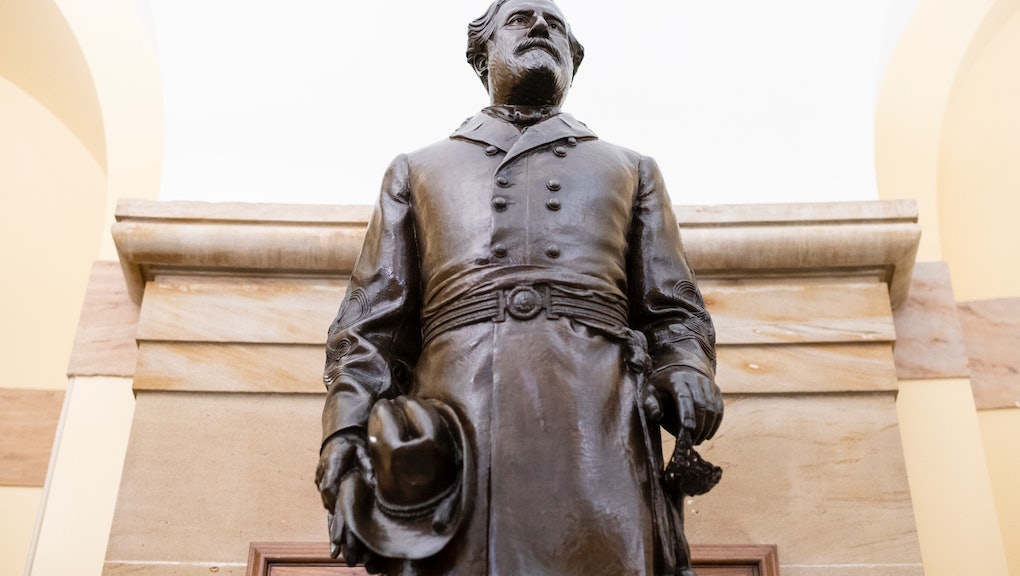 A Robert E. Lee statue was quietly removed from the U.S. Capitol overnight

Following the police killing of George Floyd this spring, statues of Christopher Columbus and Confederate figures became popular targets for protesters. Statues were beheaded, bathed in blood, and overall used as sites to call attention to the horrors embedded within U.S. history. With these monuments standing as physical representations of the same anti-Blackness that killed Floyd and countless others, calls for their removal picked up again. The latest response to these calls was the quiet removal of a statue of Robert E. Lee from the U.S. Capitol overnight Sunday.

The U.S. Capitol is home to the National Statuary Hall, where each state contributes two statues to the collection. Since 1909, a statue of Confederate General Robert E. Lee stood alongside George Washington as Virginia's contributions. To help put that into perspective: Those statues have been around for over 100 years, and both were added long after the Confederacy's defeat.

In July, the issue of Lee's statue was taken up by Virginia's state commission, led by state Sen. Louise Lucas (D). The panel voted unanimously to recommend that it be removed.

"We should all be proud of this important step forward for our Commonwealth and our country," Virginia Gov. Ralph Northam (D) said in a statement. "The Confederacy is a symbol of Virginia’s racist and divisive history, and it is past time we tell our story with images of perseverance, diversity, and inclusion."

Per The Hill, only a representative from Northam's office, Sen. Tim Kaine (D-Va.), and Rep. Jennifer Wexton (D-Va.) were present for the statue's removal. And while the event is certainly welcome, the fact that it was removed in the middle of the night, with the announcement not coming from Northam's office until the next morning, comes off as a little cowardly. If you can display a Confederate monument for over a hundred years, you can be a little louder about removing it.

With Lee gone, Virginia now plans to erect in his place a statue of Barbara Johns, a civil rights activist. Northam said, "I look forward to seeing a trailblazing young woman of color represent Virginia in the U.S. Capitol, where visitors will learn about Barbara Johns’s contributions to America and be empowered to create positive change in their communities just like she did."

Johns got her start organizing at 16, when she led a walkout at Robert Russa Moton High School, the county's school for Black youth, to protest its substandard conditions. Although students first demanded the construction of a new school, Virginia NAACP Attorney Oliver W. Hill agreed to take up their case if they sued for desegregation. The case, Dorothy Davis et al v. County School Board of Prince Edward County, Virginia, ended up getting incorporated into the famous Brown v. Board of Education case.

In a statement, Pelosi said, "The removal of the statue of Robert E. Lee and its forthcoming replacement by a tribute to Barbara Johns, a civil rights pioneer and pride of Virginia, is welcome news. The halls of Congress are the very heart of our democracy, and the statues within the Capitol should embody our highest ideals as Americans."

She continued: "The Congress will continue our work to rid the Capitol of homages to hate, as we fight to end the scourge of racism in our country. There is no room for celebrating the bigotry of the Confederacy in the Capitol or any other place of honor in our country."