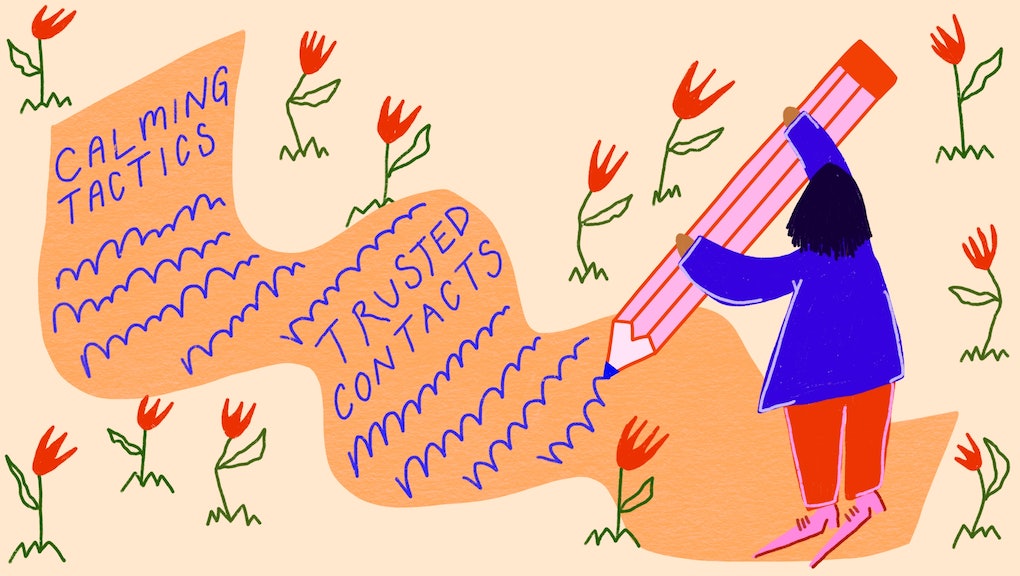 A suicide safety plan saved my life. Here's what it looks like, and why it worked

August 5 of last year started just like any other day. I woke up before dawn to change, feed, and soothe my toddler back to sleep. After that, I slipped into my workout clothes went on a quick run, and then I made breakfast. My kids and I spent that warm Wednesday morning watching TV. But as the day progressed, things quickly changed. My mood, in particular, changed. And by lunch, I was contemplating suicide.

This wasn’t the first time my thoughts had turned dark. I was first diagnosed with depression when I was 17, and one of the defining traits of my illness is suicidal ideation, which means I regularly think about taking my own life.

It’s a complex set of emotions to try and explain, but imagine depression feeling completely all-consuming. When I’m mad — or, more importantly, when someone’s angry at me — I feel like it would be easier to run away and even end my life. When I’m sad, instead of figuring out how to feel better, I want to step in front of traffic. But, for the most part, these thoughts have been manageable. I’ve worked closely with my therapist and psychiatrist to keep the demons at bay.

But all that changed that summer. My mother died in June, in a sudden and extremely traumatic way. I'd also been dealing with a sexual identity reckoning; in March of last year, I disclosed to my husband that I am gay. And on August 5, when the weight of the situation coupled with a pandemic that has no end in sight became too much to bear, I reached out to my psychiatrist. “Today is hard. I’m not okay,” I told him.

We set up a phone session and I told him my intentions to end my life — not the details, exactly, but the intense ideations and the persistent thoughts. I told him I was “tired,” which was a transparent understatement. I felt drained, depleted, and had lost the will to live. I told him I didn’t trust myself, words which shifted our session to one of crisis intervention.

And while I was worried I would be involuntarily committed — thoughts of screaming people in straight jackets flooded my mind — reality looked nothing like the movies. Thankfully, instead of sending the police (or a windowless, white van) to my house, my doctor asked for a suicide safety plan.

A suicide safety plan (also known as a crisis intervention plan) is created by an individual, usually with the help of a mental health professional, that outlines what steps they can and should take when they are in a state of crisis. “This guide outlines specific coping mechanisms a client can use to reduce the likelihood of engaging in harmful behavior,” says Abby Brown, a Chicago-based psychologist. “It also includes a list of red flags one should be on the lookout for, as these markers and signs may lead a client to experience suicidal thoughts and/or engage in other high risk behaviors.”

Unfortunately, I didn’t have one in place. I hadn’t even heard of the term and I didn’t know what such a plan entailed. I was embarrassed and scared, and the notion was overwhelming. But I went ahead and created one anyway.

For 30 minutes that evening, my doctor and I went through every possible circumstance and scenario. We discussed coping strategies and breathing techniques to decompress. And he made me outline — very specifically — how I would handle the next few days.

He didn’t hang up the phone until I rehashed exactly what I would do if I felt the urge to act on my thoughts. He also made me promise to reach out to my support network, which I did as soon as we ended our call. I connected with two close friends immediately. I told them where I was at, mentally, and what I needed. I asked them to check in on me often and was honest about how desperately I needed their support.

It’s a simple concept for people like me, so why didn’t I have an emergency plan in place already? Suicidal ideation shouldn’t be as stigmatized as it is, especially right now, as we climb out of a devastating global crisis. According to the Centers for Disease Control and Prevention, more than 9 million American adults consider suicide each year, and that number increased in 2020. Due to the pandemic, job loss, increased levels of drug and alcohol abuse, physical instability, emotional instability and financial instability, the risk of suicide has increased by .15 percent; and while that number seems small, it equates to 460,000 more people than earlier years.

This number is sobering, but experts tell me that without crisis prevention plans, it'd likely be much worse. Danielle Roeske, a Connecticut-based psychologist, tells Mic that people should create a suicide safety plans when they feel calm and want to be alive. This clear-headedness can help form a plan that will actually work by anticipating roadblocks or intrusive thoughts.

Safety plans can be written out and placed in an easy-to-find spot, typed out in a note on your phone, and implemented at any time. The plan can vary from person to person; it can take many forms and be presented in many different formats, Roeske says. But they all include similar information.

The first thing your plan should outline is triggers and warning signs, i.e. what thoughts or feelings you know you have when you are suicidal. Next should be coping strategies designed specifically for you. As trite as this sounds, meditation, breathing exercises, going for a walk, watching TV, or listening to music can be incredibly grounding.

You also want to include a list of reasons for living. “Those who are suicidal often forget about the positives in their life,” Roeske says. “However, having reasons written out can refocus their attention.” And good safety plans have contact information: for friends, therapists, psychiatrists, and crisis hotlines. My own plan names numerous people I can text, message, or call in order to make me feel better and safer. These are reminders that your network does exist and there are people who want and need you alive.

Make no mistake: My plan is not foolproof. From time to time, I still have suicidal ideations and thoughts. But in August, with my plan and my support system in place, I pulled through a low moment — a dark, near-death moment. And I am fairly confident I will do it again. There is scientific evidence that having a plan reduces the risk of future attempts. It also encourages an ongoing dialogue between a client and their psychologist, psychiatrist, or therapist — which is integral for healing and growth.

That said, the effectiveness of my plan — and any plan — is contingent on my willingness to use it. I cannot thrive or survive if I don’t reach out when I am struggling and tell others when I feel suicidal. But if I can execute my safety plan, it can save me, and help prevent any type of self-harm. I will keep working toward stability. I will fight for my life and my health, and I will revise my plan as many times as it takes because I am worth it, and you are too.

If you or someone you know is struggling with suicidal thoughts, you can call the National Suicide Prevention Lifeline at 800-273-TALK (8255) and/or you can send a message to Crisis Text Line any time, day or night, to immediately speak with a trained crisis counselor.

More like this
Can't bear to be in a relationship right now? Blame de-cuffing season
By Suzannah Weiss
Castor oil for hair growth: Does it actually work?
By Melissa Pandika
TikTokers are demystifying ADHD with truth and just enough levity
By Joseph Lamour
Stay up to date