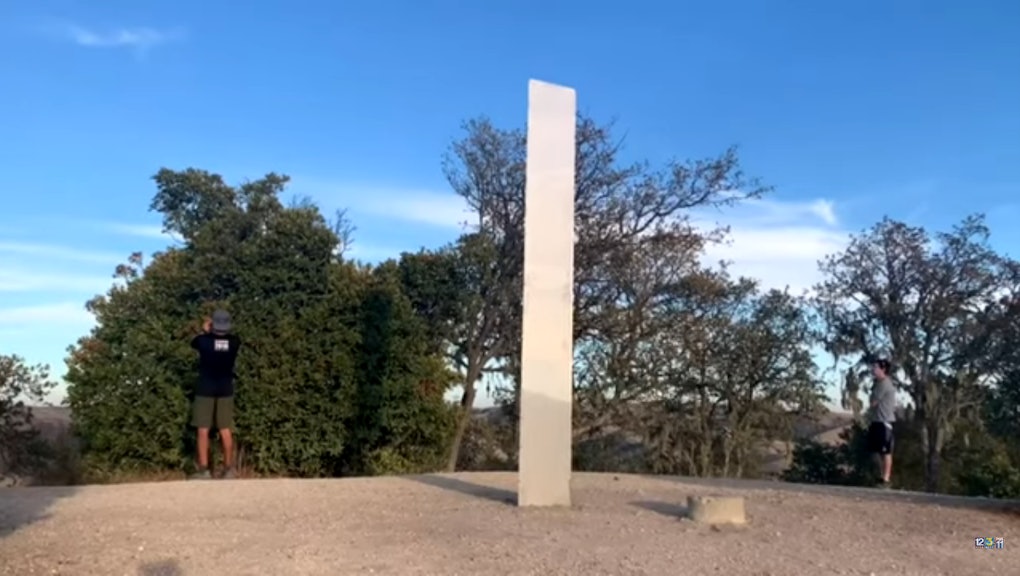 A metallic monolith in California, similar in shape to others found in Utah and Romania, was vandalized Wednesday night by a group of men who chanted "Christ is king" as they knocked it down. In its place, the men erected a plywood cross and tied the monolith up with rope before dragging it down the mountain. The group recorded their efforts in a livestreamed video posted on a site called DLive, according to VICE.

"Christ is king in this country," said one of the men in the video. "We don't want illegal aliens from Mexico or outer space. So let's tear this bitch down, come on."

In a comment to Atascadero News, the deputy city manager said the city had no plans to investigate the incident any further at this time.

The vandalism is a disappointing reminder that people are awful and will ruin everything, even fun jokes about aliens that have connected folks internationally during a time when we're all separated.

The California obelisk was discovered by a group of hikers on Wednesday at the top of a mountain in San Luis Obispo County. According to local news station KEYT, the monolith was three-sided, like the monolith in Utah, but appeared hastily constructed like the one found in Romania. The structure could be reached at the peak of a two-mile hike in a chill area surrounded by shrubbery.

Atascadero News estimated its weight at approximately 200 pounds, but noted it could be knocked over with a good push. That's exactly what the vandals did, shoving it back and forth before getting it loose enough to fall.

The young men in the video claimed they drove over five hours to get to the monolith's location. Their conversations were peppered with racist comments and talk about white power. They sang military songs, such as "Battle Hymn of the Republic" while wearing fatigues, combat helmets, and a "Make America Great Again" headband.

They called the monolith "gay" and other names in an apparent attempt to hurt an inanimate object's feelings. Later in the video, the group appear to have been caught by other people who pursue them. The men hid and began discussing whether the other people were with the antifa movement. They went into wannabe-soldier mode, using military terms to dream up a plan where they would call the police and blame the vandalism on their pursuers.

In the end, they did nothing. But they sure bragged like they did something.