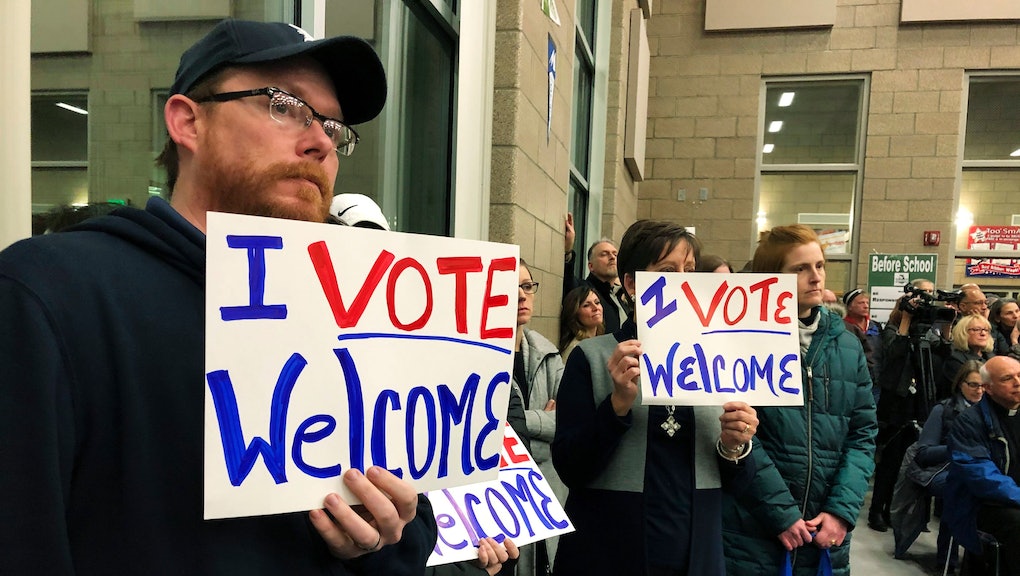 A Trump rule allowed this North Dakota county to deny refugees. They declined

The great national debates of the Trump era are playing out in miniature across America. Case in point: On Monday, the Burleigh County Commission held a contentious vote in Bismarck, North Dakota, on whether to continue allowing refugees to be resettled within its borders. The vote comes on the heels of an executive order from September in which President Trump required that state and local governments provide consent before they’re made to accept refugees. On Monday night, the commission held a hearing attended by a standing room-only crowd of more than 500 people, per The Washington Post. They packed into a cafeteria and listened to hours of conflicting, impassioned testimony from both people with deep family roots in North Dakota and recent refugees from countries like Cameroon. The vote could have made Burleigh County the first in America to stop accepting refugees.

Some people who spoke out against allowing refugees cited concerns about financially supporting them. “I’ve heard that most of the refugees coming in are women and children, and I understand that they need an education and to learn to speak English,” said a man who described himself as a sixth-generation North Dakotan, according to the Post. “But we need to think about our kids here, too, before we start worrying about somebody else’s.”

Prominent local officials also opposed allowing refugees to continue settling in Burleigh. “We have burgeoning school enrollment, veterans’ needs, homeless needs, and Native American needs,” Bismarck Mayor Steve Bakken (R) told The Associated Press. “This isn’t about heartstrings, this is about purse strings.” Brian Bitner, the chairman of the Burleigh County Commission, told AP that most of his constituents opposed allowing refugees. “The overwhelming public opinion is so clear to me, that I think if you vote for it, you’re not going to be re-elected if you choose to run again," he said. He voted against accepting refugees.

The hearing also featured heartwrenching testimony from refugees themselves. “Since I arrived in this country, I felt like I finally found a home,” a college student from the Congo told the audience. But his faith in the U.S. was shaken by people criticizing refugees for being a financial burden. “I started asking myself many questions, trying to figure out where I actually belong.”

"There is room in the Burleigh County Inn."

In a statement Monday, North Dakota Gov. Doug Burgum (R) indicated that he would allow refugees to be accepted in the state, writing that he possessed “serious concerns that denying resettlement to a handful of well-vetted and often family-connected refugees would send a negative signal beyond our borders at a time when North Dakota is facing a severe workforce shortage and trying to attract capital and talent to our state.”

That sentiment was shared by the majority of the commission. Reached for comment by Mic, Burleigh County Commissioner Mark Armstrong provided a copy of his written remarks that were distributed Monday’s hearing. (Armstrong was out of town but voted via telephone in favor of resettling the refugees.) He wrote passionately about the Christian imperative to help those in need.

“I have read all of the emails, letters, and messages. Emotions run high, some people are fearful, and some are angry. A lot of rhetoric and misleading information has filled the social media world,” he wrote.

”One interesting theme from the emails was the scores of Christian pastors, preachers, and leaders of our community that are encouraging their members to be a welcoming community and reach out to these human beings seeking a new home, a new life, and new friends,” Armstrong wrote. He made an explicitly religious plea, reminding city residents that “we are in the Advent season, which brings us to Christmas and then that refugee story when Joseph fled King Herod’s persecution with Mary and the baby Jesus to Egypt. ... There is room in the Burleigh County Inn.”

Armstrong’s remarks also challenged his constituents to really consider the county’s responsibility to help refugees. Rather than buy into the usual narrative that refugee resettlement is a burden, Armstrong wrote, “the single most important factor in refugee resettlement is a community that helps them. It doesn’t mean we cannot help others in our community who also need help. As one emailer said, ‘They are seeking what we all have in abundance: security, a community of good and welcoming people, education for their children, religious liberty, opportunity, and freedom.'"

Ultimately, the five-person commission voted in favor of continuing refugee resettlement by a 3-2 margin. This decision does not mean that much will change in Burleigh County on a substantive level — in 2019, the county of 95,000 people accepted only 24 refugees, amid drastic cuts in the number of refugees allowed into the country by the Trump administration. The measure that the council passed puts next year’s cap at 25.

While it’s unfortunate that we’ve reached a point where local politicians must agitate fiercely and passionately for even a tiny number of refugees to be resettled in their region, Monday’s vote in North Dakota strikes a strong symbolic note of hope — just in time for the holidays, as Armstrong said.

More like this
Tucker Carlson is now spouting the talking points of racist mass murderers
By Rafi Schwartz
It appears once again that the Democrats are willing to tank their whole agenda because of "rules"
By Rafi Schwartz
Oops, the Arizona recount the MAGA crew demanded actually took votes away from Trump
By Rafi Schwartz
Stay up to date