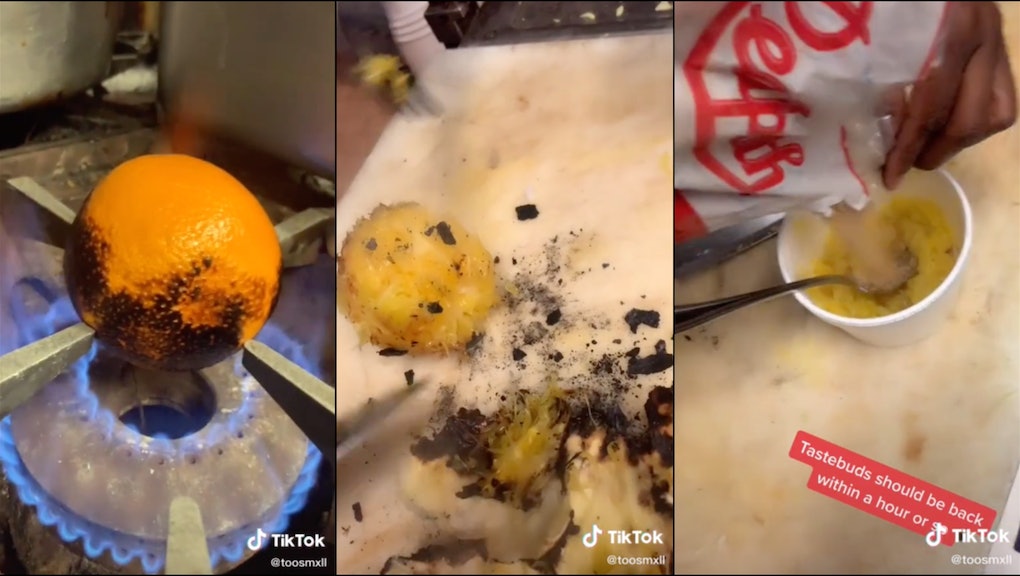 It’s usually a bad idea to take health advice from people on social media. But the “burned orange” trick making the rounds on TikTok seems like a pretty harmless exception. The homespun remedy is meant to help people regain their senses of taste and smell after having COVID-19. (One expert estimates that those experiencing compromised senses of smell post-coronavirus includes roughly 20 percent of sufferers.) And while it doesn’t seem to work for everybody, some folks swear the hot, pulpy concoction is a miracle cure — for enjoying food again, anyhow.

Here’s how it works: You burn the skin of an orange over an open flame until it is entirely black. Then you peel it and mash up the hot fruit in a bowl with some brown sugar. Then you eat it, and voilà, the sweet citrus is supposed to help restore your senses. Kemar Gary Lalor, a 23-year-old architecture student in Toronto, got the unconventional remedy from his mother, who had COVID-19 and lost her sense of smell and taste. When she was able to regain them quickly, within a day or two of recovering, Lalor asked how she did it and she showed him "the remedy that her mom used to give to her in Jamaica as a child," he told Buzzfeed News. (He did not specify what the remedy was used for, pre-COVID-19 times.)

Lalor suspects he had COVID-19, too. (He was never tested.) But when the burned orange trick helped restore his dulled senses as well, he did the thoughtful thing and shared the remedy with the masses.

In early December, Lalor posted a tutorial on TikTok and people immediately started trying it out and giving him feedback. Some gushed about how much it helped them. Others tweaked the recipe to try and make it more effective. "My mom and I were only too happy to continue helping everyone during this difficult time," Lalor told BuzzFeed News.

Even some doctors are saying there’s a chance the burned orange legitimately helps. Karan Rajan, a surgeon in the UK, tested the recipe on his own TikTok and mused that the amplified smell and taste of the charred fruit might function as a sort of therapy for your senses, which he dubbed “olfactory training.”

But experts are split on whether smell training (which usually entails putting four essential oils in jars and sniffing them multiple times a day) really works.

“People often don’t know how much smell they lost, so if they do something that’s really intense, like burning an orange peel, that will give you an extraordinary sensation, you may have already had an ability," Pamela Dalton, a researcher at the Monell Chemical Senses Center in Philadelphia, told NBC’s Today back in December. "There’s a huge suggestibility factor."

Robert Oliverio, a chief medical officer at Roper St. Francis Healthcare in Charleston, SC, also did not buy into the hype. “I mean, it sounds delicious,” he said in an interview with Live 5 News. “But, scientifically, I'm sorry — there’s really no basis for that.”

Ultimately, there’s just not enough data about the issue — before COVID-19, losing the ability to smell or taste from a virus was super rare. In other words, like with so many other aspects of the pandemic, we’re in uncharted waters here. So go ahead, roast yourself an orange if you’re recovering from COVID-19. Worst case scenario, you’ll have ingested a healthy serving of vitamin C.

More like this
What is sploshing, the food fetish that's taking over TikTok?
By Melissa Pandika
Delta might be the last COVID nightmare variant we get
By Ian Kumamoto
Studies suggest that Pfizer is no longer the cooler vaccine
By Ian Kumamoto
Stay up to date