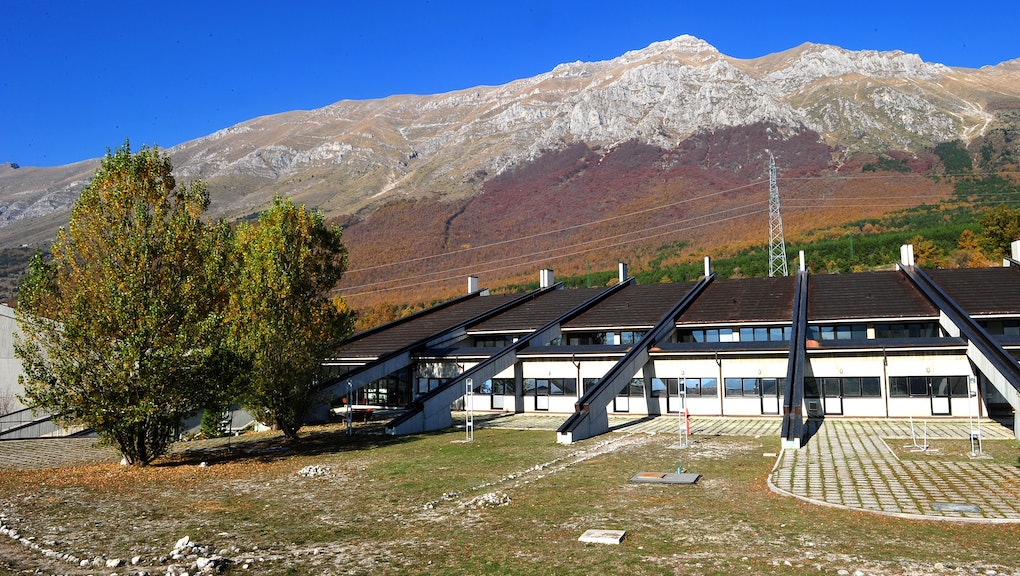 Dark matter sounds like a phrase you'd hear in a sci-fi film to refer to something dark and goopy and maybe dangerous to touch. In reality, it's a theoretical material that's invisible to our eyes but scientists believe makes up a large part of the universe. Although we can't see it, researchers think it exists because of the way other objects react around it — how stars in different locations within spiral galaxies move at the same velocity, for example, or how gasses in other galaxies act as if there's more mass around them than can be seen. Theories on dark matter have floated around since the early 1900s, and on Wednesday, a multinational team of 163 scientists called the Xenon Collaboration announced they have made unusual observations in a dark matter experiment that could either be the exciting discovery of a new particle or concrete evidence of a material that could unlock some of the biggest mysteries about our universe.

The observations come from one of the world's largest and most expensive Xenon experiments, which seek to detect dark matter. The laboratory housing the experiment, located underground in Italy's Gran Sasso mountain, picked up signals that caught the eye of its scientists. The unusual pings could indicate a number of things: An axion, a particle that theoretically makes up dark matter; a neutrino, mysterious particles that carry no electric charge and zip through the cosmos; or tritium, a radioactive form of hydrogen that would indicate the experiment was contaminated.

With the source of the strange pings still up in the air, members of the Xenon Collaboration have been hesitant to declare it as a new find.

"We want to be very clear that all we are reporting is observation of an excess (a fairly significant one) and not a discovery of any kind," wrote team member Evan Shockley in an email to The New York Times.

But it's difficult to stay calm about the signals. If they turn out to be indicators of axions, then it could be a big step towards confirming the existence of dark matter. The axions detected wouldn't likely be dark matter axions, they might actually come from solar energy instead, but their existence would mean other types of axions might also exist. Neutrinos would be another exciting possibility, since their detection would mean they're having a magnetic moment — something they're not supposed to have due to their lack of electric charge. A magnetic moment would mean a new bunch of physics research to be explored.

Tritium contamination would be the most disappointing possibility, as that would mean these signals could be something future experiments have to keep in mind as 'background noise,' or recalibrate their equipment to ignore such pings.

The Xenon Collaboration experiment, like many other laboratories around the world, was nearly delayed during its assembly due to pandemic-related lockdowns. Once the team quickly got the equipment set up, they were able to conduct experiments remotely from their homes. Now, they plan to conduct another experiment in the hopes of collecting more sensitive data by the end of this year (if the pandemic will let them).

If the strange pings they found are actual, real indicators of something, they expect to find it within one to two months of restarting. Until then, the source of these signals is still a tantalizing mystery that will keep physicists on the edge of their seats in suspense.

More like this
Brood X is here, but I'm okay with it actually
By Rafi Schwartz
Worm composting: A beginner's guide
By AJ Dellinger
The ethics of solar power are more complicated than you think
By Vanessa Taylor
Stay up to date