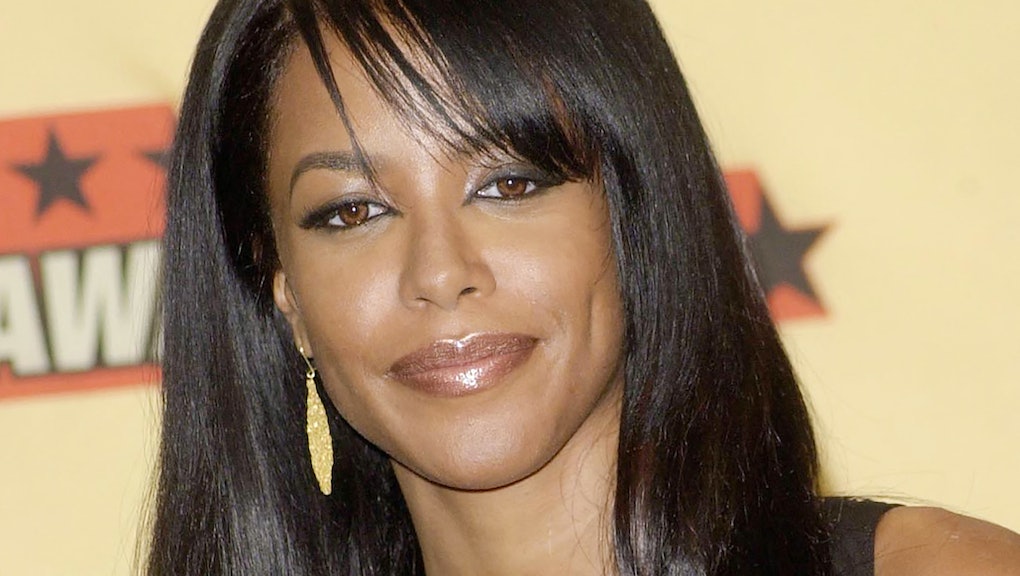 The sudden death of 22-year-old singer and actress Aaliyah Houghton on August 25, 2001 garnered loads of memoriams for the tragic loss of one of entertainment’s most promising stars. Fans gathered for a candlelight vigil, created makeshift memorial sites, and left flowers at her grave. Posthumous music videos for “More Than a Woman,” “Rock the Boat,” and “I Care 4 U” left touching notes to her memory and corralled her family and friends, TV specials honored her life, and a compilation album of old and unreleased tracks released in December 2002.

But as time filled the space since her passing, another trend began to emerge.

Though Aaliyah’s official website was used after her death to share old home videos, rare childhood photos, audio snippets and merch, updates decreased after the mid 2000s. It then mostly became a hub for one-off updates from her estate, with years of dormancy until a major renovation in 2017. And various business issues and lawsuits around her recording home Blackground Records, which was run by her uncle Barry Hankerson, led to losing its distribution deal — making it difficult for fans to easily acquire physical copies of her music.

As information dwindled from the singer’s official channels, a dense network of Aaliyah fan sites emerged to fill the information gap and offer a community for those still enthralled by her powerful legacy.

Fan sites became a growing piece of artists’ fan communities in the mid-90s and the dot-com era, initially surfacing as rudimentary web pages, online forums, and message boards. But by the mid 2000s, social media had created a new space for music communities to connect globally. Aaliyah’s devoted group of fans launched websites, Facebook groups, social media accounts on Instagram, Tumblr, and Pinterest to share photos, old press clippings, updates on the status of her music catalog, and questions surrounding rumored and confirmed collaborations with her estate.

Accounts such as Aaliyah Archives, Remembering Aaliyah, Aaliyah Always and Aaliyah Legion have become staples when it comes to surfacing, documenting, and archiving information on Aaliyah’s life and artistry.

Aaliyah Archives founder Sandy — who goes by only her first name for privacy purposes — first launched her site in 2013 as a personal blog, and decided to expand it as she realized the breadth of photos and other content that she had amassed. The Aaliyah Archives Twitter page, Instagram page and website have since grown to become go-to spaces for the Aaliyah fan community.

“I initially just did it as a side hobby, just a labor of love and for Baby Girl. I didn’t really think anything was gonna come from it. It’s just something that’s grown organically,” Sandy told Mic, adding that she doesn’t sell ads. “...There was something about [Aaliyah] which was unique and different. She just had it. As fans, we need to showcase that to remind people [of her full impact]. It's about sharing that love and joy of the same artist who we have that connection with.”

Sharing photos, videos and other exclusive or rarely seen visual content is a key piece of the work these sites do each day. But over the past decade, they’ve also focused heavily on organizing around the fight to get Aaliyah’s music pushed to streaming outlets. This included launching a social media campaign with the hashtag #FreeAaliyahMusic back in early 2020 to get her songs released on streaming services.

In August 2021, the elusive Hankerson revealed a major update: he was relaunching his label as Blackground 2.0, and he’d entered a partnership with music company EMPIRE, meaning Aaliyah’s albums and 17 other Blackground albums would finally arrive on streaming outlets through a schedule of staggered release dates. First up: Aaliyah’s sophomore album One in a Million on August 20. Her self-titled third LP will hit services on Sept. 10.

For Sandy, the announcement was a welcome close to one of the more frustrating chapters in the quest to keep Aaliyah’s memory alive. The presence of her final two albums on streaming services offers new listeners access to engage with her music, and the community of Aaliyah fans yet another resource to share her story.

As someone who grew up when CDs and cassettes were still the main music formats, Sandy still has access to her physical copies of Aaliyah’s albums and easily understands how to listen to them. But as Gen Z joined the ranks of Aaliyah fans, Sandy says she took on the responsibility of talking those younger fans through their options to obtain physical copies of Aaliyah’s music and digitize them for their personal use.

“I had fans telling me, ‘How do I get this? Where do you get this CD from? How do I export the music onto my iTunes?’ A lot of the younger fans, they didn't know how to do that,” Sandy said.

Since the announcement, she said, she’s received fewer of those requests — giving her additional time to focus more on the day-to-day operations of her site and “archive bits here and there.”

Producer and songwriter Craig King, who produced several tracks on One in a Million, credits fan pages for continuing to give the music a voice — even when it hasn’t been easily accessible to them.

“It’s hard to know [what role fan sites played in the streaming release] because I’m not on the inside of the label or management team, but if I could guess, I’m sure they played a huge role,” King said. “... Honestly, they have been the only lifeline I’ve seen that’s protected, defended, and uplifted her through the last two decades.”

Beyond their focus on her music, the sites also detail the full extent of Aaliyah’s gifts and impact as an entertainer. Each site has its own focus and vantage point, so the network provides a well-rounded look into the singer’s public persona, career successes and intriguing aura that still has a hold on pop culture decades later.

Aaliyah Always curates a mix of fan art, Aaliyah photos, and old press clips weekly on Tumblr blog, along with featuring a calendar of upcoming events related to Aaliyah. Twitter page Aaliyah Charts largely focuses on sharing stats and facts about Aaliyah’s and updates on the recent chart performance of her work.

Aaliyah Archives has a detailed timeline on its site that gives the full scope of her work as a singer, actor, and creative. These life and career details can regularly be overlooked in the conversations surrounding Aaliyah's influence — with her industry impact being regularly diminished to focus largely on her influence on fashion, style and beauty trends.

The sites’ creators spend hours rounding up new images to post, researching leads sent to them from members of the fan community about topics related to Aaliyah and her estate, and piecing together short video montages of Aaliyah clips and images. Sandy says maintaining a fan site is harder work than many realize.

“It's a huge responsibility on my shoulders. I've been keeping it going for so long. It's been over eight years now,” Sandy says. “There's a lot of fans saying, ‘don't get rid of this site ever. We need this.’ It can be difficult because I do get a lot of that backlash and hate and trolls. But I think I'm quite strong enough to handle it. I'll just catch a block, keep it moving.”

They’ve also played a role in supporting, sourcing and engaging with the creative contributors to Aaliyah’s projects over career — including the multiple producers and writers on her albums, her stylist Derek Lee, and her late makeup artist Eric Ferrell, who passed away in late 2020. Journalist and author Kathy Iandoli also credited Sandy with helping her track down a source for her new Aaliyah biography Baby Girl: Better Known as Aaliyah.

“I think we have collectively cried on each other’s shoulders. I feel their energy, honesty, and curiosity. They honestly feel like a family to me at this point,” said King. “They tag me in their posts, they inbox me quite often, they ask me all kinds of questions about Aaliyah and her family. They’re actually the ones that told me I had a record out in Japan that I didn’t even know about. Honestly, they’re just great.”

For all their interconnectedness, Aaliyah’s fan sites have also been the grounds for some dissension — largely due the generation gap that has emerged between Aaliyah fans that grew up engaging with her artistry while she was still alive and those who came into the fandom following her death. It gets even more complicated when it comes to conversations regarding the tension between her estate and Blackground Records; the former released a statement as recently as early August that alludes to a lack of transparency around the streaming deal.

“As a fan, it's a bit conflicting. You want to support the family and everything but at the same time, the music's there,” Sandy said. “...As unfortunate as it is, I just hope that both the family and Barry Hankerson can come to some sort of resolution where they can come together for the sake of Baby Girl — because that's what it is really about.”

Until then, though, Sandy says fan sites will continue their work to represent Aaliyah and make space to memorialize the pioneering talent lost two decades ago.

“I feel like the fans as a whole, from the OGs, the older generation from my time, up to even some of the younger fans in their mid-20s and even younger fans in their early 20s and teens, were the ones who have kind of laid that foundation [of honoring Aaliyah’s memory online],” Sandy said. “As an older fan, that's what you want. You want that legacy to pass down to younger generations.”