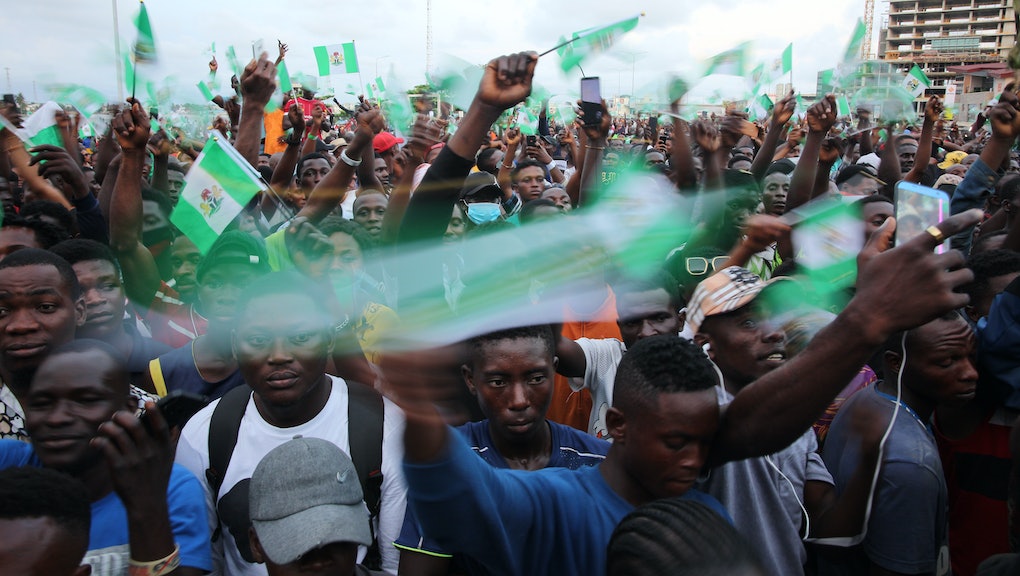 After the #EndSars protests, nothing in Nigeria will be the same

October 20, 2020, is a date that will forever be etched into the minds of Nigerians both at home and abroad. As the governor of Lagos state announced a 24-hour curfew that would begin at 4 p.m via Twitter, protesters barely had four hours to get back home in the notoriously congested city. As people scrambled, government officials allegedly cut security cameras and turned off the lights at the Lekki tollgate, leaving protesters in darkness. These protesters, from different parts of Lagos, unable to make their way home, sat on the ground, waving their flags, singing the national anthem — waiting peacefully for what would come next. In videos that would later become viral, we see soldiers approach the tollgate, shooting directly into the crowd. These were not warning shots.

In one video, you can hear a young man’s voice as he breaks into tears while singing the national anthem, gunshots can be heard in the background. Over 100,000 people watched a live Instagram stream made by a popular disc jockey, DJ Switch. The stream showed as protesters struggled and failed to save a young man who had been shot, performing an elementary bullet removal surgery with their mobile phones. We watched murder live, and we have never been the same.

What inspired the protests in the first place was a decades-long reign by an arm of the Nigerian Police Force that, beyond the carnage of October 20th, has managed to gain a reputation of doing more harm than good. In 1992, the Nigerian government formed the Special Anti-Robbery Squad (SARS), a tactical undercover unit of the Police Force tasked with covertly handling cases of violent crime — everything from kidnapping to armed robbery. The unit was formed during a period of rising crime in the continent’s most populous nation but quickly came to represent the very type of behavior it was designed to snuff out. Over the years, SARS has morphed into a moneymaking trigger-happy squad that has been known to terrorize Nigerians. They arbitrarily arrest and extort young people with impunity for non-crimes like having an iPhone or laptop, driving a nice car, having tattoos or dreadlocks, looking queer or dressing “indecently.”

In 2016, I was arrested by SARS officers during a raid at my university. I vividly remember being greeted by an assault rifle pointed at my face on a Saturday morning, after opening the door of my apartment at the University of Nigeria, Nsukka. Without explanation, I was bundled into the back of a truck with other students and driven by armed men without uniforms to a discreet location where we were thrown into a makeshift cell. They accused us of cultism and threatened to “kill and dispose of our bodies” unless we paid a large sum of money. After 12 hours in that cell, I was bailed out by a friend who had heard about my situation. We would later learn that the raid on our building was just one of many random raids the unit had carried out that year in a bid to extort money from students.

In response to years of public outcry over SARS misdeeds, the Nigerian government has announced so-called reforms that resulted in little or no change. By October of this year, it became clear that the relationship between the Nigerian government, the police, and the people, perpetually mired in a never-ending cycle of uneasiness, distrust, and lethal hostility, had finally reached its tipping point.

Since the protests started, Nigerians and the world at large have watched as state agents attack and beat up peaceful protesters. Young people have been unlawfully detained and in some cases killed by the Nigerian police. Following the initial wave of protests, President Muhammadu Buhari announced the dissolution of SARS, replacing it with the Special Weapons and Tactics (SWAT) unit, which many Nigerians viewed as merely renaming the unit and not actually ending it. I remember seeing a placard from one of the protesters which read: “Emma na thief, you change his name to Joe. E mean say Emma no go thief again?” which loosely translates to “a thief is still a thief even if he changes his name”.

Motivated by a torrent of visual evidence — including footage of the SARS officers killing people in different states, growing accounts of harassment and extortion shared on social media, and the brutal killing of a protest bystander, Jimoh Isiaq in Oyo state, young Nigerians, including myself, stepped out to protest against police brutality that had become our reality. I felt I was familiar with the ebbs and flows of a typical protest since I’d participated in the #OccupyNigeria protest of 2012, and more recently, the #AbujaPoliceRaidOnWomen of 2019, but nothing prepared me for the events that would occur that week.

Our protest was peaceful. Starting at the popular Unity Fountain in Central Abuja. we marched with the ubiquitous “End SARS” mantra slapped on placards as we made our way to the Nigerian Police Headquarters. Soon, not far into our journey, we were cordoned off by a wall of armed policemen and about three tankers. To show that we were unarmed and also to reiterate that this was a peaceful protest, we all got on our knees, raised our hands, and proceeded to sing the national anthem.

But, in an instant, everything changed.

For reasons I still don’t understand, the police suddenly began hosing down and throwing cans of tear gas into the crowd of protesters. I remember two things — the impact of the water pushing me to the ground, and the burning sensation in my eyes that felt as if my face had been dipped in hot sauce. It wasn’t long before chaos ensued as these men, sworn to protect us, began chasing us with guns and canes. When people ask what my biggest fear was, my mind almost never thinks of the pain of death, instead, it wanders off to the dreaded feeling of an unfulfilled life: the ideas to be attended to later, the plans made with an almost disrespectful certainty that we will always see the next day, and opportunities missed for fear of failing.

By October of this year, it became clear that the relationship between the Nigerian government, the police, and the people, perpetually mired in a never-ending cycle of uneasiness, distrust, and lethal hostility, had finally reached its tipping point.

As I ran alongside more than 200 protesters, with the sound of gunshots echoing around me and other protesters being shoved and attacked with canes, all I could think about were the people who never made it home to their families or their dreams.

Through all of this, protesters persisted. Learning from the mistakes of the generation before us, these protests remained decentralized and without assigned leadership. We leveraged the power of social media and a combination of individual efforts to amplify our message. From donations made by Fintech companies to media coverage by youth-centric platforms like Zikoko and Native magazines, Nigerian youths had no choice but to rise to the occasion. One group that efficiently galvanized the movement despite opposition from the government is the Feminist Coalition, a group set up by young Nigerian feminists, that over the past two weeks coordinated the collection and disbursement of funds used in providing legal aid to arrested protesters, medical assistance to the injured, feeding and sanitary supplies, as well as financial assistance to families experiencing loss.

I survived protests on five different days, but Jimoh Isiaq and countless others couldn’t make it back home. And while the protests might be on hold for now, this is the beginning of a revolution because, for once, we are all wide awake and we are all committed to demanding better from our leaders and ourselves.