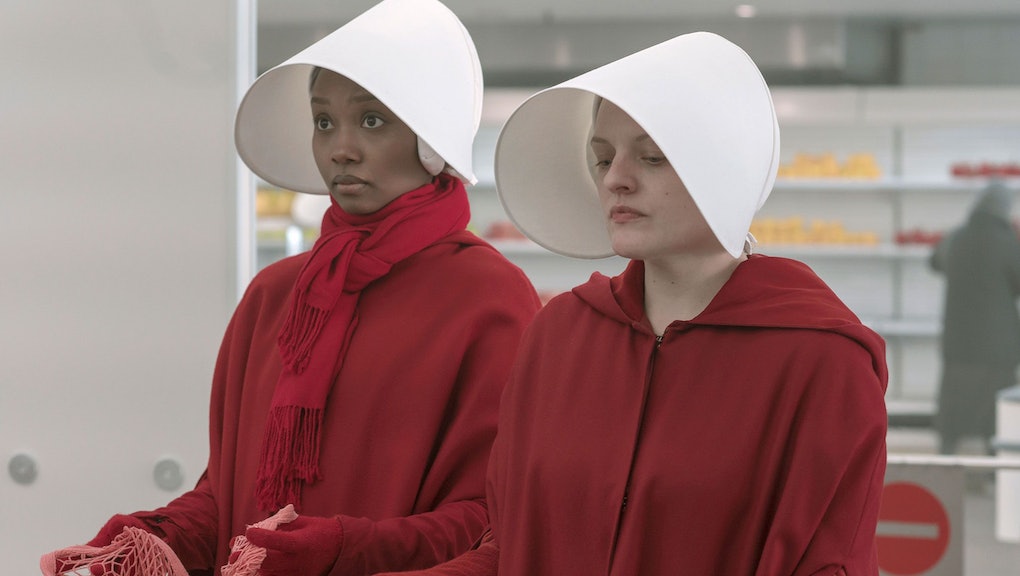 In Margaret Atwood’s 1985 novel, The Handmaid’s Tale, people of color are sent to labor camps in the Colonies, condemned to toil off-page until they eventually die of radiation poisoning. All of the characters featured in its pages, both good and bad, are white.

In Hulu’s television adaption, the decision was made to erase this part of Atwood’s world building, allowing for a more diverse cast. Watching the pilot in 2017, I felt a moment of pleasant surprise paired with sinking dread when I realized that protagonist Offred’s (Elizabeth Moss) husband, Luke (O-T Fagbenle), was Black and that their daughter was biracial. At the time, the decision to make Offred part of an interracial family felt like it would allow the series to travel beyond the all-white perspective of the book, offering a more nuanced look at how Gilead’s stringent system of control and oppression might take different forms for people of varying races and backgrounds. Perhaps this version of the story wouldn’t limit its searing social and political commentary to issues of gender but would go beyond that, exploring the many ways in which race impacts privilege and oppression in America, and by extension, Gilead.

But three seasons in, it’s evident that this sort of intersectional interrogation was never the intent of the reimagined Handmaid’s Tale, which presents Gilead as a bizarrely post-racial society. In a season one interview, series creator Bruce Miller explained that, even with a more diverse cast, he didn’t think racism would have much of a role to play in his version of Gilead, telling TV Guide, “If the fertility rate had fallen 95 percent, all the sudden I think there would be prejudices that people were willing to let go. And that would have happened before Gilead.”

Under Gilead’s fundamentalist regime, race doesn’t factor into its inhabitants’ experiences, despite the show’s frequent inclusion of racially charged imagery, such as the bodies that are often left hanging for all to see, echoing America’s dark history of public lynchings. The world of the show is populated with Black, Asian, and Latinx actors across all social classes, including Commanders and their wives, and all races seem to be elevated or oppressed equally. “Once you decide it’s going to be a diverse world,” Miller told ThinkProgress, “it doesn’t change the story.”

Indeed, the first season of The Handmaid’s Tale doesn’t divert much from its source material, despite diversifying the races of its characters. Luke is still shot, and Offred — whose real name is June — presumes he has died (later, in a welcome deviation from the book, he is revealed to have survived). Moira (Samira Wiley) still tries to escape, only to be caught and forced to work as a prostitute in a brothel called Jezebel’s. The show makes no attempt to unpack the loaded imagery of a Black man being hunted like an animal by law enforcement and demonstrates no awareness of the harmful tropes it’s playing into by making the sole Black woman in its leading cast a prostitute.

“It just felt like in a world where birth rates have fallen so precipitously, fertility would trump everything,” Miller said again in an interview with TIME, attempting to explain why diverse casting wouldn’t affect the narrative of the show. But the problem with Miller’s approach, and with the largely colorblind dystopia of Gilead, is that it has its origins in this world. Not only do many of Gilead’s worst practices have roots in American slavery, but the audience watching each episode has to live in a world where race does indeed change the story for people of color. Implying that diversity begins and ends at casting ignores the intersectionality of its characters’ experiences, and the lived reality of its audience.

Perhaps the most jarring example of The Handmaid’s Tale’s colorblind storytelling comes in season three when June receives a new walking partner (Ashleigh LaThrop), a Black woman known to her only as Ofmatthew. (Her real name, we learn much later, is Natalie). June dismisses Natalie as pious and untrustworthy, even though you’d think, after her experiences with previous walking partners, she’d be inclined to give other Handmaids the benefit of the doubt. True, Natalie parrots many of Gilead’s talking points, and gives every indication that she buys into its rigid theology, but she’s also already been forced to give up three babies to Gilead, and is pregnant with a fourth. June knows all too well what it feels like to have her children used as leverage against her, yet the thought that Natalie could be manipulated in a similar way never crosses her mind.

Under Gilead’s fundamentalist regime, race doesn’t factor into its inhabitants’ experiences, despite the show’s frequent inclusion of racially charged imagery.

Further, although June’s daughter, Hannah (Jordana Blake), is biracial, it never occurs to June that race may factor into the types and degrees of horrors Gilead’s inhabitants may be forced to endure. In one scene, Aunt Lydia (Ann Dowd) mentions that placement options for Ofmatthew are limited, since some Commanders aren’t willing to accept a Handmaid of color. This could be a glimpse into why Natalie is such a model citizen; with fewer households willing to take her in, she can’t afford to be rejected by her assigned family, since there may not be anywhere else for her to go.

June’s issues with Natalie come to a head when June’s single-minded determination to see Hannah gets another Black woman killed. This is not the first Black person to die because of June — in season two, she persuaded a man named Omar (Yahya Abdul-Mateen II) to hide her in his home, and he was hanged for it — yet she blames the tragedy entirely on Natalie, who reported June’s illicit meetings with the woman to the authorities. In retaliation, June convinces the other Handmaids to ostracize Natalie, and smiles smugly as Natalie grows more and more distraught.

June’s refusal to consider Natalie as anything other than a one-dimensional tool of Gilead — and the show’s implicit agreement by neglecting to provide any perspective outside of June’s — feels especially frustrating when weighed against the show’s portrayal of Serena Joy (Yvonne Strahovski) and Aunt Lydia, two of its primary antagonists. Over the course of the series, Serena has held June down while she was raped, beaten her, locked her up, kidnapped her child to raise as her own, and threatened to have her killed. Yet the series has never failed to seize opportunities to humanize Serena, whether in flashbacks of angry mobs attempting to oppose to her right to free speech, in whispered commiseration with June over their shared “motherhood,” or in her decision toward the end of season three to betray her abusive husband in exchange for a few tender moments with her stolen “daughter.”

Similarly, The Handmaid’s Tale has no shortage of patience for Aunt Lydia, the tyrannical enforcer over the Handmaids. For every scene of Lydia handcuffing women to hot stoves or beating them up, the series has always been quick to offer a reminder that she's not all bad. At least she doesn’t want the Handmaids’ mouths sewn shut. At least she gave Janine (Madeline Brewer) a pretty patch to cover up the scars of her missing eye (an eye that Lydia had punitively removed in the first place). No matter how vile Serena and Lydia’s choices and actions are, redemption is never fully swept off the table.

Not so for Natalie, who never gets an empathetic flashback to help us better understand her. Forget redemption; Natalie isn’t even entitled to a second chance, much less the third, fourth, and fifth chances June gets. Ultimately, June’s cruel treatment proves too much for her; she snaps, assaulting another Handmaid in a grocery store before stealing a Guardian’s gun and pointing it at June. For other characters, there might still be a path back into Gilead’s good graces after this — after all, when Emily (Alexis Bledel) stole a car and used it to run over a Guardian, she was merely arrested and sent to the Colonies — but when Natalie picks up a gun, that’s it for her. Strike one, she’s out. She’s shot in the back, her body twisting grotesquely in the air before collapsing to the floor.

In her final episode, a comatose Natalie is kept on life support as an incubator for her unborn baby, as doctors manhandle her body and talk about her as though she’s disposable. June, for her part, contemplates killing her, not out of a sense of mercy, but because she’s tired of having to sit vigil over Natalie’s hospital bed.

But the problem with Miller’s approach, and with the largely colorblind dystopia of Gilead, is that it has its origins in this world.

In the end, Natalie is left to die on an operating table, after having her baby cut out of her via c-section. June apologizes, but it feels like too little, too late, especially when June foists most of the blame for her actions onto Gilead’s shoulders. “They just take everything from you, you know?” she muses at Natalie’s unconscious body, before vowing to find Natalie’s four children and get them out of Gilead — a promise that feels less about the brutalized, dying woman in front of her, and more about setting up June’s “save the children” plotline for the end of the season.

It’s not that The Handmaid’s Tale owes its audience nuance and backstory for every character. Plenty of recurring characters, including most of the Handmaids and Marthas, aren’t ever seen outside the confines Gilead. But in our real world, where people of color are still underrepresented in Hollywood (along with practically everywhere else), it feels significant that a show with the high profile of The Handmaid’s Tale chooses not only to ignore the intersectional identity of one of its few characters of color, but strips her of every bit of her agency, reducing her to little more than a prop to be poked, prodded, carved up, and ultimately discarded.

It may be too late for Natalie, but there could still be hope for The Handmaid’s Tale. Diverse casting is a start, but representation isn’t a matter of simply arranging actors of color on TV screens. One hopes that season four of The Handmaid’s Tale acknowledges what these past seasons have ignored: Changing the racial identities of its characters should, in fact, change the story.

More like this
Netflix’s ‘Yasuke’ is more evidence that the future of anime is Black
By Terrence Sage
The connection between climate anxiety and white fragility
By AJ Dellinger
Mental health TikTok is vast and daunting. Here are 5 actually helpful accounts to follow
By Joseph Lamour
Stay up to date