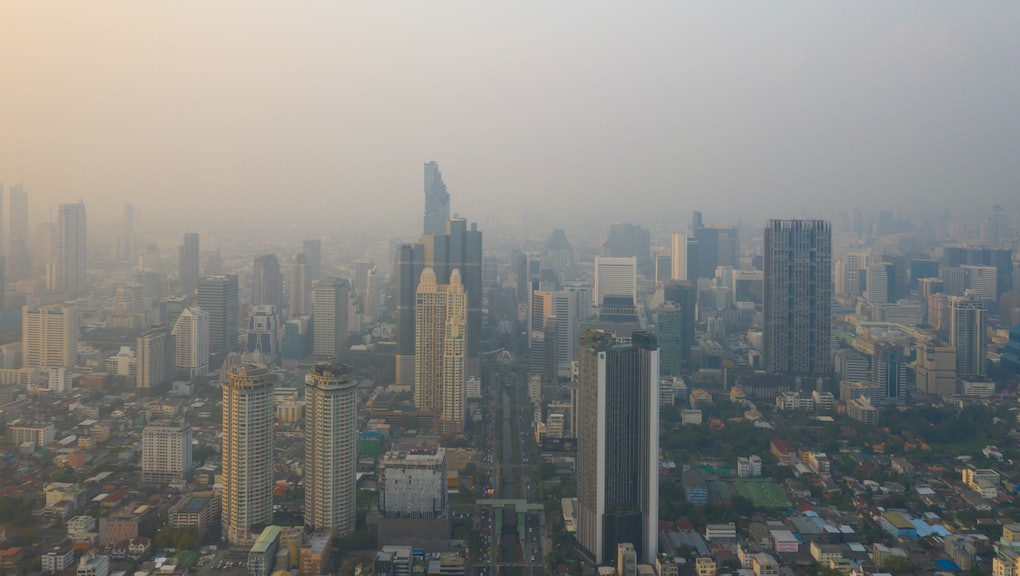 Ever heard the phrase "sharing is caring"? You probably don't want to hear it in relation to air pollution, though. Unfortunately, according to a recently published study, that's exactly what's going on in the United States. Scientists studying the air quality in the U.S. have found that about half of all premature deaths caused by poor air quality are due to pollutants that come from other states.

According to the researchers, about five to ten percent of all premature deaths in the U.S. are linked to outdoor air pollution. They took a look at the sources of the air pollution in the continental U.S. — namely, power generation, transportation, aviation, and commercial and residential heating — the see how it effected residents in the area. What they found was interesting: There was evidence that some states created pollution that tended to travel to other states instead of stay within its place of origin.

Wyoming and North Dakota, for example, produced a number of pollutants that led to very few air quality-related deaths in their area. This is due to the winds that pushed the pollution towards the east coast. There, states like New York suffered the most from out-of-state pollution; 60 percent of New York's air quality-related deaths are from sources that are out-of-state. It's a number that prompted the researchers to call New York the "net importer" of early deaths.

In contrast, almost all air quality-related deaths in California were caused by pollution that came from within the state. This could be due to pollution caused by wildfires, though the researchers didn't look into it for their study. The team focused on more long-term sources of pollution like generating energy. However, the head of the study, Dr. Steven R.H. Barrett of MIT, noted to The New York Times that the wildfires could become relevant to future studies if they continue to occur so regularly.

Regulations that established fuel standards and emissions from vehicles have also lowered the death rate, stated Dr. Barrett. We're now at the point where — thanks to federal regulations that have made progress in the transportation and power generation sectors — the number of emissions from residential and commercial heating have become the leading cause of cross-state, air quality-related, early deaths. This discovery indicates where policies and regulations should target next, Dr. Barrett explained to The New York Times.

"The cross-state rule was pretty effective," added Michael Brauer, an environmental health specialist who wasn't part of the study, to The New York Times. "We need to not relax rules like that."

Unfortunately, the agency in charge of these policies is the Environmental Protection Agency (EPA). Under the current administration, the EPA has been threatened with budget cuts, rollbacks of existing policies, and a number of attempts to undermine scientific data. While the cross-state rule seems safe, for now, the efforts to overturn other policies could possibly shift the improvements we've gained over the years.